Over the past five years, Scandinavia has entered a golden age (of sorts) in television. That’s not to say that their television has ever been particularly bad, per say, but recently these countries – particularly Denmark – have offered some of the most original, challenging and engaging shows around (typically dark, atmospheric police procedurals). People who live in Britain will likely be familiar with the majority of this list, but thus far US cable companies have been reluctant to show most foreign television, likely assuming audiences can’t be bothered to read subtitles. Anyway, without further ado…

Following the very successful series Matador, which followed the lives of characters in a Danish town before and after German occupation in World War II (airing between 1978 and 1982), the creative minds behind Danish television had a difficult time distinguishing themselves from its legacy. Each new show suffered from a ‘Matador complex’, where critics would unfavourably compare the new show to its much-loved precursor. However, towards the end of the 1990s Danish TV enjoyed a resurgence in popularity, and Unit One – along with other shows such as TAXA and eventually The Eagle – was a product of this. While in many ways it could be seen as a prototype of superior shows to come, Unit One was nevertheless an engaging police procedural drama, which distinguished itself with its willingness to tackle difficult social issues such as sexism and corruption. The character of Ingrid Dahl, recently promoted to homicide chief, is similar to Prime Suspect’s Jane Tennison (and many of the other female protagonists on this list) in her battle against institutionalised sexism, although arguably she lacks the balls that make her other counterparts so memorable. Yet I suspect that, without Unit One, Danish television would never have developed in such a satisfactory way. It ran for an impressive four years, won several awards (including an Emmy) and even had a young Mads Mikkelsen playing a psychotic cop. Definitely worth watching, if only to see how it all began.

It seems wrong having such a successful and well-loved show so low on this list. But with such strong competition, Denmark’s bleaker counterpart to The West Wing unfortunately sits at a (still respectable!) number four position. One of the few popular Scandinavian shows on this list yet to receive a English-language remake (probably due to the abundance of US political dramas in existence), Borgen’s most notable feature was its strong female protagonist, Birgitte Nyborg Christensen, who becomes the first female Prime Minister of Denmark. Unlike much American drama, it placed an emphasis on political developments above typical family-based drama – a challenging concept for audiences to commit to, particularly when having to keep up with complex Danish names via subtitles, but one which was incredibly rewarding. Even the slightly less brilliant third series was still, well, brilliant.

One of the more bleak offerings in an already bleak list, Wallander gathered international attention when a widely-praised English language remake starring Kenneth Branagh was released. Yet neglecting the original Swedish series, based on Henning Mankell’s long running book series, would be a mistake. Kurt Wallander is an excellent anti-hero, an idealistic but troubled cop, whose only friend is his beloved dog. It distinguished itself from more conventional American thrillers by focusing on character, mystery and suspense as opposed to bombastic action sequences. The show is beautifully shot, too – each episode feels like its own film (so much so that several of the episodes were released in cinemas). And out of the three incarnations of the detective, Krister Henriksson’s measured performance is probably the best. Sorry Rolf Lassgård.

This one’s a good one to catch up with, simply for the fact that it’s still going (the second series premiered on the BBC last Sunday). Despite initial impressions of a typical Scandi-noir murder mystery, The Bridge soon distinguished itself with several qualities; 1) the fact that it was a joint Swedish-Danish production, 2) the remarkable ambition of its storyline (a villain similar to the Joker is going around killing/tormenting people in creative ways), and, most importantly, 3) the excellent cop duo of Swedish Saga Norén, a clever yet comically insensitive detective somewhere on the autistic spectrum, and Danish Martin Rohde, a family man who proves to be the perfect foil for his partner. It’s an imaginative, perfectly paced ensemble story with a heart-crushingly sad ending, so good that it was remade TWICE (the FX series with Diane Kruger and Demián Bichir, another French-English production called The Tunnel with Stephen Dillane and Clémence Poésy). Yet the original is perhaps some of the best television of the past ten years, only to be eclipsed by one other… 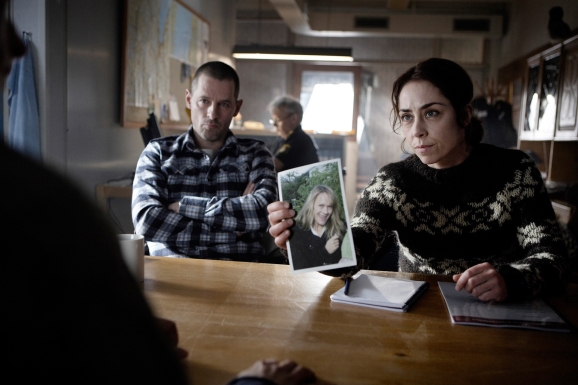 What else can I say about The Killing which hasn’t already been said? Likely the best TV series to have ever emerged from Denmark, it was remarkable for devoting equal emphasis to the three concurrent storylines of the police investigation, the victim’s family and the political side-effects of the murder – as well as being elevated by the presence of a superb jumper-wearing heroine, Sarah Lund, played magnificently by Sofie Gråbøl. The mystery itself was absorbing, but the real focus of the series was the damage the investigation had on the main characters. Lund is relentless, pursuing a seemingly endless stream of suspects, all the while alienating herself from everyone close to her. The families of the victim are sucked into a maelstrom of grief, and political candidates are faced with obstacles and corruption; Lars Mikkelsen (brother of Mads) was particularly good as idealistic mayoral candidate Troels Hartmann in the first series. It was also distinctive in its evocation and photography of Copenhagen as a murky, noir-ish city of abandoned warehouses and threats in the shadows. The show ran for three series, all of which were good – admittedly, by the end there was a rather predictable formula emerging, but the initial 20-episode run was undoubtedly one of the greatest TV murder mysteries of all time. Don’t make the mistake of thinking you don’t need to watch this show if you’ve seen the AMC remake – it pales in comparison to the original.

Scandinavian television is currently as good as it’s ever been, and the progression from the warm melodrama of the 1970s and 80s (to which Matador belonged) to the grittier police procedurals of the late 90s and 2000s has been hugely beneficial to both Sweden and Denmark’s artistic reputation. Attention from the BBC regarding Wallander and The Killing has also helped the shows on this list succeed internationally – The Killing’s third series on BBC Four peaked at over one million viewers – as well as bringing to our attention overseas talents (Both Mads and Lars Mikkelsen are now enjoying international success, the former starring in Hannibal and the latter playing the villain in an upcoming episode of BBC’s Sherlock).

Of course, I couldn’t possibly cram every show I wanted to in this list, and some honourable mentions go to The Eagle: A Crime Odyssey, another very good police procedural drama, but not quite distinctive enough to make it on the list; the decent adaptations of Jan Arnal’s Arne Dahl novels, although I felt this strayed too close to Wallander territory; and Lars Von Trier’s bizarre mini-series The Kingdom was considered for how, uh, different it was. Residents of the US will have a relatively tough time trying to find a legal way to watch these shows, although The Killing and The Bridge are both available on UK Netflix, as well as some episodes of Wallander.