My Love Story!!: More Than Meets The Eye

My Love Story!! (Ore Monogatari!!), the shoujo-manga-turned-anime (and soon to be live-action film), has stolen hearts worldwide – all at the drop of giant Takeo’s signature sparkly-eyed thumbs-up. The newly released anime has created a fandom filled with teary-eyed reformed love-cynics hugging their laptops at one in the morning, flooding the Internet with screencaps of their favourite burly protagonist and his pint-sized love.

At first glance, the story looks like an exhausted trope: conventionally unattractive boy (the beast) wins over conventionally attractive girl (the beauty) through his “amazing” personality (aka treating said girl as the human being she deserves to be treated as). However, like our oafish protagonist Takeo Gouda himself, there is a lot more to this anime than meets the eye.

The Red Ogre: Appearance and Isolation

The overarching framing narrative of the first few episodes of My Love Story!! tells the tale of The Red Ogre. The red ogre lived in isolation, but desperately wanted to gain the trust and affection of the humans. Despite his good intentions, the humans are terrified of the ogre because of his gigantean size and frightening appearance. Takeo Gouda, the now high school freshman, was once nominated by his kindergarten class to play the red ogre in their school play because of the resemblance. Takeo whole-heartily agreed and played the red ogre alongside his best friend the blue ogre, Makoto Sunakawa.

Suna, as Takeo affectionately addresses Makoto, appears to be nothing but a cliché stereotype himself, with his conventional good looks and detached personality. He is seen rejecting any girl who falls in love with him (the girls being ones that Takeo himself has fallen for), rendering him vapid and cold. Yet through this telling of The Red Ogre, the two characters are fleshed out and realized as dimensional and complex individuals. In the fable, the blue ogre is a friend of the red ogre and lives alone in the mountains as well. During one of his visits, he tells the red ogre that he will help him by causing chaos in the humans’ village, and allowing the red ogre to chase him away and gain the trust of the villagers. After doing so, the blue ogre disappears. Whether or not this narrative will foreshadow the rest of the anime is unclear, but the fable itself lends its development to Suna and Takeo and brings them to life.

Suna and Takeo, like the lone ogres, exist marginally in the world. The anime insinuates an interesting commentary on society and its prescience on appearance. While Suna is incredibly popular and girls practically fall at his feet, he actually does not have any friends apart from Takeo. After years of noting the incredible difference in treatment the two receive based solely on their appearances, Suna has grown wary and resentful of those around him. The two spend the majority of their time together. It is not until they meet Takeo’s love interest, Rinko Yamato, that they reintegrate and escape the world they have locked themselves in.

The Beauty who Loves the Beast

Rinko, a petite and typically cute girl, also manages to prove herself to be a complex and trope-defying character. She truly thinks Takeo is the best looking guy she’s ever seen, and is genuinely concerned that Takeo will be too popular amongst girls. Takeo says that she has a “huge misunderstanding” in thinking that he is popular with girls, and has to explain to her that she and Suna are the only two people who find him “cool.”

Regardless, it isn’t a case of Rinko looking past Takeo’s unusual features and size. Rinko is in love with everything about Takeo and has difficulty believing that the rest of the world doesn’t see the same. It is this development in the anime that sets it apart from the worn-out story that falsely advertises the promise of “it’s what’s on the inside that counts.” Takeo’s character design is almost startling at first, it’s not the kind of “unattractive” anime audiences are used to – generically attractive boy who wears glasses and through a mahou shoujo type of transformation (aka taking off his glasses) suddenly becomes all the more attractive. Such tropes suggest that less-attractive people should either transform themselves to fit societal standards or find someone who is able to look past these faults and love you for who you are “inside.” But, as My Love Story!! argues, why settle for that when everyone deserves to be with someone who thinks you are the hottest thing around just as you are.

Takeo himself fails to see his own charm, and has accepted his fate as the lonely red ogre on the mountain top. Takeo believes that he is not desirable – he is not handsome, smart, or cool the way that Suna is, and so he wholeheartedly claims his position as Suna’s faithful “cheerleader.” Unlike Suna, Takeo hasn’t let the way the world has treated him hinder his giant heart. He does everything in his power to keep everyone around him happy, even if it means trying to bring Suna and Rinko together, despite his feelings for her. He uses the example of a song that Rinko and Suna discuss after he chases down a woman to return her child’s shoe. Suna describes the song as being about a bear who chases down a woman who has lost an earring. The song says they end up dancing together, but as Takeo adds “she does not fall in love with the bear.” It is suggested that Takeo still holds some doubt that Rinko’s feelings for him are real. On the flip side, Rinko interprets the song as thinking Takeo’s charm will win him the heart of other girls.

One of the most beautiful girls in the show falls in love with Takeo after he compares her to a flower. In the touching scene, the young girl struggles with her own self-image as her schoolmates compare her to a frightening statue with long, wiry limbs called “The Growing Statue.” After walking home from school one day, Takeo tells her that she reminds him of something. She sighs, anticipating that he will mention the statue. But to her surprise, Takeo points to a beautiful arrangement of white lilies. However, she never tells him of her true feelings for him.

Takeo still maintains that he is “unpopular,” and unfortunately it appears to be true as he faces daily judgement from those who don’t know him. Upon meeting Rinko’s school friends for the first time, it is evident that they will make no point of hiding their disappointment. Rinko and Takeo overhear their conversation where they refer to Takeo as being “barely human,” a “gorilla” and that they couldn’t believe Rinko would “have the guts to be seen with him.” Rinko is both hurt and surprised, but Takeo reminds her that there “are all kinds of people” and that he is just fine. Takeo is used to this kind of treatment, while it is all new to Rinko. Yet instead of doubting Takeo and listening to her friends, Rinko is all the more impressed by Takeo.

What Takeo strives to be instead is the “manliest of men,” a phrase he is often found saying throughout the show. The phrase seems apt since he seems to be the epitome of idealized masculinity, but that is not what Takeo means. Takeo is often found using the phrase to challenge the idea of masculinity. He coins his friend Oda a “real man” after Oda confesses his feelings about a girl who does not feel the same for him. Oda says that it’s fine if she loves someone else, that he might even cry a little bit, but he’ll embrace his own feelings and all to spend time with her. Takeo is moved by this, and feels that this compassion makes Oda a real man.

Takeo has also proved himself to be a feminist. When he initially meets Rinko, she is being harassed on the train by a groper. Takeo takes it upon himself to help her and seeks justice for her against the offender. He brings the man to the train station’s security, but doesn’t stop there. When the man accuses Rinko of “asking for it,” Takeo, who is almost always true to his gentle-giant nature, loses his temper and clobbers him.

My Love Story!! manages to challenge well-established tropes in the romance genre and creates a warm, heartfelt plot with well-developed, dimensional characters. It breaks down the idea of “attractiveness,” nuancing its meaning and making its audience question the shallow societal norms we participate in daily. While it appears to be nothing more than another romance anime, the stereotypes and barriers it dares to break results in a giant leap forward for the genre. It’s a modern love story (throwing in humorous new-age slang like “selfie” and bromance”) that gives us a little hope that romance might not be dead after all. 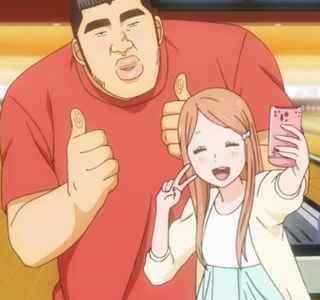