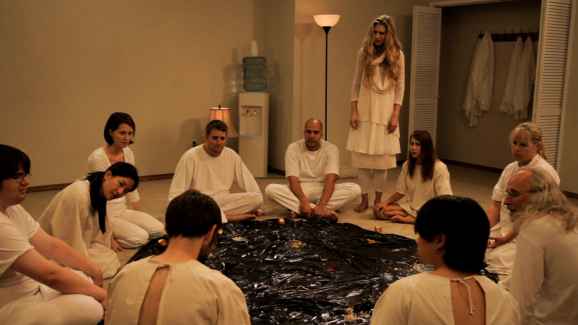 To paraphrase a really, really, ridiculously over-used, but funny/apt, quote: cult movies are so hot right now. We’ve had ’em before, but boy, they’re good this year. We’ve been blessed with the creepy, slow-burning Martha Marcy May Marlene; the meditative majesty of The Master; and the documentary-style Sound of My Voice, which thoroughly succeeds in being worthy of the culty company it keeps.

We begin with a teasing premise: a journalist named Peter, along with his girlfriend, infiltrate a cult in order to expose the perceived dangerous lies of its leader Maggie (Brit Marling) who claims to be from the year 2054. Whilst investigating, the couple (particularly our journalist friend) become charmed and impressed by the serene, charismatic Maggie.

This is Brit Marling’s second actor/writer credit after the high-concept Another Earth, which marked Marling as one to watch. Its combination of philosophy and speculative fiction is a real winner, and I’d highly recommend seeking it out. With such a strong predecessor, Sound of My Voice faces an uphill struggle to continue the momentum that Marling had created. Thankfully, the momentum continues as Marling pulls us into a world with three questions for every answer and a shroud of mystery that makes for one of the most intriguing films I’ve seen all year.

Keep in mind that this is a slow film. It creeps up on you very easily, quite like the manipulative Maggie herself. However, some scenes are nothing short of show-stopping, and lose no power in their grainy docu-style format, thanks in large part to the delicate touch of director and co-writer (and awesomely-named) Zal Batmanglij. Batmanglij succeeds in show-over-tell technique, wherein he simultaneously manages to keep things spare and brimming with the possibility of meaning. Standouts include a scene where Maggie encourages her floor-sitting followers to vomit to purify themselves, which sees the unsettling influence of Maggie in full effect with disorientating – and implicating – shots that match the positioning of the followers. The end scene, which will either infuriate or amaze, is also perfectly set; a good case of the director knowing when to take a backseat in a scene that is inherently startling. 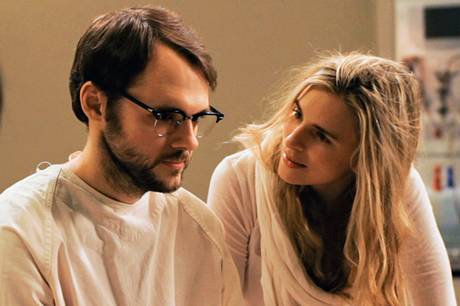 The performances are consistently strong. Christopher Denham makes an impressive turn from cat to mouse as the conflicted journalist, whilst Nicole Vicius strikes the right balance between supportive and irritating to add substance to the character of his girlfriend. But make no mistake about it: Brit Marling is the star of the show here. Frail, beautiful, beguiling and somewhat sinister, she has herself a signature role here with Maggie. Marling’s aloof approach actually makes it appear as though Maggie would crumple like paper if you touched her, but that she also holds the potential to destroy with her words. One scene in particular stands out most in that regard. Maggie plays a song that she knows from the future, which is actually a very familiar-sounding Cranberries song. When questioned, she attacks in a cold and collected manner, shifting from an angelic songstress to a calculating predator – all whilst maintaining perfect grace. One thing to keep in mind as you watch is just how emotionally engaging the material is. Whilst it doesn’t quite overpower or awe in the way that The Master does, the characters are a lot less frosty than in Paul Thomas-Anderson’s awards-baiting epic. Ultimately, characters feel more human here, rather than straying into territory that would make the characters appear as surrogates for ideas or archetypes. The players benefit greatly from a script that keeps proceedings grounded in the personal rather than straying into a conceptual mess, which is a pitfall that Sound of My Voice deftly sidesteps.

The plot beats are consistently engaging, and manage to paste over some underdeveloped elements. The relationship between Peter and his girlfriend Lorna feels natural but under-cooked, whilst there is always a nagging feeling that there are too many interpretive strands to follow at once. The latter “flaw” is in some ways a great asset to the film, as it will provoke question after question in your mind, begging you to come back and submit to its hold.

Note: head over to the official site to watch the first 12 minutes of the film.

Posted on Dec 12, 2012 by
David Tatlow
You can call me Tatt. I like all kinds of films, as well as talking to/boring people about them at great length, so brace yourself.
Follow