Star Trek and Society’s Ridicule of its Early Fans 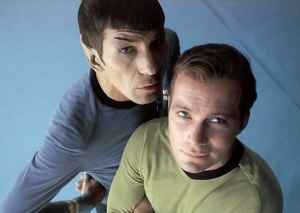 Every year the entertainment world shifts its attention to sunny California for San Diego Comic-Con International. All sorts of people attend the event, from professional cosplayers to young children on a family vacation. On top of that, several high profile celebrities lead fans to wait hours on end in lines for Hall H that make the waits for Disney World attractions laughable. Top tier companies like Marvel and DC descend upon the San Diego Convention Center to take advantage of the abundance of consumers on site. Various media outlets cover the event, such as The New York Times and Entertainment Weekly, not to mention the countless vlogs and reactions from prominent YouTube channels. The event has become so popular that the 130,000 tickets for the 2014 convention were sold out within minutes of becoming available (Lieu).

While fan conventions like San Diego Comic-Con International carry a festival-like atmosphere celebrating fandoms across all genres, society was not always so accepting of this kind of fan culture. One only needs to look at what the fans of Star Trek have endured over the years to understand that fans used to be dismissed as “others.” This concept is hard to believe in the year 2016 as Star Trek celebrates its 50th anniversary. However, Star Trek fans faced constant ridicule when the series was first released to the point where they felt unwelcome in mainstream culture. Anti-fans spread the message that being classified as a Star Trek fan was undesirable, so people should avoid expressing any knowledge or appreciation of the show so as not to be labeled as outcasts. Though materials ridiculing Star Trek fans can be uncovered in a variety of media, this article will focus specifically on portrayals of Star Trek fans in television.

Before the birth of television, science fiction found its home in magazines and books. This landscape began to change in the 1960s, especially with the first screening of Star Trek for fans at Worldcon in 1966. Once Star Trek landed on television, it “struggled for ratings the entire time it was on the air, and perhaps this pushed its fans to become more vocal and participatory” (Copa). As a result, other science fiction fans took notice, and “many traditional fans, whose culture continued to be centered around professional science fiction magazines, dismissed Star Trek as science fiction for nonreaders” (Copa).

One might ask what the motives of these literary science fiction traditionalists were in ridiculing Star Trek fans. There were many reasons literary science fiction fans felt the need to distance themselves from Star Trek fans. People think fans “overvalue or overestimate the importance of their object of fandom” (Stanfill). People also envision fans as “extreme in their obsession with acquiring as much information about the object of fandom as possible. This intemperance and its associated lack of control sometimes takes a more sinister form, constructing fans as confused about the distinctions between fantasy and reality, which leads to connotations of insanity and lack of behavioral and affective boundaries” (Stanfill). Furthermore, “stereotypes about fans condemn who they are as people instead of what they do” (Stanfill). Because fans lack real relationships, they must create imaginary ones with the characters from their show. This paints a picture of immaturity and builds on the confusion between fantasy and reality. Finally, “fandom is often devalued as feminized — comprised of either insufficiently masculine men or hysterical women” (Stanfill).

Literary science fiction traditionalists wanted to avoid being characterized with these traits, so they took measures to ridicule and therefore distinguish themselves from people like Star Trek fans. In terms of visual signifiers, Star Trek fans are commonly identified as overweight and wearing large glasses and Vulcan ears, not to mention the colored shirts as seen on the show (Jenkins). One journalist even went as far as to describe Star Trek fans as “smelling of assembly-line junk food, hugely consumed; the look is of people who consume it, habitually and at length; overfed and undernourished, eruptive of skin and flaccid of form, from the merely soft to the grotesquely obese” (Hale). Anti-fans also regularly resort to name-calling, degrading Star Trek fans using words such as “gay” or “nerds.” All of these techniques serve to ridicule Star Trek fans and make them seem unappealing to other science fiction fans.

One of the most popular examples of ridiculing Star Trek fans on television comes from William Shatner’s 1986 Saturday Night Live “Get a Life!” sketch. All of the common visual tropes of Star Trek fans are on full display, from the Vulcan ears to the glasses and colored shirts. The sketch propagates some of the familiar messages about Star Trek fans. They are portrayed as “brainless consumers who will buy anything associated with the program or its cast,” they “devote their lives to the cultivation of worthless knowledge,” they “place inappropriate importance on devalued cultural material,” they “are social misfits who have become so obsessed with the show that it forecloses other types of social experience,” they “are feminized and/or desexualized through their intimate engagement with mass culture,” they “are infantile, emotionally and intellectually immature,” and they “are unable to separate fiction from reality” (Jenkins). In the end, William Shatner, the actor who played Captain Kirk, becomes so exasperated from having to answer questions like confirming the combination used for a safe in a particular episode that he demands that the Star Trek fans at the convention “get a life!”

A similar portrayal of Star Trek fans can be seen in season seven episode eleven of Family Guy, “Not All Dogs Go to Heaven.” Two Star Trek fans bicker at a Star Trek convention over the specifics of plot points. Once again, the two fans appear to be middle-aged men, overweight, and wear glasses and the colored Star Trek shirts. They are even called “nerds” by two of the actors from Star Trek, who then proceed to beat up the two fans.

In “Black Friday,” the seventh episode of the seventeenth season of South Park, Star Trek is parodied. The Star Trek fans are identifiable by their clothing and Vulcan ears, and they are characterized as “dorks.” Their sexuality even gets called into question as one of the characters says “they’re so gay.”

This stereotype dealing with the sexuality of Star Trek fans also appears in a clip from The Cleveland Show. In the clip, one of the characters complains that the decision he is facing is “harder than identifying a rapist at a Star Trek convention.” The scene then cuts away to two police officers interviewing a female rape victim. One of the officers asks the woman if she can describe the assailant. The woman says, “He was a white male, thirty-five to forty-five years old, glasses, bad skin, about fifty pounds overweight, smelled like Cheetos, and was carrying a poster with a Sharpie pen.” The shot expands to show a mass of Star Trek fans. The other officer declares that he knows what to do, and proceeds to ask who in the group is not a virgin. Only one hand is raised, and that person is placed under arrest.

Returning to the G.A.L. flyer referenced earlier, one can see a few of the Star Trek fan stereotypes that have been discussed. The flyer boasts “monthly laundry excursions,” learning how to speak Klingon, and memorizing every detail of the Starship Enterprise. This reinforces the perception of Star Trek fans compiling useless information and appearing unkempt.

Mainstream culture’s acceptance of the Star Trek fandom has come a long way since Star Trek: The Original Series aired in 1966. One can argue that Star Trek really became a mainstream hit with the premiere of Star Trek: The Next Generation in September 1987. The two-hour pilot for The Next Generation, “Encounter at Farpoint,” attracted the attention of 27 million viewers (Vary). By early October 1987, more than 50 of the Big Three network affiliates preempted their own shows to broadcast “Encounter at Farpoint” (Harmetz). Viewers were not the only ones excited to board the Enterprise for a new adventure every episode. The Next Generation earned high critical praise as well. The show won 18 Emmy Awards, five Saturn Awards, two Hugo Awards, and the Peabody Award for excellence in television programming. In addition, it spawned three spin-off shows (Star Trek: Voyager, Star Trek: Deep Space Nine, and Star Trek: Enterprise) thanks to its popularity and viewership.

In more recent years, J.J. Abrams has successfully rebooted the franchise, directing 2009’s Star Trek and 2013’s Star Trek Into Darkness and producing the latest release, Star Trek Beyond. Amid critical praise for Beyond, Abrams announced plans for a fourth film (Chitwood). If these new films are not enough for the Star Trek fandom, back in November 2015 CBS announced that Bryan Fuller and Alex Kurtzman were creating a new Star Trek television series called Star Trek: Discovery, set to premiere in January 2017.

Rather than being ridiculed, the Star Trek fandom is now celebrated in mainstream popular culture. Star Trek fans no longer have to isolate themselves at their own conventions. Instead, they can take center stage at the world’s biggest convention in San Diego. With a new film and television series on the horizon, Star Trek fans can confidently go boldly into the future. In short, it is a great time to be a Star Trek fan.

[4] Stanfill, Mel. “‘They’re Losers, but I Know Better’: Intra-Fandom Stereotyping and the Normalization of the Fan Subject.” Critical Studies in Media Communication 30.2 (2013). Print.

Posted on Aug 31, 2016 by
KennethC
I have a bachelor's in history and communication. When I'm not pretending to be a Jedi Knight, I can be found reading, playing video games, and watching television and film.
Edited by Lauren Mead, Munjeera, Tigey, danielle577, enizzari, Shiah.
Follow