Super Indian: The Making of a Superhero “Rez” Style

Arigon Starr is clever and witty with her play on words and her awareness of cultural appropriations in the Super Indian comics. She addresses issues and concerns within the Native American community while keeping Super Indian entertaining. Starr also uses contemporary references to the Twilight and Underworld saga, including vampires and werewolves as well as zombies, skin walkers, Star Wars and a poke at Pokémon. Furthermore, she provides educational materials to tell the reader about “Real Indian Super Heroes.” Moreover, Ms. Starr who is from the Kickapoo Tribe gives an interview about her brilliant creation of Super Indian.

Super Indian Volume One: the making of a superhero “rez” style begins with the introduction of heroes, community members of the reservation and the “Circle of Evil.” Superhero Hubert Logan grew up on the reservation and works at the Bingo Hall as the janitor. In his youth, Hubert attended Derek Thunder’s birthday party. Derek was the bully on the Reservation. At Derek’s party, there was commodity cheese, tainted with “Rezium.” The Government Research Scientist Dr. Eaton Crowe developed Rezium to solve world hunger which would guarantee him a Nobel Prize. However, Hubert and Derek ate way too much of the tainted cheese, and they developed super powers. Derek’s powers work for the evil part in the story and Hubert’s super powers are virtuous and protective of his people. 1

Super Indian Volume Two weaves Reservation life with the creature features of mainstream media. In this issue, there are vampires, zombies, skin walkers, and werewolves. In addition, the reader meets a new superhero Ka’Waika Woman. Super Indian Volume Two blends the subtexts of American history with contemporary mainstream media to tell a story of greed and heroic powers. In the simplest expression, the European invasion changed the makeup of the indigenous bloodline which is the focal point in Super Indian Volume Two. Blud Kwan ‘Tum, the Spanish villain who is also a vampire needs to become full-blooded Indian, so he could secure the Chicomoztec gold. Blud, began his quest to be a full-blooded Indian and drained his victims; the victims then turned into zombies. The Reservation became full of Indian zombies. Blud captures Super Indian because he is the last of the full-blooded Indians on the Reservation. Diogi and Mega Bear get help from superhero Ka’Waika Woman to save Super Indian and rid the Reservation of Blud the evil European Vampire. 2

A Guide to “Rez” Speak

The key to cultural understanding is respect and communication. Arigon Starr provides a cheat sheet to understanding some of the cultural terminology within Super Indian.

“Rez” is an abbreviation for reservation. It is also an endeared term for home and culture and can apply to any place Native Americans gather.

CDIB Card/Tribal Enrollment Card/Credentials– A Certificate of Degree of Indian Blood (CDIB card) This card is issued by The Bureau of Indian Affairs which is an agency of the US Department of the Interior. This certification measures specific degree of Indian blood from the 562 federally recognized American Indian Tribes. However, this card does not automatically assign tribal membership. Each tribe has its own membership criteria based on shared customs, traditions, language in addition to tribal blood.

Pow Wow-Native American and Canadian gathering that lasts for a weekend to celebrate connections to tradition and spirituality with dance, song and honoring the past and rejoicing the future.

Snag– A girlfriend or boyfriend

Frybread- Deep fried dough made from flour, salt and water. This was a product of necessity due to poor quality food rations and this was made for survival. It is now an icon and loved throughout Indian Country.

Pawnee– Members of the Pawnee Nation whose reputation precedes them as fierce, proud warriors. 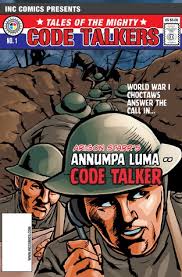 Super Indian comics contain full-page inserts of historical information on the accomplishments of “Real Super Indians.” These Real Super Indians are indigenous people who have been recognized within the mainstream culture; for example, Jim Thorpe, Will Rogers, Maria Tallchief, a Prima Ballerina and Susan La Flesche Picotte, MD- the first female Native American Doctor. Ms. Starr also created another comic that features a group of Real Super Indians in Tales of the Mighty Code Talkers. This comic is produced by INC Comics and is about World War I Choctaws and the contribution they made by using their native language skills. Tales of the Mighty Code Talkers also addresses the subjugation of indigenous people and the length of time it took for The Mighty Code Talkers to be recognized for their contribution to World War I. 4

Arigon Starr speaks with Venus Echos about the creation of Super Indian.

Venus Echos : Super Indian invites the mainstream culture into their subculture; do you believe this invitation will open doors for communication? Or was Super Indian created mainly for the Indian culture?

Arigon Starr: The project was definitely written for the Indian community. Growing up reading comics, I was always waiting for someone that looked like me to appear alongside Batman, Spiderman, Wonder Woman, etc. Sadly, the characters that did show up in mainstream comics were full of the same stereotypes seen in films and television. I’ve been drawing comics since I was a kid, first copying from the pages of Archie and The X-Men, then later writing comic books about my favorite rock bands. I wanted to use the skills I’d been honing since then to express all the humor and love of family I grew up with at home. TV, comic book and film Indians never seemed to laugh or have fun. Plus, they never saved the day. They were always sidekicks. Some non-Native people who’ve read Super Indian didn’t understand the humor at all. However, most of the Native folks I’ve shared the work with are smiling and laughing before I get out my 30-second pitch, “He ate tainted commodity cheese and gained super powers.”

Venus Echos: I noticed your use of pop culture within Super Indian; what was your reason behind this? Perhaps, to draw in a wider viewer ship or maybe, to show that the people on the Rez are interested in these same forms of entertainment?

Arigon Starr: I definitely wanted to show that Indian people are contemporary and live in the now. Plus, I’m a big science fiction, comic book and genre fan. Including these references made perfect sense to me. I enjoy having my characters talk about Star Trek, Battlestar Galactica or debating which vampires are better – the ones from Twilight or Underworld.

Venus Echos: I appreciate your inclusion of historical material in Super Indian. How did this idea manifest?

Arigon Starr: Kids are a big part of the audience for Super Indian. I wanted to make sure young readers knew about some of my heroes (Jim Thorpe, Will Rogers, Maria Tall Chief and others), plus some that might be under the radar. It’s like Ripley’s Believe It Or Not with braids. I’m looking forward to including more historical and contemporary heroes in upcoming volumes of Super Indian. Additionally, I’m adapting some of the novels of Cherokee historian/author Robert J. Conley into graphic novels. There are so many fantastic, true stories in Indian country that need to be told to mainstream audiences.

Venus Echos: Do you see your comics as a catalyst to allow others of indigenous background to explore and contribute in their own creative way?

Arigon Starr: I certainly do. A few years back, a few of like-minded creative Natives decided to form an unofficial alliance, the Indigenous Narratives Collective. We’ve produced a couple of group projects and I look forward to helping another collaborative or anthology comic come to life. There can’t be enough American Indian voices doing this work. It’s a great way to get Native people involved in their culture and telling their own stories.

Arigon Starr: Additionally, the Heard Museum in Phoenix, Arizona are featuring Super Indian and other amazing Native American comic creators through August 23rd. Plus, the Department of Interior Museum in Washington, DC is featuring Super Indian in their “DOI Goes Pop” exhibit through Winter 2015. My comic writing is also featured in the recently published Moonshot: The Indigenous Comic Collection, Volume One from AH Comics in Canada. 5

Super Indian bridges two subcultures; the indigenous people of America with the Comic Con collective, which is making its way into the mainstream culture. While Super Indian educates and entertains the reader, the creator Arigon Starr demonstrates her cleverness throughout the comics. For example, Super Indian’s belt buckle is NDN, which is “Indian” Super Indian’s  dog is Diogi, which is pronounced as “dog,” and villain Blud Kawn’Tum is a play on words for the quantifiable measurement of a “full-blooded” Indian. Ms. Starr brings out many lessons on cultural appropriations, awareness and appreciation of the indigenous people. Super Indian is the new warrior leading the trail in contrast to the spent warrior in “ The End of the Trail.”