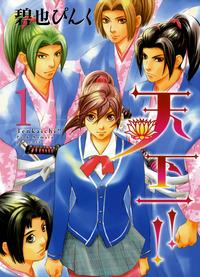 Tora Takei is your typical high school student, however her oppressive father who refuses to allow her the possession of a cell phone means that she’s unable to fit in with the other girls in her school. This leads her to feel depressed about her current social situation; therefore, she decides to take a walk so she can reflect. Whilst having lunch on this walk, however, she manages to ‘time-slip’ into the Warring States period! Things go from bad to worse as she’s sold into slavery and then forced to pose as a man so to attempt to become Oda Nobunaga’s page so she can gather information about his movements.

Popular culture involving Oda Nobunaga is becoming increasingly common, so whilst this manga’s context cannot be argued to be original, the twist, which Pink Aomata has put on the events concerning the historical figure, keeps the manga fresh (this twist is too much of a spoiler so I won’t give this twist away). To many the storyline may sound very similar to that of The Ambition of Oda Nobuna; however, other than the time travel aspect that the two titles share, (thankfully) they couldn’t be any more different. First of all, the story is much more historically accurate, as shown in the author’s comments at the end of the book. Pink Aomata has clearly done a lot of research and interviewed many experts concerning the creation of her story, as shown through her understanding of weapons and the social history of the time. Secondly, the demographic for the manga is on the other side of the spectrum (it’s a shojo title), meaning it is much more story driven and has a greater focus on the hardships women had to face during that period. Tenka Ichi!! doesn’t go without the odd instance of boob grabbing or Yaoi; however, the latter is only suggested and allows character portrayal whilst the former tends to allow story progression. Whilst these aspects did slightly detract from the story they weren’t enough to ruin my overall impression. Through Tora being forced to pose as a man the harsh realities that women had to face during this period are highlighted – often she is threatened to be used for sex for the benefit of others – this paired with the beatings she receives from her masters makes the story much darker and therefore, much more interesting to read.

Whilst the manga doesn’t have a clear overuse of screen tone or use the typical shojo style, panels do often feel bare and I felt that they lacked detail. However, when Aomata actually bothers to draw locations, the results are impressive and highly detailed. The characters on the other hand are all designed really well (except perhaps some of Nobunaga’s servants who I couldn’t help but find identical) and Tora herself is particularly well crafted. Her expressions nearly always give an insight into what she is thinking.

I would recommend this title if you are someone who would like to know more about Oda Nobunaga and the period that he lived in, but you can’t be bothered to dip into a large history book. If you are looking for a title that has an original concept and doesn’t contain yaoi or moe, then this may not be for you.

Posted on Nov 11, 2012 by
WillStocks
I really enjoy animation, manga and games. As well as writing articles I write plays and draw frequently. Follow me @stocksatron
Follow