‘The Hobbit’ at 48 fps: Scaling the Uncanny Valley

It’s far too easy for a 21st century filmmaker to overdose on technology. From James Cameron’s three-dimensional escapades to Robert Zemeckis’ “I’m gonna put a human face on this animated character” aesthetic (not to mention the vastly increasing number of films shot digitally), it sometimes appears as though these guys are more concerned about developing cinematic technology than their abilities as cinematic storytellers… unless, of course, their experimentation with what they believe to be the “next big thing” may actually enhance their craftsmanship. 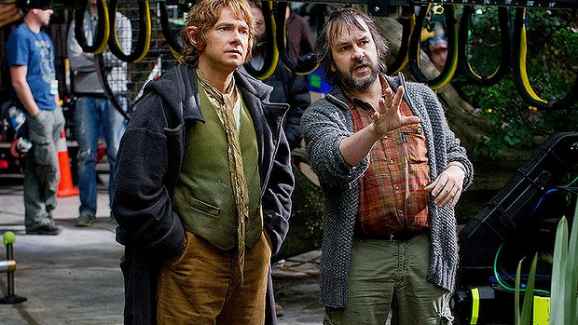 First, a few words about the movie itself. Peter Jackson’s first entry in his Hobbit trilogy, An Unexpected Journey, is not a bad film. It is actually a quite good one, and at moments, rather fantastic. It’s obviously nowhere near as perfect as Jackson’s Oscar-winning Lord of the Rings trilogy, but comparisons to George Lucas’ Star Wars prequels are, by default, unwarranted nonsense. As one might imagine with a mere 300-page book adapted into three feature-length films, The Hobbit tends to meander into elaborate subplots and scenes that are awkwardly transitioned into, matched by a structure that is oddly intriguing. Yet somehow, clocking in at nearly three hours, the film manages to be a consistently fun adventure, and despite Jackson’s pale attempt to replicate shining moments from his prior trilogy, the passion for J.R.R. Tolkien’s novel shines through clear as a Rivendell sunrise. Anytime Gandalf (played spectacularly, once again, by Ian McKellen) provides one of his monologues about the strength of little things, whenever Martin Freeman’s Bilbo finds the courage to break out of his Shire mentality, or even when we hear familiar music by Howard Shore, the initial reaction is to wipe away the tears that will inevitably form. However forced some scenes may seem, this thing works. For fans, it’s loyalty to the source material that will be a triumphant victory, and above all, this is a film made for them.

So how will these fans, among common moviegoers, come to accept Jackson’s decision of projecting The Hobbit in 48 frames-per-second (in 3D screenings at select theaters), rather than the traditional 24? The answer is almost completely subjective to the viewer. And despite numerous flaws, it is an experience I completely recommend. By definition, 48 fps displays more image content per second, claimed by Jackson, Cameron, and visual effects pioneer Douglas Trumball (2001, Close Encounters, The Tree of Life) to improve the stability and clarity of three-dimensional imagery. But it is also a betrayal that cinematic purists will not easily accept; after all, there is a reason film has always been projected at 24 fps. Although studies have proven that our minds recognize 66 frames per second, it is actually more accurate to claim that we recognize 40 moments per second. Therefore, when we watch a standard, 24 fps-projected film, it is easy for us to accept that what we are watching is, indeed, a film, not a replication of reality. We therefore perceive what we are watching within its own platform of onscreen reality; we recognize that it is “fake,” and because we do, it is easier for us to consciously “believe” it. 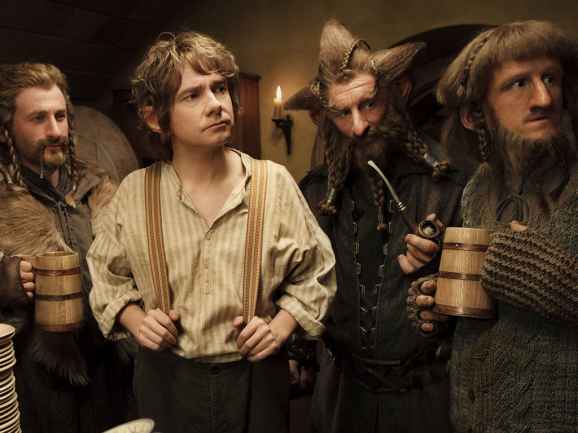 So Jackson, in an attempt to create imagery in radically high definition, decided to double it. The problems this causes can be contextually related back to the uncanny valley, a phenomenon quite often referenced when discussing Robert Zemeckis’ motion-capture animation, and of course, that which was used to bring Andy Serkis back to life as Gollum in possibly this film’s best scene. The psychological hypothesis, mostly used to describe robotic beings, posits that as something comes closer to approaching the likeness of human beings, we become discomforted by it, considering the flaws become more noticeable in comparison to actual humanity. This can undoubtedly be applied to Jackson’s work with the The Hobbit, the realism of onscreen motion more similar to action occurring outside your bedroom window than on a silver screen. However, the failures of the The Hobbit‘s visual components are less entwined with the high frame rate than Jackson’s overall “look” for the film, which occasionally steers itself into video game territory. 48 fps, in effect, enhances specific aspects of the movie and discredits others. It takes a moment to get used to; immediately, you get the sense that you are watching a fantasy program on either PBS or BBC on your HD television at home, or as some critics have put it – watching a documentary about the making of The Hobbit.

That previous statement is scary. If Jackson’s intent is to wholeheartedly propel you into a fantasy world, how could you possibly enjoy the film if you consistently linger outside its limitations? 48 fps will be easier for some to adjust to than others, and your appreciation for the movie in this format will no doubt stem from how willing you are to accept it. For me, it didn’t take very long before I was fully returned to the realm of hobbits, dwarfs, wizards, elves, trolls, orcs, etc. Yes, the technology has a considerable amount of problems. In any film, camera movement simply makes the image look different. Whenever our minds detect motion, what we are looking at obviously doesn’t appear the same. With a high frame rate, panning or frantically-cut sequences create an odd bit of distortion. It’s hard to put your finger on, but you’ll recognize it when you see it. As for the basic principles of the uncanny valley, there are many things to consider. Based on my appreciation for Tolkien’s universe, it was easy for me to accept The Hobbit‘s overbearing visual construction as a new form of onscreen reality. But for those less willing, it will likely be more difficult. 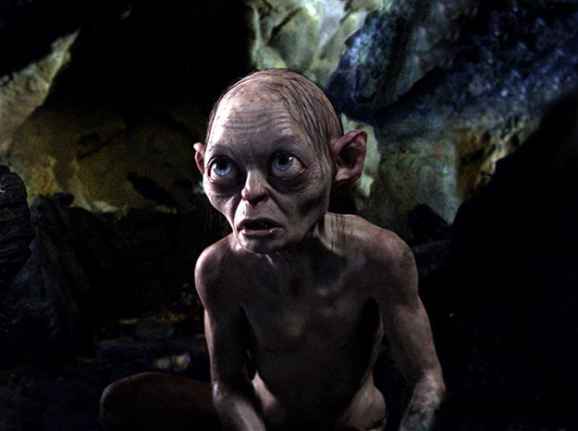 For example, when Thorin Oakenshield (Richard Armitage) gives his little speech about reclaiming the Lonely Mountain from Smaug the dragon, the cliche nature of the moment becomes more detectable. Because Thorin looks more like somebody we are actually looking at in real life, the speech rings false, simply because nobody we see in a given day behaves in that manner (or looks like a dwarf … well, maybe some do). The same goes for Martin Freeman’s occasional, nervous mannerisms as Bilbo, who actually gives a terrific, crowd-pleasing performance here. There is basically nothing wrong with his acting, but the way that it is presented by the technology makes it appear exactly that – like acting. When we watch a movie, we expect to see a character, not somebody playing a character. The result (and it truly pains me to say this word) is cheesy. This is an aspect of 48 fps that is particularly distracting, and begs for a new method of execution, whatever that may be, in future instances. Suspension of disbelief is therefore more difficult for the audience, and becomes an added factor that the filmmakers ask of viewers.

As previously stated, Jackson fills The Hobbit with so much CGI that with the exception of live actors, the movie often appears animated. As for what the filmmaker claimed 48 fps would do, he is absolutely correct. The imagery looks obscenely good, and the 3D is basically seamless. The case would be different if the film had been visualized more like Lord of the Rings, in which the ratio of animated effects to live action was more balanced. In that case, we would come back to the uncanny valley – the high frame rate would form two variations of onscreen reality, frequently jutting the audience in and out of the action. Here, Jackson does something that supports his interest in the technology, yet does him no favors as a storyteller. From black-and-white to color, and then from film to digital, cinematic history has held various transitions of what a moving image looks like. Most of the photographic elements of The Hobbit appear to be computerized, not only giving it a chaotically bombastic visual style, but also limiting the joys of what it could’ve done with traditional cinematography. Manipulations of on-set lighting, shadow, and tone-setting, visual elements created the old-fashioned way are substituted for Jackson’s insistence on showing you every visual intricacy; he simply wants you to see it all. It can therefore be argued that the cinematic sin here isn’t raising the frame rate, it’s what Jackson sacrifices to justify it. 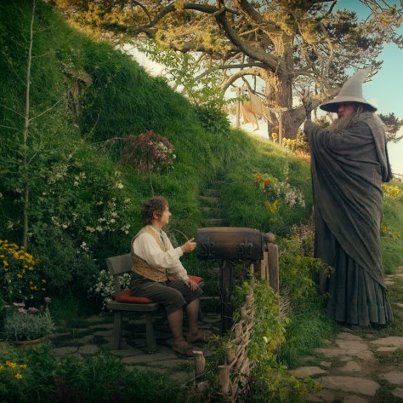 Martin Scorsese once said, “Cinema is a matter of what’s in the frame and what’s out”. Meanwhile, it was Jean-Luc Godard who said, “The cinema is truth, 24 times a second”. Jackson puts everything into every frame, and does it in 48. So I suppose we are left with the question, is The Hobbit: An Unexpected Journey “true” in its quest to become a staple development in a new breed of cinema? You can approach that inquiry anyway you like, but I will say this: the novelty value of seeing a film in 48 fps is very high, and worth viewing for that factor alone. As for the movie itself, Peter Jackson has done some debatable things, and if filmmakers became more astute to problems that high frame rates could cause, they would likely be able to avoid sacrificing other elements that makes the movie-going experience so special, and so accessible as an art form. His final product still manages to be one the coolest things you’ve seen in awhile, and is a film that will please fans, while hopefully reeling in new ones. At its core, the movie is a humorous, touching return to Middle Earth. Because for all of The Hobbit‘s light-hearted spectacle, it sure isn’t empty. Now that’s something.