The Magnificent Seven Review: A Clash with Kurosawa’s Classic 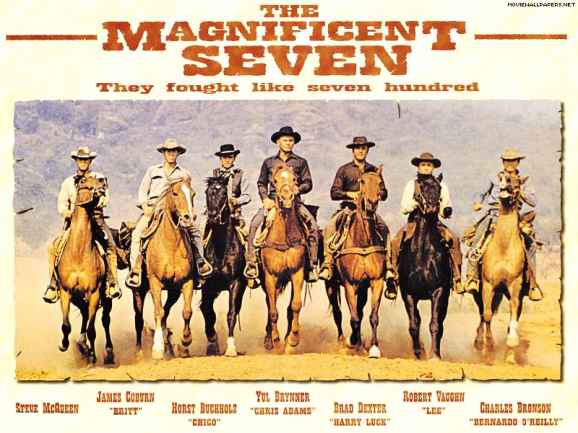 When judging films, I do my best to maintain an objective stance, but this isn’t always possible. The Magnificent Seven is a film were no matter how hard I try, my personal bias will come true strong. The film is a remake of Akira Kurosawa’s legendary Seven Samurai. Seven Samurai is widely considered one of the greatest films of all time and it’s also a personal favourite. This means that I couldn’t help but go into The Magnificent Seven with a high degree of skepticism and in all honesty, my expectations were fairly low. I always knew The Magnificent Seven would have to fit an uphill battle to really impress me and while I can say the film certainly has merit, I can’t say it’s in the same league as Seven Samurai.

The story starts with a village being terrorized by a group of bandits led by Calvera (Eli Wallach). The group have been extracting food and resources from the village for a long time. Fed up with their situation, the villagers decide to seek out protection by hiring a group of gunslingers to defend their humble town. They quickly find Chris and Vin (Yul Brenner and Steve McQueen), who decide they will take up arms and defend their village as well as leading others in the struggle. Chris and Vin recruit five others to the villager’s cause; Irish-Mexican Bernado (Charles Bronson), knife expert Britt (James Coburn), the inexperienced Chico (Horst Buchholz), an on-the-run killer Lee (Robert Vaughn), and Chris’ old friend Harry (Brad Dexter). The seven come to the village with the hopes of training the villagers and standing against the bandits.

Remakes usually follow one of two patterns; they either take the original source material and apply new ideas to it, or they are the same as the original in content with the attempt of just doing it better. The Magnificent Seven takes the latter approach, which is the film’s biggest misstep. The film brings very little to the table as far as original concepts go, and instead follows exactly what Seven Samurai does almost to a tee. What’s more, The Magnificent Seven is over an hour shorter than Seven Samurai and thus needs to condense the story, themes, and characters considerably and it shows. The themes from the original feel unnecessarily shoe-horned in and the characters don’t have enough time to develop unique personalities.

I wish The Magnificent Seven had taken the idea of seven individuals defending a village and done its own thing instead of being a complete re-enactment of Seven Samurai set in the West. Entire scenes are lifted from Kurosawa’s film and placed here. Details my be changed, but the overall intended effect is the same. All seven gunslingers are directly inspired by their samurai counter-parts. Why couldn’t the writers come up with seven unique gunslingers instead? To be fair, the character translations didn’t bother me too much with the exception of Chico (played by Horst Buchholz). Chico is a cross between two of the samurai from the Japanese classic. His age and relationship with a village girl is taken from Katsushiro (played by Isao Kimura), and his personality and backstory are taken from Kikuchiyo (played by Toshiro Mifune). For me, mixing these characters was a huge mistake. First of all, Kikuchiyo’s arrogant and boastful personality doesn’t work when applied to the young kid character because it makes the kid come off as unlikable. More importantly, the reasons Kikuchiyo work at all is because of the depth of character, which isn’t present in The Magnificent Seven, and the phenomenal performance from the great Toshrio Mifune, which Buchholz doesn’t come close to rivaling.


The film strays the most from the original in its third act, which is undeniably where the film is most successful. Because of the difference in weaponry between samurai and cowboys, the final battle plays out differently. There’s some interesting twists, and the final shootout is really exciting. There’s also some nice little character moments sprinkled throughout. While I’m on the topic of the film’s positive elements, kudos to Yul Brenner and Steve McQueen who bring a lot of charisma and are wholly believable as the leaders of the group. Charles Bronson also does some solid work his small part, and I loved Eli Wallach’s performance as Calvera. Elmer Bernstein’s score is very exciting and the iconic theme lives up to its reputation.

Posted on Dec 25, 2012 by
Daniel Simpson
Lover of film. Writer for The Artifice and PG Cooper's Movie Reviews.
Follow