The Man Who Shot Liberty Valance: Cultural Attitude of the Press 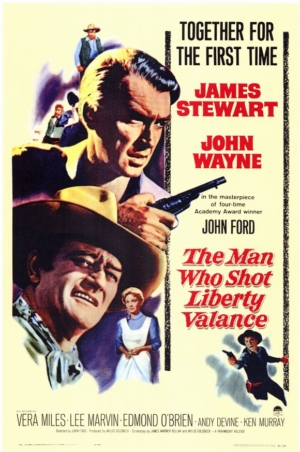 With drama, comes curiosity. However, what happens when what we know isn’t what really happened? The Man Who Shot Liberty Valance speaks to historical inaccuracies and the success that comes from it. Ransom Stoddard is traveling when his stagecoach is taken over by Liberty Valance, a villainous threat to the small town. After an altercation that leaves Ransom injured, Tom, a strong local, comes to his rescue. With the help of a waitress, Hallie, and the restaurant owners, Ransom recovers and wants revenge. His law-abiding ways are uncommon in the town. Yet Ransom and Valance are caught in a gunfight. Liberty Valance surprisingly dies and the town assumes Ransom was the man who shot him. After receiving notoriety for saving the town, Tom tells Ransom that it was him who pulled the trigger. Knowing he was inexperienced with violence, Tom fired to save Ransom. Years later, Tom dies and the myth of Senator Stoddard saving the town continues to be told. The town labels him a celebrity whose career is as important as his name. The Man Who Shot Liberty Valance represents what we label as news based on the interests of someone’s success.

What is most interesting about this film is the separation between contemporary and flashback. The contemporary scenes, like when Ransom and Hallie arrive in town, appear brightly lit and more progressive compared to the past. When the press becomes involved in Ransom’s business, it feels strange because the old town was very traditional in that your business wasn’t everyone’s business. Yet, in the present day, the reporter admits it’s his responsibility to uncover the reason Ransom and Hallie are in town. Regardless of Tom’s funeral being the reason for their visit, the news reporter is more concerned with knowing why they are there. Senator Ransom’s “celebrity status” trumps the intimacy of their visit. There seems to be a disconnect between genuine emotion and superficial vanity.

The film stylistically has Ransom and Hallie arriving and leaving the town by train. At first, we have no idea who they are or why they are there. When they arrive, they are welcomed by energetic and curious new journalists wanting to know about their visit. We assume, based on their surprise, the town rarely gets visitors with such importance. The train also appears to be a more modern form of transportation compared to when Ransom first approached the town, which helps remind the audience most of the film is a flashback. The young journalist overhears the Marshall welcome Ransom and Hallie into town. He asks Jason, a local train employee, who Ransom was and if he is important enough for a line in his column. Jason responds by saying “you can fill your newspaper with [Senator Stoddard and Hallie Stoddard], they are that important. The journalist runs to the phone and rings someone to tell the newspaper the Senator is in town.

While they don’t know why he’s in town, his physical attendance is enough to interest the reporters. What is meant to be a very solemn moment between those closest with Tom is interrupted. The editor introduces himself by first saying, “I don’t mean to intrude” when he is doing just that. It is in poor taste to want information about a senator’s arrival in a small town and worse when they demand it. In the past, Hallie was feeding people at the restaurant who weren’t paying out of the goodness of her heart. I do not believe if something tragic happened back then the town would be as heartless as the reporter is being. What is more interesting is why the reporter feels he is allowed the information at this specific moment. I think this is a testimony of how “celebrity” culture has become something of a necessity. Reporting on a personality, like a senator, is considered the news that needs to be reported on as soon as possible. This specific reporter says he has a “responsibility” to get the information on who Tom was. This responsibility in today’s culture is disguised as the large audience and commercial success companies receive from writing on someone’s personal life.

The commercial and capitalistic themes are shown in the last scene between Ransom and the news reporters. After he walks out of his friends’ funeral, he tells the entire story of Tom and his relationship with him. The reporter recites all of Ransom’s governmental accomplishments that grew from the lie of him saving the town. He then grabs the notes and rips them up, symbolizing how irrelevant the truth about Ransom is. “This is the West. When the legend becomes fact, print the legend”, says the reporter. This isn’t just about the West. It is about society and the media’s impact. If the lie is more interesting than the truth, it’s more beneficial to print the myth.

If released today, I believe the reporters would be less respectful towards Ransom’s accomplishments. They would want a scandal they could report and investigate. The Man Who Shot Liberty Valance was released in 1962 and celebrity culture obsession, I would argue, was still relatively premature. However, it did occur. Granted it was nothing like today which is why the response to the press is unique in the film. People joke about how reporters will do anything for a story. The film demonstrates how narcissistic and insensitive the press can be towards a human being and their story.

Posted on Feb 24, 2018 by
Emily
Studied film to be a director before realizing screenwriting was my outlet. MFA student at DePaul University. @EmilyKalash
Follow