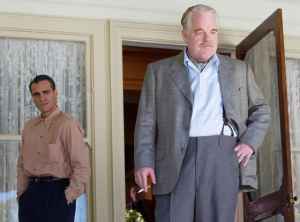 Of late, Paul Thomas Anderson’s films have become something of an event. Since the ballsy Boogie Nights and epic follow-up Magnolia, PTA has had every superlative under the sun thrown at him. It’s undeniable, the man is a special talent. He gets superb performances from his casts, he is a double-threat director/writer, and each of his films manages to maintain a mystical quality whilst never becoming too aloof. Ultimately, PTA movies are about people, and The Master (in spite of its Scientology-like allusions) does not stray from the path.

The plot is loose and serves its purpose. Navy man Freddie Quell (Joaquin Phoenix) returns home to find himself moving from job to job, losing himself in a haze of moonshine and self-destructive behaviour. After stumbling into a party on a boat, he is introduced to Lancaster Dodd (Philip Seymour Hoffman) – the charismatic and guarded leader of cult-like group The Cause. From there, Quell is subjected to various processes by Dodd, who adopts Freddie as his protege.

What follows is probably the most intriguing double act you’ll see in cinema this year, and maybe even beyond. The relationship between Freddie and Lancaster will provoke laughter, sadness and speculation long after the credits roll. This is largely thanks to PTA playing his cards close to his chest with the script, as well as the performances by the leads. Hoffman commands every scene he is in with an authoritative air that recalls the more oppressive performances of Orson Welles; whereas Phoenix has a face that can convey a flourish of conflicting emotion with ease, and as a result he eclipses even his Oscar-nominated turn in Walk the Line at the ’06 awards. This time around, based on the strength of their performances, they could be battling at this year’s ceremony.

Ironically, it was Hoffman who beat Phoenix to the little golden guy for his portrayal of Truman Capote in Capote, (but let’s be honest, Heath Ledger’s performance in Brokeback Mountain eclipsed both of them) and this year could see them face-off once again – their back-and-forth in The Master adding a further delicious irony to their potential Oscar face-off.  It’s only happened a dozen or so times before, so it isn’t unheard of for two actors to be vying for the Best Actor prize, but I have the feeling that this particular race will be tough to call. Again, their competition will come primarily from another gifted actor (PTA alum Daniel Day-Lewis for Lincoln), making this year too close to call. 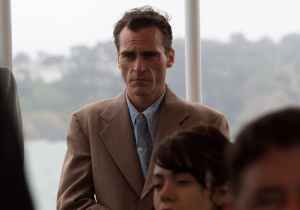 The primary reason that I feel there will be a close Best Actor race this year is that Joaquin Phoenix is outstanding here. This is the kind of performance that should push Phienix into the “elite” performer category; something that has always been within reach but has just eluded him due to some controversies. In fact, he has recently taken another shot at the industry (calling the Oscars “bullshit”). Despite tracking back on what he said, it still damages his chances. Whether there are awards on the way or not, this is still a career performance. At the drop of a hat, Phoenix turns Quell from a gibbering, drunken mess to vulnerable man-child. One minute he will be jovial and light, the next a raging hurricane (see the holding cell scene for a brilliant and animalistic expression of rage). Phoenix’s best quality, in acting terms, has always been his ability to layer emotion in facial expressions. The overlooked Two Lovers was a hint at the mysteries that his facial quirks could hold, and The Master is a showcase of just how gifted Phoenix truly is. The scene where Lancaster Dodd unveils his second book sees Phoenix at his most restrained, but also his most impressive. Make no mistake about it – this is one for the ages.

Which brings us to Freddie Quell’s yang. Philip Seymour Hoffman is probably one of the most dominating lead men working at the moment. Every leer and nuance filters through to the audience as pure Alpha-male posturing. Even when he plays the sad-sack (see the excellent Synecdoche, New York), he bursts into explosions of anger that hint at the “wounded animal” mentality that Hoffman portrays so well. Just when he seems to be calm, sedated or beaten, Hoffman strikes furiously – he does this as well as anyone else. When the normally serene Dodd is questioned on a change to his group’s methods, he shifts swiftly from a man open to rational thought and discussion to an uncoiling viper striking at his unsuspecting victim. The way in which he suddenly erupts is a trademark, and it makes for an unpredictable and dangerously charming turn.

Although there has been a lot of fervour surrounding the Scientology similarities, the film certainly does not suffer under the weight of such pertinent and delicate subject matter. As with There Will Be Blood, no outright accusations or criticisms are launched by PTA. He does not use his position to preach, but to show; the effects of love and war take up as much screen-time as the consequences of surrendering yourself to a “cult”. Tragically, there seems to be a quietly influential force at work here. That force is the enigmatic character of Peggy Dodd, who is played with restrained power by Amy Adams. Her scenes are few in number, but her influence is pivotal; so much so that I started to feel that Peggy pushed Lancaster to pursue The Cause, rather than it being Lancaster who is spearheading the movement.

It is here that the tragedy becomes apparent. No doubt Dodd is a very intelligent, and often brilliant, man. However, the focus upon his positive ideas takes a sinister slant in the context of The Cause. PTA’s work always has a distinct odour of allegory, and The Master is no different. Holding a light to the perversion of  Dodd’s ideas could be a swing at anything from Democracy through to religious fundamentalism. The beauty is in not knowing, and PTA always make sure that we can never truly know what he is getting at. This open-endedness serves the film well, as there is so much left open to interpretation. Along with Phoenix’s inherently unknowable performance, the events in the film are also difficult to pin an interpretation on to, with the final exchange between Dodd and Quell being particularly elusive. To this moment I still am not sure of the true nature of their relationship. Master and minion? Father and son? Mentor and protege? You can even make the case for there being a certain romantic attraction, but that could be a little lazy. 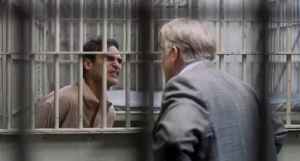 The fluid nature of their relationship makes intriguing food for thought. One scene depicts Quell returning from a short stay behind bars, and then leaping upon Dodd in a fashion similar to that of a dog and, creepily, his master. The playful streak doesn’t start and end with that scene, as it seems The Master is also one of PTA’s most playful films yet, with plenty of light humour breaking up what would have been an almost impenetrable aura of uncertainty. As much as I enjoy having things left to me to figure out by a film, it’s not for everyone. Sometimes the tone gets slightly muddled in the balancing act between the smoke and mirrors display and the human drama. That, however, is a very minor criticism – one that I don’t necessarily believe is a bad thing, but is a flaw nonetheless. In all, this is another instant classic from Paul Thomas Anderson, with a beauty, vision and guile to match his best work.

Posted on Dec 5, 2012 by
David Tatlow
You can call me Tatt. I like all kinds of films, as well as talking to/boring people about them at great length, so brace yourself.
Follow