The Newsroom and The Hour: Feminism in a Fictional Newsroom

With the news that The Newsroom has been picked up for a third season comes a wave of bemusement. A show that had more potential than a sack full of Jack’s magic beans, The Newsroom has repeatedly turned out episodes that make Studio 60 on the Sunset Strip look like a modern masterpiece. A lack of nuance and a failure to abide by the cardinal rule of “show, don’t tell” don’t help matters, but it is Sorkin’s writing of women that creates the series’ biggest problem. So, why a third season?

Any fan of The West Wing will have been exposed to some of Sorkin’s casual misogyny (see: the closing scene of The Crackpots and These Women), but his acclaimed White House drama was of such high calibre that those issues were overshadowed. The dialogue was razor-sharp, the political debates were forward-thinking and the characters were warm as a hot chocolate on a winter’s night. The quality of The West Wing was reason enough to get excited about The Newsroom. Added to this, real news stories being told in a fictional newsroom was a format that had recently been explored brilliantly on BBC series, The Hour. Set in the 1950s, The Hour offered two six-episode seasons, with the look of Mad Men and a cast as impressive as they come. 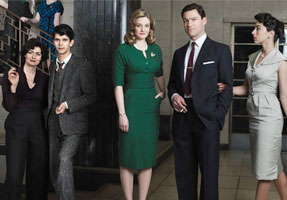 There were three central female characters in The Hour: Bel Rowley, Lix Storm and Marnie Madden. All three were complex, interesting and sympathetic characters. They were distinct from one another. The three women all got along but there was a particularly significant friendship between Bel and Lix, with Lix being a sounding board for Bel and a constant ally. Bel, the show’s main protagonist, was the show boss, facing the critical eye of male colleagues who were sceptical that a woman should be in her position. When one of the male characters questioned her ability to do the job in the opening episode, she deliciously responded, “Watch me.” After that, it was a matter of indeed watching as she demonstrated her capability and integrity in their newsroom as the producer for the little show that could. She earned the trust of her male colleagues, not without resistance, and she chased the significant stories, not without obstacles.

Bel’s Newsroom counterpart must surely be Mackenzie, executive producer for News Night, but more often seen flapping her arms around, not understanding email, and getting shrill over her past relationship with cantankerous Will McAvoy. She’s good at her job, though, because Jim says she is and Jim is a man so we trust Jim. In fact, Charlie also says she is. Will concurs. All the blokes in the house can agree that Mackenzie’s really great. So why is it that we are exposed to moronic levels of stupidity, without any substantial indication that what all these nice men have been saying is true? She spends far too much of her time whining at Will to forgive her for an affair, and yet confirming what a wonderful person Will is. It’s aggravating, and more so because remember when CJ Cregg was great at her job and we knew because she consistently proved it?

Added to Mackenzie’s flaws is the fact that she has experienced zero character growth since the show’s pilot, and it seems her arc is of the when-will-she-get-with-the-male-lead variety (as of the end of Season 2, she is yet to actually have a storyline of her own). Sorkin’s always struggled writing romantic relationships: Josh and Donna were left unresolved when he departed The West Wing (and probably better for it), Dana and Casey took a terrible turn in Sports Night‘s second season and Studio 60‘s Jordan and Danny bordered on harassment (a theme: CJ and Danny, Charlie and Zoey: “Stop pursuing me.” / “No.”). The Newsroom‘s pairings are frankly no different. Will and Mac are tedious; Jim and Maggie are also tedious and within a love triangle riddled with self-proclaimed Nice Guys™; Don and Sloan involve Don. The way the women are written within all of their relationships leaves them with almost no power. The dynamics are controlled by the men, with Will punishing Mackenzie and her accepting it, and Don consistently treating Maggie terribly. In fact, it’s one of the only consistent things about the show.

Don and Maggie’s relationship does not work at all, and that’s Maggie’s fault – or so, Sorkin would have us believe. “We break up, I apologise, everything’s fine,” Maggie says of their on-off relationship, with no one weighing in with the suggestion that perhaps four breakups in five months might not all be entirely her fault. On The Hour, meanwhile, we see Hector treat his wife Marnie with cool disdain, similar to Don’s treatment of Maggie. However, viewers are not made to sympathise with Hector. Development in the Hector and Marnie relationship leads to a power shift, where a previously powerless Marnie asserts more self-respect and self-attained authority than Maggie could muster if she bumped off the entire newsroom in their sleep. Hector’s display of respect and, eventually, love for Marnie is the writer’s plot device for softening a previously unlikeable Hector to the audience. Sorkin, though, seems to assert that Don is, by default, a Nice Guy™ – as, on one occasion, reinforced by fellow Nice Guy™ Jim: “He is a really good guy and I screwed him.” Over the course of their relationship, Don strung Maggie along despite explicitly saying he did not love her, set up Maggie’s roommate Lisa with Jim because he suspected something between Jim and Maggie, undermined Maggie’s self-confidence plenty, was as dramatically unconcerned about Maggie’s panic attacks during which “she thinks she’s going to die” as it is possible to be and dated other women in their brief “off-again” periods – with overlap. Jim, meanwhile, dated Maggie’s best friend Lisa for no reason other than to distract from his feelings for Maggie or to make Maggie jealous. Such nice guys.

The third major female character on The Newsroom is Sloan Sabbith. She is easily the most likeable, but once again is plagued with gender issues, the most disturbing of which is the scene where Mackenzie hires her. While Olivia Munn is stunning, I have no problem believing that her character could also be an incredibly knowledgeable economist. Sorkin clearly thinks differently though, and had Mackenzie clarify that, though there are in fact plenty of men more qualified for the position, “they’re not going to have [Sloan’s] legs.” As a general rule of thumb, women do not tend to talk to each other like that, and certainly not in a job interview, having only recently been introduced to each other.

For much of the first season, Mackenzie and Sloan are ostensibly friends. “Please come on our show so that straight men can sexually objectify you,” is an unconventional way to begin a friendship, but then female friendships have always been a struggle for Sorkin to get his head around. In the recent episode Election Day Part 1, a male character even told Sloan she needed to be less desperate for female friends. Wow, really? Before Sloan, it was Mackenzie who was all-too-keenly pursuing female friends (News Night 2.0). Before The Newsroom, it was Jordan on Studio 60. Why does the idea of an organic, stable female friendship seem to cause Aaron Sorkin’s brain to short-circuit? While Sorkin throws together character friendships whenever he requires a little camaraderie, The Hour provides consistent and complex friendships for its entire ensemble. The dynamics evolve and adapt with the storylines, as you would expect real people and real relationships to develop. This is particularly true of the female relationships, with a solid close friendship with Bel and Lix and a complicated, compelling dynamic between Marnie and Bel. Ultimately, despite Bel’s brief affair with Hector, the two characters maintain a deep respect for each other, recognising the shared obstacles they face as women.

While The Newsroom continues for another season, The Hour won’t be returning to screens, despite having more well-paced character development in a single episode than The Newsroom has had in its lifespan. Television is a cruel, dark place. Here’s hoping that a third season of The Newsroom might finally allow it to meet the standard it should have always been. It seems bizarre, though, that a series set in the 1950s should depict more powerful portrayals of women than that which is set in the present day. Watching Maggie, a graduate in her twenties, unable to recognise, firstly, that ‘LOL’ means “laugh out loud” and not “lots of love” and, secondly, that acronyms are wholly inappropriate on a sympathy card, it strikes me that Sorkin has no aspirations to create complex, sympathetic, believable female characters.

The landscape of television has changed significantly since Sorkin made his name at NBC. With the ubiquity of reality TV, there has never been more need for high quality, scripted television. A big part of that is creating female characters as diverse and complex as real women. In this respect, The Newsroom has a long way to go.

Posted on Sep 13, 2013 by
Jessica Eve Kennedy
English student with a habit of working West Wing references into any situation. Likes to write extensively about TV and feminism.
Follow