Charlie Chaplin was a prolific member of the film community. He was not only a creative and innovative director but an entertaining actor and inventive writer who was responsible for hit after hit during the silent era and beyond. But like most successful artists his love life and the scandals surrounding it put a stain on his personal legacy and became increasing fodder for gossip columnists and fans alike. During his life in the spotlight and four marriages, he was constantly followed by rumours that his preference for the company of young girls went beyond paternal instinct or mere friendship. It was this tendency that would cause Chaplin intense scandals with two out of his four wives being under 18 at the time of the marriages and with biographer Joyce Milton even claiming Chaplin was one inspiration for the character of Humbert Humbert in Vladimir Nabokov’s controversial book Lolita. However, although Chaplin’s marriages were mostly short and unamicable he was, in many cases, the driving force behind the career’s of each of his wives and produced exceptionable work with them. Below are short descriptions of each of the Mrs. Chaplin’s and their relationship with the film legend.

Chaplin was nearing 30 and a fully fledged movie star when he met his first wife Mildred Harris at a party in 1918. She was a youthful, carefree and beautiful actress but at 16 should have been off-limits. Eager to increase her career, Harris promoted a friendship with Chaplin which soon turned into a casual fling. They had been dating a few months when Harris announced she was pregnant but this was found to be a false alarm. However, the damage was still done and to reverse the burgeoning scandal, Chaplin impulsively married the young girl on October 23, 1918. Thankfully so, as it was found Harris – now Mrs. Chaplin – had become pregnant with his first child, a son, Norman Spencer Chaplin, who was born July 7, 1919 but sadly died three days later. It was this hardship that added to the problems of this hostile and overall unhappy couple. Although, Mildred was receiving more movie offers and better films contracts because of her connection to Chaplin, they argued over her future and lack of formal education. The couple privately split in mid 1919 and Mildred officially filed for divorce in 1920 pleading mental cruelty. Chaplin hit back accusing Mildred of several infidelities with one of her lovers, although not publicly named, was suspected of being none other than known bisexual, actress and party-girl Alla Nazimova. The couple was divorced in November 1920 with Harris receiving $100,000 and some property. She continued small acting and stage work until her death on July 20, 1944 from pneumonia.

Lita Gray, born Lillita McMurray, was Chaplin’s second and youngest wife. She claimed they first met when she was very young at a restaurant when her mother, desperate for her daughter to become a successful film actress, introduced the young girl to Chaplin, aged now 35. The liaison continued when the pair met again during the making of ‘The Kid’ in 1920 where Grey – at age 12 – has scored role as an angel. It is then Chaplin became interested in the beautiful girl and commissioned a portrait to be painted of her by a friend. However, a serious relationship between the pair only developed four years later during the filming of ‘The Gold Rush’ (1924) which Grey – who had now signed a contract to Chaplin and officially changed her name – had a small role. This sparked a romance, soured by some sudden news, Lita was pregnant. In ordinary circumstances, Chaplin, still grieving the loss of his first born, would have welcomed the news but with Grey, just barely 16, the birth could see the actor facing criminal charges. In order to prevent the scandal, he made another rash decision and married Grey, secretly, in Mexico on November 26, 1924. She gave birth soon after to Charles Chaplin Jr., born May 5, 1925 and to Sydney Chaplin on March 30, 1926. Grey’s career seemed, at the moment, to be over as her role in ‘The Gold Rush’ was dropped due to her pregnancy and other parts not forthcoming. By 1926, there unstable marriage had become even more disastrous and Grey demanded a divorce granted August 22, 1927. It was a bitter, public ordeal with rumours of affairs and sexual misconduct clouding Chaplin’s fame and reputation. In the end, Grey was awarded a massive $600,000 settlement and $100,000 for each child. After the scandal Grey became reclusive and was featured in only a few small films before her death of cancer in December 29, 1995.

Paulette Goddard, the oldest and most successful of Chaplin’s wives, was a divorcee and in her twenties when she met the actor/ director at a party in 1932. They formed an instance friendship which turned into a romantic relationship. After their meeting, Goddard landed a contract as ‘Goldwyn Girl’ by featuring in several early 30’s musicals, such as, ‘Roman Scandals’ (1933) and ‘Kid Millions’ (1934). Over this time it was reported that Goddard was now living at Chaplin’s Beverly Hills estate. Their relationship also moved into the creative realm with Chaplin giving Goddard the much sort after lead role in ‘Modern Times’ (1936) which cushioned her entry into film stardom. It was the after the release of the film that the pair reportedly got married in China but this was never proven. Chaplin and Goddard both argue the wedding was not an entirely legal marriage but that it still existed in the common law; however, no papers were found to corroborate this claim. The ‘marriage’ continued happily for the next four years until the couple’s last film together, the controversial, ‘The Great Dictator’ (1940). The relationship began to crumble after the release and they officially divorced in June 4, 1942. They remained distant friends until Chaplin’s death and Goddard continued making movies until her death in April 23, 1990 from emphysema. 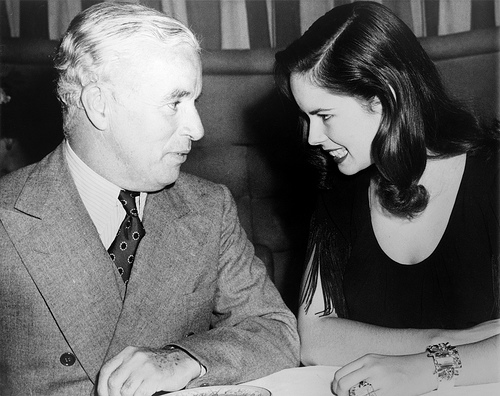 It would be fourth time lucky for Chaplin who, at age 54, appeared to find his soul-mate and contentment in eighteen-year-old Oona O’Neill. The couple met in late 1942 with the newly divorced Chaplin attempting to bolster his waning career. She was suggested by some of Chaplin’s associates for a part in his upcoming film, ‘Shadow and Substance’. Although, he though her too young to play the role, Chaplin signed her up and began giving her acting and speech lessons. A romance soon blossomed with Oona rather than Chaplin promoting the relationship. They married on June 16, 1943 in Santa Barbara, California and Oona soon abandoned her acting career for a family. Over their happy 34-year marriage they had eight children together, including actress Geraldine Chaplin, actor Michael Chaplin, circus performer Victoria Chaplin and composer and actor Christopher Chaplin. Oona outlived Chaplin and died on September 27, 1991 from pancreatic cancer.

What About the Others?

Outside his marriages, Chaplin has also been connected to several other more illustrious women and, in some ways, more problematic scandals. His first public girlfriend and, many said, the person Chaplin should have married was film actress and constant collaborator Edna Purviance. They appeared in 35 films together and may have had a more long lasting relationship if the beautiful Mildred Harris hadn’t captured Chaplin’s attention.

However, it would be with a little known aspiring actress Joan Barry that would cause Chaplin the most pain. They had a small affair in 1942 that ended when Barry began behaving irrationally and harassing the director. A short time after Barry gave birth and immediately sued Chaplin to financially support the child. Although, blood tests showed that Chaplin was not the biological father, the evidence was argued as inadmissible by the prosecution and he was ordered to support the baby.

All through his successful and groundbreaking career, Charlie Chaplin had been followed by several scandals, rumours and controversies. His was accused of being inappropriately attracted to young girls and fathering children by them, being falsely married to another and having many extra-marital affairs. No one could call Charlie boring, but thankfully, his immense and groundbreaking input into filmmaking has overtaking his personal life to shape the legacy Chaplin has today.