Why 3-D is here to stay, but not for a while

“We have to see Life of Pi in 3-D,” I said to my family upon its release over Thanksgiving. “I thought you hated 3-D,” my dad chimed in, which put me in a bit of a conundrum.

What exactly is my position on 3-D? This is a new technology that has been implemented and failed twice in the history of movies already, and the majority of the movies using it today do so for the price markup. There is currently nothing wrong with the ability to make a great film in two dimensions, and no film yet has come along and proved to the world that 3-D can reinvent the wheel.

And yet some remarkable movies have been made by some of the most brilliant directors working today. Avatar was a wonderful start, but since then the list has added Coraline, Hugo, Cave of Forgotten Dreams and this past week’s Life of Pi. These are films that told their stories in ways 2-D could not. Seeing James Cameron, Martin Scorsese, Ang Lee or Werner Herzog use 3-D gives a little faith that some people know what they’re doing with those gigantic rigs.

Right now, it’s not the technology that’s too young and immature, but the attitude toward it.

One of the more frustrating arguments in defense of 3-D is that all new film technologies were at one point considered gimmickry. Sound, color, widescreen and ironically the movies themselves were all once on the shit list. If only people weren’t so negative to these new ideas, we could have progress much sooner.

But all these things really were gimmicks at one point. They followed the same trajectory that 3-D is on now. Audiences were instantly wowed in their first uses, but then a blockbuster smash led Hollywood to overreact and make movies that used this technology just for the hell of it. The market was flooded with mediocre product designed to capitalize on a craze, and only years later did anyone figure out how to make a great movie out of it. 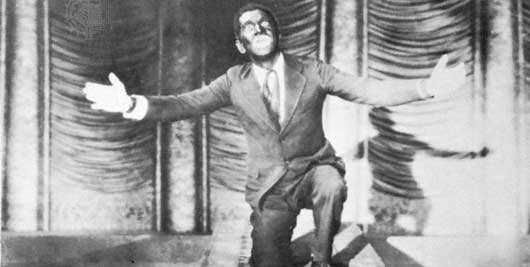 Take the evolution of talkies from silents. Sound on film really did reinvent the wheel. Al Jolson opened his mouth and announced, “Wait a minute, you ain’t heard nothing yet,” and things were never the same. Silents were out and talkies were in, save for a few Charlie Chaplin stragglers.

But that early period of talkies is really dismal. Musical after corny musical was churned out of Hollywood. They so populated the market that by 1933 when 42nd Street was nominated for Best Picture, the genre was box office poison. Shorts featuring Al Jolson and other stage stars were a good way of selling a celebrity to the country without that person actually having to make a tour through Nowheresville, USA. It was a blatant cash grab.

Even an early masterpiece like Fritz Lang’s M from 1931 was in essence a silent picture that used sound to punch up moments of suspense. Movie storytelling itself had to be adjusted to fit the technology. Taking a silent movie and adding sound was no longer enough. 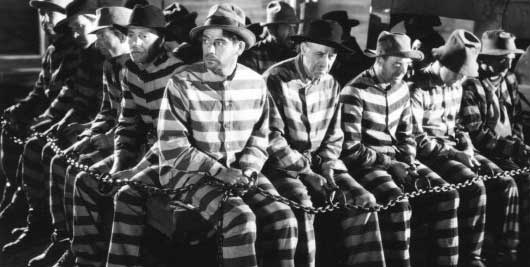 A good example is 1932’s I Am a Fugitive from a Chain Gang. There’s a riveting scene where the hero is on the run from prison guards and hunting dogs. When the image cuts to the dogs, we hear their barking loud and clear, but when it cuts back to the fugitive, the noise has lessened and the dogs appear farther away. When the man hides and the sounds almost disappear altogether, we know he’s safe. We attain a sense of suspense and spatiality based on the sounds, a trick that seems obvious today, but not so obvious in 1932.

The same is true of color. The early adapters of color are obvious classics like Gone With the Wind and The Wizard of Oz. But did you stop and wonder why there are only a handful of great color films for the next decade at least? Peter Bogdanovich has a great anecdote about the time when he was making The Last Picture Show. Orson Welles was living with him at the time, and Bogdanovich recalls saying they wanted to make this character drama and period piece in color. “You’ll never get it in color,” Welles barked. “Name me a great performance that’s been in color!”

Color was used for Westerns, travelogues and fantasy. It was never a serious format. Not until arguably the dawn of New Hollywood in 1967 was it realized that color could be used to look drab, bloody and shocking and not just pretty. Movies like Bonnie and Clyde, 2001: A Space Odyssey and The Godfather would’ve never worked as well if not for their new, innovate ways to use color.

This gets us back to 3-D. It’s unfortunate that Hollywood decided to call it 3-D, when really the current glasses are a completely different technology from the red-blue lenses of the ‘50s and ‘80s. More so than use 3-D as a way of pushing things out of the frame, current filmmakers who know what they’re doing have a way of drawing our eyes into it.

For Cameron, it was about creating a world where the camera could move about freely and make the environment feel limitless. For Scorsese, it was to make an homage to the way audiences once processed a train hurtling toward the camera. For Herzog, the cave paintings he found represented a form of proto-cinema with vitality and figurative movement that could only be shown through the vibrant and undulating cave walls.

It’s a beautiful film that for the most part would not be the same in 2-D. Yet so many movies released today in 3-D would be just the same. Movies not photographed in 3-D are digitally converted to mimic the effect, in fact making the image look more artificial. People seem to stand in front of the background like a cardboard cutout in a way the filmmaker never intended, and the only real difference is the extra cash you’re paying “for the technology.”

Thankfully, 2012 was not the record year for 3-D movies that 2011 was, which means that Hollywood is learning. It means that soon we’ll have more filmmakers who want to use 3-D for artistic purposes and not monetary ones. One film alone will not win critics or audiences over to the technology, but gradually it can become accepted. Hopefully this won’t eventually mean the end of 2-D films the way silents and black and white movies have disappeared, but in time, 3-D will be so agreed upon that we’ll have a new gimmicky technology to complain about.

Posted on Nov 29, 2012 by
BrianWelk
Contributing writer for The Artifice.
Follow