Wreck-It Ralph (2012) Review: Disney proves yet again they can do it without Pixar

Another enjoyable surprise of the year turns out to be Disney’s animation – Wreck-It Ralph. This year’s animated features have really picked up from the previous year and I can honestly say that I haven’t watched a bad one thus far.

The movie takes place in Litwack’s video game arcade. At night when the arcade is closed, the game characters frolick and travel in-between games; a concept which reminded of Night of The Museum and even Toy Story. We meet Ralph who is the villain in the game Fix-It Felix Jr. Ralph is tired of being the bad guy and outcast in his video gaming world. It becomes more evident one day when he is not invited to the anniversary of Fix-It Felix Jr. At the anniversary and at his support group, Ralph expresses his desire to switch sides so he can fit in with the other characters who are portrayed as “good” in the gaming world. Ralph then ventures into other games on a quest to find a medal to impress Felix and company. He meets an unexpected new friend in the Sugar Rush racing game and they form a bond. As the movie goes along, what was suppose to be just getting a medal, turns out to be a quest for Ralph to save his new friend and also the video arcade.

I’m not usually a big fan of John C. Reilly but he did pretty well with the voicing of the main character Ralph, as so did the rest of the cast. Wreck-It Ralph was better than I expected and had surprising depth. A clever, surprisingly good and heartfelt story. A villain who wants to turn good? That’s not something we are accustomed to in the movie world. Ralph and his new friend Vanellope (voiced by Sarah Silverman) are both loners in their individual gaming worlds and their bond was magical. I just love the twist which was revealed later in the story; it caught me off guard and really added to this film. 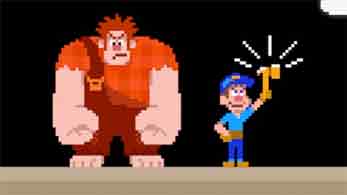 In this movie, we get a mix of both new games and vintage games which will not only appease to young children but to adults as well. One of the strengths of this film was its impressive sound mixing and editing. We get new and vintage sound effects making you feel all nostalgic. I adored the characters and what is also very admirable is how each stood in character when the arcade was closed and even outside of their own game. The animation is lovely, it captures each character and their worlds perfectly making you feel as if you are in the game itself. It was really fun seeing some of the characters moving in 8-bit motions, a characteristic of vintage games. The humor is commendable and consistent throughout the film. Disney proves to everyone that they can make solid animated films without the aid of Pixar.

Although the concept might have been influenced by other films, I honestly believe Wreck-It Ralph is the best animated feature of 2012 so far. Hilarious, great voice acting, fun characters and a clever story. You will see some of your favorite video game characters get shown, getting you all lost in nostalgia. Wreck-It Ralph pays homage to classic video games and it really worked.

Posted on Nov 26, 2012 by
ShawnaKayGreen
Lover of films, sports and anything positive. my movie blog is http://iaretheshawna.blogspot.com/
Follow

Is the World Ready for an LGBTQ Disney Princess (or Prince)?
Why Space Jam Worked
The “Actual” meaning of Encanto
The Appeal of the female characters in Arcane: League of Legends
The nature of Self in Centaurworld
Steven Universe and Fascism
Disney’s Live Action Remakes: Who are they for?