Body of Sedition: Yang Zhichao and Art that Hurts

Somewhat unsurprisingly, performances overflowing with human lubricants and rife with the gynaecologically invasive frequently drew the attention of the authorities and artists were fined, arrested and even served jail terms for their art. During one atypically conservative piece, Vienna Walk, in which Günter Brus, soaked in white paint with a vertical black stripe trailed down his body, walked through Vienna’s tourist centre, police intervention was almost immediate; Brus’ was stopped in the street and ordered to pay a fine. The encounter was documented by diligent photographer Ludwig Hoffenreich, and subsequently became an integral component of the piece. Social rebukes seem to have been, in part, what lent these actions their validity; if the artist caused an uproar their purpose had been fulfilled.

Following the official demise of Actionism at the beginning of the 70s, performers across the world, directly influenced by the transgressive exploits of the Austrian quartet, continued in the Actionist tradition. Equally fixated on the body, artists such as Cosey Fanni Tutti and Genesis P-Orridge of COUM Transmissions (who would later found Throbbing Gristle) performed in the U.K., carrying out D.I.Y. surgery in a puddle of their own blood, vomit, urine and semen. Likewise Bob Flanagan in the States indulged in “supermasochistic” performances, hammering nails through his penis while reciting jokes to the audience. The subject of repeated denigration, these pieces had social critics labelling their perpetrators the “wreckers of Western civilisation”.

What may seem to many a list of lunacies committed under the guise of “art” by those who would serve society better locked in padded cells and kept from sharp objects, continue to have a bearing on contemporary artists. Various embodiments of extreme performance are still enacted in the 21st century amid a virtual landscape in which the psyche has become disembodied in a whirlwind of binary. Yet, in what appears an ironic twist, some of the most provocative of these pieces have occurred in one of the most domineering countries; a country whose state apparatus heavily restricts aspects of the everyday that we in the Western world take for granted: China. Here, a new strain of corporeally focussed artists have emerged and taken up the baton of extreme performance and excruciating visuals, leaving the “morally incorruptible” quarters of society feeling a little green at the edges. So shocking is this new wave of Chinese art that British institution Waldemar Januszczak flew to China and filmed the documentary Beijing Swings, investigating the contentious movement.

Many of the uninitiated have probably come into contact with one of China’s most extreme artists without knowing it. Photographs of Eating People, Zhu Yu’s infamous piece in which he cooked and ate a human foetus, circulated the internet in the early 00s causing much controversy (Yu has since admitted that the foetus was not real). This critique, illuminating the coin’s edge between law and morality and bearing an uncanny resemblance to Jonathan Swift’s A Modest Proposal, was quickly repressed by The Ministry of Culture who found the piece unfit for cultural consumption and consequently banned exhibitions involving corpses and overt violence and sexuality. The censorship that many branches of Chinese society are subject to have given Chinese art the volume of a fighter jet – those with the most to rebel against, rebel most forcefully.

That these acts even take place is a testament to the dedication and creativity of several individuals in the face of overwhelming domestic opposition. Determined to bring attention to the social sanctions forced upon the Chinese people by any means necessary, they undergo acts that could potentially have them put away. One such individual who raises his voice for the hard-of-hearing is Yang Zhichao, a multi-disciplinary artist who is somewhat renowned for his agonizingly painful performance pieces. Through ingenious metaphors he comments on the contingent nature of our relationship with the world around us, or more specifically, the relationship between our body and the world around us. And, whilst relatively unknown by Western audiences, he has caused quite a stir in his homeland. 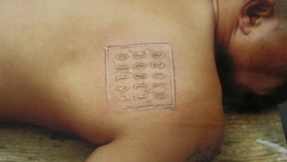 Having moved from a rural province to the bustling city of Beijing in 1998, Yang became acutely aware of globalisation and the power it exerts over the body. Whereas in rural Gansu the body is a tool required to labour and toil, in Beijing the body is a hard-drive embellished with the products of industry. It is amongst the homogenous mass of this neon bathed city that Yang’s ideas took form, fuelled by the effects of an age of information and the attempts of technology and state to control the body.

From among his diverse array of works, four key pieces by Zhichao illustrate this fascinating concept to its fullest. Iron, performed in 2000, saw Zhichao branded like livestock with his personal identification number. Consecutive photos recording the procedure show Yang lying face down on a bench, next, with a heavy brand pressed against his right shoulder and finally, the result – fifteen raw digits seared into his skin. The photographs give no impression of the artist’s pain but we, the audience, imbue it with our own, with recollections from childhood of accidentally touching a hot iron or saucepan. We empathise with him in his stoic feat because we all know the pain of being burnt. Beyond the blistered flesh however, this act evokes not only notions of ownership but also efforts of the state to categorise and monitor their subjects. The branding becomes analogous with reducing a person to a number, just one number in an ever growing list to be scrolled through.

More invasive than Iron, Hide a 2004 piece by Zhichao, elaborates on the already established theme by incorporating the idea of the body as being more compatible with technology than with nature in the globalised era. Taking its cues from the surgical world, where people have parts of their body replaced or repaired with electronics and medical scaffolding, Yang, with the help of fellow artist and surgeon Ai Weiwei, sat in Beijing’s art district for a public operation – the insertion of an unspecified metal object into his leg. The object which remains unidentified, in keeping with the title of the piece, resides to this day in the artist’s leg; his body healed and assimilated the trinket, retaining its ability to function as normal. 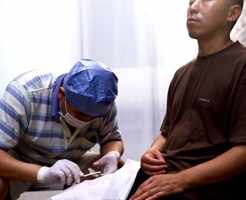 Zhichao embarked on two pieces that were intimately connected to Hide. They followed the same premise of implanting foreign objects into the body but this time the objects signified the natural, not technological. In both cases Yang had material surgically planted into his flesh: firstly during Planting Grass (2000), in which creek grass was sewn into his shoulder, and secondly during Earth (2004), where the titular substance was imbedded in the roof of his stomach. Each time Zhichao endured the procedures without anesthetic. The pieces proved a triumphant vindication of his idea that the body is more comfortable with technology than nature – an unpleasant infection developed as his body rejected both grass and earth leaving him badly scarred in each area. It seems that through these opposing pieces (Hide and Planting Grass/Earth) Yang hoped to convey to us the violence of nature in the face of oppression and the inertia of technology, and that as we become governed more by technological processes we adopt this inertia, no longer fighting to preserve our independence.

Rather than being accessible only to the artistic elite, Zhichao’s performances tap into more universal issues. His portrayals of pain echo what we can all relate to on varying levels; they show us one universal constant as our day-to-day lives are saturated by technology, and offer forewarning of our decline into the realm of post-humanism. By observing his anguish we become spectators to an evolution of the body increasingly complicated by technological advancement. He raises us to a daunting viewpoint from which we’re forced to confront the effects our environment has upon our biology.

Regardless of what each individual gains from his extraordinary performances, one thing remains true: Yang Zhichao represents the pinnacle of a flourishing art scene that continues to transform the way we look at human anatomy.

Posted on Jul 3, 2013 by
Josh Willcocks
Cultural graduate who enjoys peering into the often shied-away-from, back alleys of art, film and literature.
Follow