You’re Next Review: It’s Home Invasion, Jim, But Not As We Know it

You’re Next is the latest feature from up-and-coming director Adam Wingard, whose back catalogue includes everything from horrific gore-fests (Home Sick, A Horrible Way to Die) to relationship pieces (Autoerotic, for which he shares a directorial credit with indie audience-splitter Joe Swanberg, who appears in You’re Next). It’s great to see a director who refuses to limit himself to one genre, but on the evidence of his latest effort, Mr Wingard would do well to stick to horror…

You’re Next sees a somewhat dysfunctional (aren’t they always?) family come together for a reunion. Four siblings – each with a lover in tow – gradually arrive at the impressive home of their well-off parents. They trade banalities, barbed questions and thinly veiled unpleasantries…up until the point that their evening is rudely interrupted by a bolt from the blue. Literally. What ensues is one of the most twisty, playful and downright enjoyable horror films in recent memory.

The quality of the film owes a lot to its various components, which together make up a final piece greater than its indie credentials. The little-known cast members do a solid job with some tricky material and dialogue that plays fast-and-loose with dark humour and familial tensions. Joe Swanberg in particular continues his strong run of playing guys you kind of want to punch in the face, and Sharni Vinson is an exciting bag of tricks in her role as one of the better halves caught up in petty family politics. As the film moves along, Vinson transforms into one of the most engaging characters in horror movie history. To say much more would veer dangerously close to spoiler territory, but you’ll certainly be rooting for the hero come the final showdown. 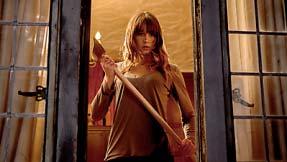 That’s not to say that the “good guys” have all the fun. The masked intruders certainly provide ample terror for the most part, with a typically lurching and ghost-like presence common to most home invasion movies. The camera work and direction manage to amplify their presence, with masks seemingly disembodied in darkness and dull thuds of axes embedded into skulls ensuring that their violence is not glamorised, but truly felt. It’s not until an attempted breach of the house that the film takes a somewhat surprising, albeit hugely entertaining, turn. When the first drop of villainous blood is spilled, You’re Next becomes a guessing-game of a picture. Characters reveal new flaws and skills, the humour goes from dark to pitch-black, and the violence is presented gleefully. Realistic execution-style deaths are slowly replaced by use of kitchen appliances that are certainly not detailed in their manuals, as well as some cringe-worthy ineptitude with improvised methods of murder. In fact, as the final act comes hurtling at you, you may just find yourself thinking that You’re Next owes as much to the influence Home Alone as it does to any horror film.

That’s not to say that there isn’t more to You’re Next than typical slasher/home invasion tropes. You always feel that one character in particular will survive this ordeal (even that expectation is playfully teased in the final confrontation dialogue), but you’re always left wondering who will actually survive. Being wounded early on does not mean that the enemy will not get you again, bereavement for a partner is not milked for tragedy and motives are not always clear – just when you think the twist has been revealed, the rug is pulled from under you again. The hero has a background that makes for a fair fight with the masked men, and the music creeps from percussive horror to Big Trouble in Little China style helpings of thudding synthesisers. Even the “bad guys” are used effectively to create the kind of personality and pathos you wouldn’t typically get in two-dimensional enemies like those in more generic horror pictures.

You’re Next isn’t afraid of crossing genre lines. Writer Simon Barrett, in another successful horror team-up with Adam Wingard after the twisty A Horrible Way to Die, deftly brings in elements of thriller and Festen-lite drama to great effect. There may come a point when the film indulges in its own malleability a little too excitedly, but excess is not necessarily a bad thing in a film that is not shy about its intentions. From its provocative title to its willingness to take typical genre aspects (woods, large empty house etc) through the ringer, You’re Next is a genuinely involving thrill-ride. It’s the most fun I can remember having at the cinema for some time, and a shot-in-the-arm to a genre that was stingingly, and lovingly, satirised by The Cabin in the Woods. Think Funny Games turned up to eleven, without Michael Haneke’s wagging his finger at you – or the rewind button – and you’ve got You’re Next… kind of. Thoroughly recommended.

Posted on Sep 9, 2013 by
David Tatlow
You can call me Tatt. I like all kinds of films, as well as talking to/boring people about them at great length, so brace yourself.
Follow