4 Dystopian Novels That Should Be Made Into Movies

A dystopian novel tells the story of a future society that in someway is undesirable or unpleasant. These futures can include totalitarian government, post-apocalyptic cities and technological advancement with some of the most famous titles being Nineteen Eighty-Four, Brave New World and Fahrenheit 451. In the past dystopia has proved a big hit with cinema with successful titles such as The Matrix, Minority Report, and A.I. Artificial Intelligence. This year is no exception with The Hunger Games: Catching Fire and an adaptation of Stephenie Meyer’s The Host. The allure of dystopia is perhaps its ability to use fictional societies to show us what is unpleasant or undesirable in our own society. What captures the reader is usually the protagonist’s fight against the oppressive system. Following on from the successes of the films above are 4 dystopian novels that I think should be made into movies. 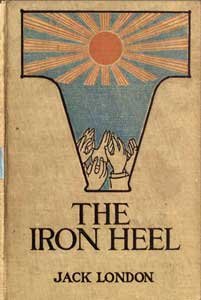 Although better known for Call of the Wild and White Fang, Jack London also wrote a dystopian novel. The Iron Heel, published in 1908 and set around the same time, follows the rise of an oligarchic tyranny in the United States of America. The novel is in the form of a manuscript, written by Avis Everhard, that is discovered in the future by Anthony Meredith (whose own fictional footnotes are included). The story follows the rise of the Oligarchy and the beginning of the revolution, headed by Avis’ husband Ernest. Instead of technological change, this novel highlights a social and political change.

The Iron Heel would make a brilliant film for several reasons. There are great speeches delivered by Ernest that detail the eventual rise of the Oligarch (or Iron Heel) and on Capitalism. The right actor would be able to show the strength, courage and belief of Ernest, highlighting his heroic nature and eventual martyrdom. Viewers would be able to form a strong connection with him, as he is the hero of the novel. The manuscript is not without action including battle scenes between the forces of the Oligarchy and the Revolution. This could be particularly appealing to American audiences, as not only is the novel set in North America, but it also highlights socialist ideas that may be intriguing to a country without a political left. 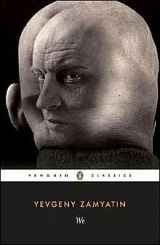 This novel was Nineteen Eighty-Four before Nineteen Eighty-Four. It details ‘The One State’, a future society that is made entirely of glass and where life is organised to maximise efficiency with every waking hour planned out for each citizen. The story follows D-503 (everyone is assigned a ‘name’ like this) builder of ‘The Integral’ space ship, as he writes his diary in the run up to it’s launch. An encounter and subsequent romance with I-330 introduces the protagonist to a world of alcohol, cigarettes and rebellion.

We would make an excellent film adaptation as the world is richly and logically set out by the author. From the Green Wall that surrounds the state to the great stadium containing the execution device the Bell Jar. There is a lot of great scenery that could be imagined with the aid of CGI. Furthermore the story is gripping, with the diary format giving a lot of scope for a director to expand the prose into engaging scenes. The protagonist, D-503, has great depth shown by his struggle with rebellion and who he really is. I will not spoil it, but the ending is somewhat of a cliff hanger which gives the novel, and potential film, a well-rounded feel. 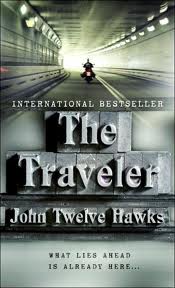 The Traveller  is the first book in the Fourth Realm Trilogy, which is set slightly in the future of our own society. All power is in the hands of The Brethren who believe in stability and total control. They have created a web of surveillance incorporating the ideas of Utilitarianism and Jeremy Bentham’s Panopticon (a prison that requires only one guard). The story follows two main characters: Gabriel Corrigan (a Traveller) and Maya (a Harlequin). Travellers have been hunted to near extinction by The Brethren as they are able to leave their bodies and travel to different realms (there are six in total). The Harlequins are a group charged with identifying and guarding Travellers, as it is believed they can improve society via their visits to the other realms. The plot is fast paced and follows Gabriel and Maya as they discover how to travel to the other realms and try to evade The Brethren.

The rights for The Traveller have been bought by Warner Bros. and for good reason. It’s fast paced with tremendous amounts of action. The trilogy travels all over the globe encountering interesting characters in very detailed locations. It would be very simple to translate the novel to the big screen. And with two other books written sequels would be available. As well as the action, the novel deals with themes that can particularly resonate with viewers. Concepts such as freedom, surveillance, and morality all feature heavily in the book. Edward Snowden’s revelation of a surveillance network covering North America and Europe only serves to give the fictional society more legitimacy. The Traveller brings the concept of Big Brother into the modern age. Out of all the novels in this list, The Traveller would translate the best to the big screen and is therefore more likely to come to fruition than the others. 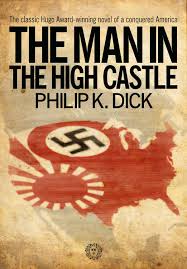 The Man in the High Castle answers possibly the biggest ‘what if’ question of recent history: What if the Allies had lost the war? The novel creates an entirely new history from the assassination of Franklin Delano Roosevelt to the death of Hitler and subsequent leadership power struggle. The USA is split up between the two victors of the war with Japan controlling the East Coast, and Germany controlling the West Coast. The novel follows numerous characters: Nobusuke Tagomi (a Japanese Trade Missioner), Frank Frink (a craftsmen), and his ex-wife Julianna Frink (a judo instructor). The plot deals mainly with the alternate universe, highlighting the power struggle between Japan and Germany and within the Third Reich itself. Many of the characters in the book admit to reading the novel ‘The Grasshopper Lies Heavy’ which postulates how the Allies may have won the war. The novel within the novel is an interesting concept which indirectly binds many of the characters together.

This is the dystopian novel that I would most wish to see on the big screen. The alternate universe created by Dick is intriguing and most importantly completely believable. For example the characters are subjected to the news of Hitlers death, with all rushing to find out who the new Chancellor is. A list of contenders is run through with accompanying mini-histories for each. If done correctly it has the potential for a visually stunning and engaging piece of cinema. However, that being said the plot itself is rather slow moving, with nowhere near as much action as other novels in this list. The reason that I have put this novel first is that it hasn’t been done before. Although there are hundreds of films about World War Two, there are none similar to this. The 2012 film Iron Sky is the closest contender, but in all honesty the idea behind that film is slightly absurd. If done in the right way, a film could faithfully represent the legitimacy of the novel and provide a credible alternate history film.

Think I’ve missed some obvious choices out? Or have suggestions for who could play certain roles?

Posted on Jul 17, 2013 by
Thomas Currington
Politics graduate from the University of Sheffield. My main interests are literature, TV and film. Favourites: Kerouac & Fitzgerald, The West Wing, American Graffiti
Follow