For over 60 years, the Edinburgh International Film Festival has delighted residents and visitors to the Scottish capital. It has a rich and illustrious history, having showcased classic films such Taxi Driver, Blade Runner and E.T. the Extra Terrestrial. With the 67th festival now underway across numerous locations in the city here is a rundown of some of the films that have made a strong early impression.

The latest from prolific Icelandic director Baltasar Kormakur is a chilling tale of man being pushed to the very edge of their physical limitations. Based on the true story of an Icelandic fisherman who survives for nine hours in the near freezing conditions of the Atlantic Ocean when his trawler is capsized several miles from shore. A box-office smash in its native land, it was deservedly submitted as Iceland’s entry for Best Foreign Language Film at this years Academy Awards.

Kormakur’s pacing is superb, spending as much time in the set-up and aftermath as he does in the water for the film’s action centre-piece. It makes a refreshing change from films like 127 Hours and Buried, in which the protagonist spends the entire film in life-threatening danger, making them feel like feature-length endurance tests. This allows for more time to get to know the characters, making the scenes of peril all the more intense. Olafur Darri Olafsson gets the bulk of the screentime as the unfortunate fisherman Gulli, and he brings an innocent charm to the role, portraying him as a gentle giant and a wholly loveable presence. His character is frozen, battered, and bruised by the unforgiving conditions, the waves chewing him up and spitting him on the rocks, in what must have been an unbelievably unpleasant shoot. His sacrifice is our gain however, as the emotional impact and icy intensity makes The Deep a triumph of the human spirit, and a must see experience.

The Battle of the Sexes

James Erskine’s documentary about the infamous battle of the sexes tennis match between female icon Billy Jean King and former great Bobby Riggs. Erskine strikes gold with a subject matter filmed with glitz, glamour and a whole host of larger than life characters. A mix of voice-overs, interviews, rare archive footage and reconstruction all capture the excitement and political up-rest of the period, as well as enhancing the story. At its best, the film exposes the shocking attitudes towards women by a large section of the American population, with vox-pox interviews proving to be the most condemning. Hard to believe this was the common consensus just a few short decades ago.

Like Asif Kapidia’s Formula 1 chronicle, Senna, the documentary succeeds at the hardest of tasks; taking a subject you may know or care little about, and turning it into a film that is captivating, thought-provoking and entertaining. Before the final showdown between King and Riggs, it becomes obvious their battle is not just for bragging rights on the tennis court, nor to establish the physical dominance of a particular gender, but has wider implications for gender equality in the 1960’s and 70’s with relation to job opportunities and equal pay. There is a rich layer of humour running throughout, Riggs being likened to the Big Bad Wolf is particularly effective imagery, yet it never overpowers what is a moving and important story of social reform.

The latest from American Independent filmmaker Noah Baumbach is an awkward coming of age comedy. Featuring his mumblecore muse Gretna Gerwig in the titular role, the film focuses on the breakdown in her relationship with best friend Sophie (Mickey Sumner). Formerly two oddball soulmates standing together in a world they do not understand, now torn apart by a man. The threadbare narrative sees Frances bounce around New York and beyond, trying to find a place to live, while attempting to find herself in the process.

In her own world, Frances is unique free-spirit who charms her friends with her graceful clumsiness and quirky humour. When she ventures out of her comfort zone into the real world it becomes obvious that she is ill-equipped to adapt to more conventional social settings. Here the comedy turns excruciating. In less skilled hands the off-beat world Frances lives in with her hipster friends could have been overwhelmingly obnoxious and nauseating. However Baumbach judges his characters perfectly, being written and performed with enough accessibility to be likeable and believable. It is Gerwig who is the standout, proving spot-on in her delivery of deadpan lines, as well as a master of physical comedy.

A Story of Children and Film

During a visit from his niece and nephew, Irish filmmaker and occasional film critic Mark Cousins sets up his camera and records the youngsters playing in his flat. To the untrained eye what transpires between them would seem little more than the typical interactions between brother and sister. To Cousins’, a deftly observational director, he sees the play session as a reflection of how children have been portrayed onscreen since the advent of cinema.

His camera manages to capture the children demonstrating what it means to be young; the shyness, the temper tantrums, the desire to show-off, to tell their own stories, and on occasions, to destroy something. He relates these stories to that of children in cinema, using rich and diverse examples from around the world, from industries as varied as America and Iran, Mexico and Albania. His research is in depth, his observations poignant. It makes for an excellent companion piece to his early opus, The Story of Film: An Odyssey, making Cousins one of the most astute and thoughtful filmmakers working today.

One of Pixar’s most beloved duos, Mike and Sulley, return for a prequel set during their wild days at the distinguished Monsters University. Previous sequels from the famous studio have proved to be hit and miss; despite the phenomenon of the Toy Story trilogy, Cars 2 proved to be a disaster, by far their worst film to date. They can rest safe in the knowledge that the followed up to Monsters Inc. is certainly markably better than the Cars sequel, if perhaps not getting close to the quality of the second and third adventures of Woody and Buzz. 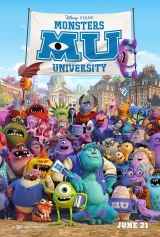 Monsters University‘s biggest strength is remembering what was at the heart of the first film. A world populated by wonderfully creative oddities with personalities to match their bizarre appearances. The location shift does inspire almost all the madcap situations from classical college-based comedies, making the plots seem rather cliched, but with so many loveable character it is impossible to judge them too severely. Predictable perhaps, but at its best it is a warmly funny and charming film to rival some of Pixar’s finest efforts.