Throughout news and current affairs history, scores of commendable anchormen and women have risked everything to deliver the news. This thought-and-discussion-provoking profession, despite the enviable perks, breeds small-screen heroes. During prime time, we look to these people for guidance. At least, someone should’ve told that to San-Diego-born-and-bred newscaster Ron Burgundy. Despite having a voice that can make a wolverine purr, the bumbling idiot needs guidance in and out of the newsroom. In Anchorman 2: The Legend Continues, Burgundy, despite his baffling offensiveness and stupidity, elevates this sprawling comedy. Cracking comedic hijinks, fun performances, and tender moments develop this enlightening and absurd sequel into something memorable.

With Anchorman 2 being released nine years after the original, Burgundy’s legend is growing to gargantuan proportions. Turning into a bafflingly influential cult classic, the original is an infinitely quotable and hilarious farce. With lines like “where’d you get those clothes from? At the toilet store?” and “I’m in a glass case of emotion!” gleefully uttered across the world, the original became a comedic and cultural touchstone. As electric icebreakers, references to comedic actor Will Ferrell’s movies are now commonplace aspects of the human psyche.

The sequel, despite not hitting the same glorious notes, is still this year’s funniest and most bizarre big-budget comedy. The sequel picks up almost where the original left off. With Burgundy (Ferrell) and his partner/co-anchor Veronica Corningstone (Christina Applegate) leading the weekend news at WBC in New York, they are called into legendary newscaster Mack Harken(Harrison Ford)’s office. With Burgundy fired and Corningstone promoted to lead week-night anchor, Burgundy embarrassingly ends their sizzling relationship. 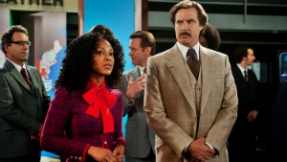 Like with recent sci-fi comedy The World’s End, Anchorman 2 had to overcome soaring hype and exceedingly high expectations. The original, latching onto Ferrell’s post-Saturday Night Live glow, was a sleeper hit thanks to overwhelming DVD sales and word of mouth. This highly anticipated sequel relies heavily on a bizarre cultural affection for marketing ploys. With its phenomenal PR campaign, Anchorman 2 benefits from its actors’ dedication. With Ferrell donning the character’s maroon blazer and thick moustache on newscasts and talks shows around the globe, Burgundy’s ubiquity almost tested our patience. However, the final product stands alone as an engaging, stupefying, and touching comedy.

Unlike most big-budget comedy sequels (Hangover Parts 2 and 3), Anchorman 2 forms its own identity whilst ably calling back to the original. Like the other Ferrell/man-child comedies, the story follows a standard structure whilst aiming to elevate itself above its predecessor. With each rendition of this rise-and-fall-and-rise plot-line, Ferrell holds tightly onto his comedic talents and gimmicks. Sporting enviable careers, fame, fortune, and guile, his characters’ journeys paint Ferrell in an intriguing light. Commenting on Ferrell’s own success, these movies serve a specific purpose for a particular demographic. Like Talladega Nights, Semi-Pro, Blades of Glory, and Step Brothers, the man-child comedy formula serves the wacky humour and characters effectively. Unfortunately, Anchorman 2‘s sub-plots are shoved awkwardly in between one another. These hit-and-miss story-lines become increasingly one dimensional and tiresome. Sadly, Brick’s relationship with a similarly dimwitted secretary, Chani (Kristen Wiig), becomes a one note banjo. 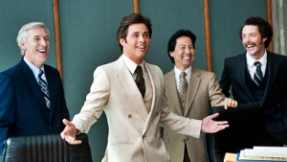 However, the movie’s emotional moments bring charm and wit to this otherwise formulaic affair. The familial conflict, aided by son Walter (Judah Nelson) and Corningstone’s new boyfriend Gary (Greg Kinnear), is a hysterical and cognitive part. This father-son plot-strand tests Burgundy’s moral compass. Of course, thanks to worthy director Adam McKay, the humour is Anchorman 2‘s greatest asset. Despite lacking the original’s spontaneity and thrills, the zany jokes and one-liners become lodged in the consciousness. Like the other Frat Pack comedies, the improv vs. scripted comedy hijinks ascend in laughs and absurdity. With each twist and turn, the narrative throws in more wacky characters, anachronisms, and obstacles. Each scene, chock-a-block with references, offensive jokes, and visual gags, ascends in quality up until the confusing denouement. There’s even a clever and ridiculous single edit.

Beyond this, the movie deliberates on several appropriate messages. With CNN’s unique and swanky newsroom set-up, the movie touches on Fox News and CNN’s stranglehold over journalism and pop culture. The tug-of-war between ratings and integrity provides many clever gags. Poking fun at the commercialisation of modern broadcast news, this comedy becomes a electrifying and intelligible satire. Despite the Rupert Murdoch-esque head honchos, action-packed broadcasts, and racial equality in the workplace, GNN’s cycle is shaken up by four immature, early morning newscasters.

However, the craziness doesn’t stop there. McKay douses the lens in 70s and 80s iconography and stylistic flourishes. Documenting the bizarre and outlandish cultural, social, and generational transitions, Anchorman 2‘s mis-en-scene livens up this kooky and enlightening comedy. Anchorman 2 gleefully embraces such iconic elements as gargantuan hairstyles, coloured suits, broadly plastered office spaces, and swanky apartments. Without alluding too often to the over-the-top political and social agenda, the visuals splash yet another layer of silliness onto this already insane sequel. Despite the bold and brash visuals, the movie doesn’t stick to its assigned timeline. References to Ghostbusters, Bloodsport, and Planet of the Apes break the Anchorman universe’s every rule. However, going outside the box is considerably inventive and surprising for a modern comedy. The comedic hijinks, despite their hit-and-miss nature, comprise of enjoyable call-backs and inventive original jokes.

Unfortunately, the original’s memorable moments are copied and pasted into this slightly inferior sequel. The Jazz flute, condom cabinet, sex scenes, and reactions (“By the hymen of Olivia Newton-John!”) contain a been-there-done-that vibe. However, the sequel’s zippiest lines serve their purpose. Despite the conventional plot and overbearing physical gags, the characters and performances are worth the admission cost. The four misogynistic, jingoistic lead characters kick Anchorman 2 into overdrive. Burgundy is, arguably, Ferrell’s greatest character. This pathetic and obnoxious man-child, despite his overbearing weaknesses, is an intriguing and determined hero. Receiving several wake-up calls, Burgundy’s bigotry is tested by the surrounding gargantuan forces.

With engaging performances, fun comedic moments, surprises aplenty, and an action-packed climax, Anchorman 2 stands proud as a successful sequel and the year’s best comedy. Ferrell, despite relying on marketing ploys and formulaic plots, relishes this offensive and larger-than-life character. Hopefully, another sequel will remove the unnecessary call-backs and develop an intelligent narrative.