Are Fossils the New Art? Analyzing the Lords of the Land Gallery 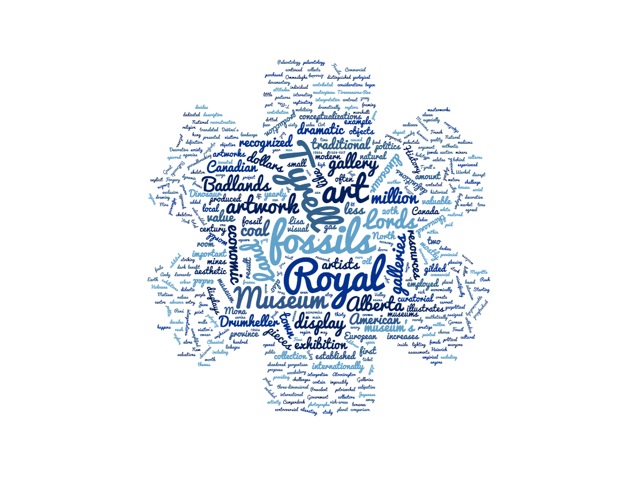 French art collectors Mr. And Mrs. Ommeslaghe distinguished between artwork and decorative objects in an interview included in the German documentary Beltracchi: The Art of Forgery (2014). They exemplified their definition of artwork with the pieces by Andy Warhol, René Magritte, and Heinrich Campendonk that hung behind them in the sitting room. Decorative objects, they agreed, were less valuable, even less authentic; the photographs in her dressing room for example, or the Japanese cloisonné vases under the Matisse drawing. Their description illustrates how the empirical worth assigned to artworks in the international market (translated in the dollar amount payed by the last owner) is the result of a series of subjective interpretations.

These individual assessments are often influenced by geopolitical values. Prevalent patriarchal attitudes in 20th century western society, for example, contributed to the traditional exclusion of female visual artists from important North American and European exhibition venues. Museums, galleries and auction houses choose what to display based on considerations that often have little to do with the perceived quality of an artwork. Government agencies fund exhibitions that can advance, or at least not challenge, their own political and economic objectives. Commercial galleries shy away from artists who explore controversial themes such race, politics, sex and religion, for fear of alienating patrons. The result is an orthodox art world, where everyone who is anyone collects the same artists (mostly men, mostly European and North American), while excluding entire geographical regions, mediums and cultures from having their own cultural production recognized as art. So what happens when the Royal Tyrell Museum in Drumheller, the only museum dedicated to paleontology in Canada, decides to display fossils as artworks in one of its galleries? How does their explicit comparison of fossils to internationally recognized masterworks disrupt traditional conceptualizations and valuations of art?

Paleontology is the study of life on planet Earth before the Holocene, a geological epoch that began approximately eleven thousand years ago. Fossil rich-areas, like the Canadian Badlands in the province of Alberta, are also rich in fossil fuels such as coal, natural gas, and oil. During the first two decades of the 20th century, the Badlands, and especially the town of Drumheller, experienced an economic surge spurred by the sale of fossils to internationally recognized museums. The National History Museum in London, and the American Museum of Natural History in New York, both purchased dinosaur fossils from Alberta during this Great Canadian Dinosaur Rush. Fossils continued to be at the centre of the social, politic and economic activity of the area when the rush ended. Starting in the 1930s, Drumheller alone produced over two million tons of coal yearly, and employed more than 2000 miners in the Badlands coal mines. This bonanza ended in the 1950s, when oil and natural gas were produced for the first time in Leduc, another Alberta town, which caused the coal production to decline until only abandoned mines and towns dotted the striking Dinosaur Valley landscape.

The Royal Tyrell Museum opened its doors to the public in 1985. The province of Alberta invested thirty million dollars in the project, the equivalent of sixty million dollars today, with the objective of economically mobilizing the historical fossil resources of the region. Four hundred thousand people from all over the world visit the Royal Tyrell every year; if all visitors paid the same amount I did in June 2016, the museum’s yearly ticket sales total more than 8 million dollars. But that is only an added benefit. The Royal Tyrell’s main contribution to the provincial economy is increasing the value of local resources through the value-added economics of research and display. Lords of the Land, a small gallery within the gargantuan 4,000 square meters of exhibition space at the Royal Tyrell Museum, illustrates this dynamic through their curatorial framing of dinosaur fossils as artwork.

Classical music salutes the visitor’s entry into Lords of the Land. The walls are painted in a stark dark grey colour, providing a point of contrast to the dramatic lighting and the gilded frames that contain dinosaur fossils in impossibly stylized postures. This small gallery displays some of the rarest and most scientifically important pieces in the museum’s collection, including a three-dimensional, full reconstruction of a Tyranosaurus-Rex. The way these pieces are exhibited however, is the really interesting part. These crown jewels of the Royal Tyrell are presented to the audience as visual art masterpieces by employing the aesthetic signifiers of the modern museum. The holotype of Atrociraptor marshalli is displayed inside an ornate gilded frame, and the skeletons of raptors are placed atop high white pedestals, dramatically lit. The interpretive signs emphasize aesthetic vocabulary: elegant, captivating, dramatic.

Lords of the Land is the only gallery within the Royal Tyrell that proposes this interpretation of fossils as art; the rest of the museum’s displays utilize a less dramatic, more didactic approach to exhibition. This gallery not only increases the value of local economic resources like fossils, but also challenges current definitions of art. Its curatorial argument – namely, that a restored T-Rex skeleton is as valuable, rare and aesthetically pleasing, as Leonardo DaVinci’s Mona Lisa (1503-1517) – increases the prestige of the Royal Tyrell and the value of its collection. The linkages established in Lords of the Land between traditional conceptualizations of artwork, fossils and the politics of display are groundbreaking in Canada. Galleries like Lords of the Land outline contested definitions of art that modern commercial galleries and established museums rarely address. Walking out of the dimly lit gallery I imagined my own living room, decorated with white lace-like skulls instead of oils on canvas. It looked beautiful, and it made me wonder if one day, Mr. And Mrs. Ommeslaghe would trade in their Campendonk for a Velociraptor.

Women, Culture and Politics: Buffy’s Critical Bite
The Mystery Behind The Influence of Instagram And The Popular Culture Industry?
The Fashion of the Met Gala: Why Are We So Obsessed?
The Influence of Social Media Marketing on Artists
Are radio edits a necessary evil or detrimental to artistic integrity?
Has destigmatizing suicide gone too far?
The Portrayal of Catfishing Within Popular Media