Since the birth of cinema, propagandists have hidden behind the mask of producers, realising the potential of film as a brainwashing tool. Insidiously, ideological seeds are planted in these films and watered by visual aesthetics, in order to germinate in the minds of the citizens. Motion pictures are utilised to teach the masses, how they should feel about the international conflicts that their country finds itself in. The beginning of the 20th Century marked a revolution in the medium propaganda was transferred through. The ancient Propaganda of scratched graffiti on walls, had undergone a major technological improvement. Therefore, when the First World War broke out, politicians saw the potential of using film to guise their patriotic motives.

Selling “The Bond” of American Citizens 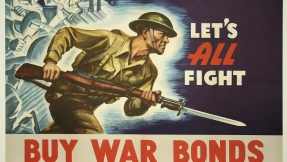 At the outbreak of World War I, motion pictures were becoming a favourite Westernized past-time. Cinema-goers became the first guinea-pig brains to test propagandist media. The American government saw the potential of immuring its citizens in boxed cinematic rooms, to push their ideologies and values. Ergo, anti-German sentiments pervaded many of their films, such as “To Hell with the Kaiser” and “Wolves of Kultur.” Rage flared through America, as Germany was pigeon-holed as ‘the enemy’ against the democratic ideals of the US. Ultimately, cinema was a persuasive tool to rally people to fight and support the war effort.

One blatant example of clear propagandist motives is evident in “The Bond” by Charlie Chaplin. The war effort was exceedingly expensive and costing the government a fortune. The concept of Liberty Bonds was conceived to encourage citizens to buy a share in the country’s freedom. A clear advertisement for these bonds was hidden under the guise of Chaplin’s ‘short film.’ It depicts several sketches along the theme of bonds, from friendship to marriage to the most important, Liberty Bonds. At the end, Chaplin is seen to be buying bonds from Uncle Sam, whom gives the money to a worker who manufactures the guns for a soldier. A montage of patriotic scenes wins the audience over to the monetary cause. This wasn’t movie-making but marketing. 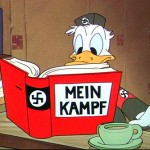 Even the innocent Disney could not stay pure from propaganda, amidst WWII. Donald Duck joined the war campaign in WWII, during the animated film: “Der Fuhrer’s Face” (1942). Indeed, imagine Donald Duck in a Nazi uniform, saluting the Heil Hitler. Today, it can be seen as a mighty paradox, with the symbol of the greatest evil and child entertainment, morphed into a marching duck—Disney and the devil. He makes a parody of the enemy, gives people a good laugh and bolsters patriotism. At the end, the ‘lucky duck’ wakes up in his bed, realising that the trauma he has experienced within the film (the everyday occurrences Germans could sympathise with) was just a nightmare.

Disney refuses to let the public see these films in modern times, with their strong anti-German sentiments. However, the well-known child brand cannot deny the fact that during this war, they dumped their usual princesses and princes, for propagandists. Once again, Hollywood joined the war effort. 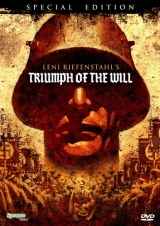 However, we cannot point the finger of blame only at Hollywood, as cinemas around the world have opened their ticket boxes to the propaganda phenomenon—none more so than Nazi Germany. Film played an indispensable role in the nationalised brainwashing of its citizens. In fact, the bad connotations that cling to the concept of “propaganda” can largely be blamed on Nazi’s pervasiveness through it. This is explicit, in “Triumph of the Will” (1935), which venerates the Nazi dynasty above all else, with a montage of exulting clips of Hitler and his mass support. Through film angles, he was set up as a temporal god and Germans were persuaded towards an idolised perception of him. This should not even be considered a film, but an indoctrinated advertisement.

You may be thinking: this was ages ago. Haven’t we evolved from these Neanderthal-minded attempts at coercing the public towards a particular opinion. However, even though cinema goers have swapped their cravats for connies these days, we are still at risk of military-persuasive cinema. This became evident to me, when I recently watched Lone Survivor and saw its persuasive power to recruit my date, to its ideological side.

Surviving through the Lone Survivor 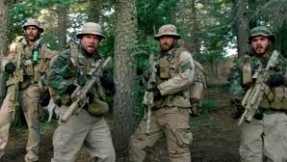 Unfortunately this militarisation of Hollywood still continues today, especially in the recent release of The “Lone Survivor.” Directed by Peter Berg, it is based on a real-life Navy SEAL mission that went bad in Afghanistan in 2005. Although not explicit naked propaganda, this movie is still barely covered by unpartisan clothes, as it deals with its war deaths with racial bias.

Berg makes American soldiers’ deaths sanctimonious, while simply eradicating Afghani lives with detachment. The local soldiers are killed as faceless men—with no back story or personality. They are mere flies to swat in bloody demises for the visual appeal of the audience. However, each slow death of the American soldiers is dealt with slow-motion footage and humane camera angles. Indeed, almost five minutes of the film is taken up with the valiant death of comrade, LT Murphy with his last wheezing gasps. It rekindles anger of this sacrilege of such noble heroes. Honestly, you might be hoodwinked into seeing a halo of light illuminating these soldiers’ bleeding scalps. They are the heroes of war that audiences cannot help but want to emulate.

Once again, this apparent “unbiased film” imbues patriotism in its watching crowds, in the hope to validate the honourable work of the infantry. The credit should be screaming: “Join the Army and become a Super Hero.”

The Other Side of the Argument

As I said, propaganda movies were utilised to teach the masses on how they should feel about the international conflicts that their country finds itself in. However, that means that film can also be used as a medium against war.

Therefore, unpopular mêlées were not promoted through the movies of their time, but rather ridiculed. In the 1930s, a new type of cinema emerged from the ashes of World War I’s aftermath. Leading films of this new cinematic age, were “Quiet on the Western Front” by Lewis Milestone (1930) and “Wooden Crosses” by Raymond Bernard (1932). These movies showed World War I in a very bloodthirsty, unglorified manner that even today manage to be very powerful in pervading anti-war sentiment.

Also, this anti-war cinema was evident in the 60s and 70s again, when patriotism was warped into contempt for U.S. soldiers and the vitriolic attitude of the nation was soaked through the time’s movies. The Vietnam War was the longest and most disliked war that America ever fought. Thus, producers pervaded anti-war sentiments within their films for the first time, rather than promoting patriotism. This revealed a shift in propagandist film, in which for the first time, cinema-goers were not bubbling with nationalist pride when they left the theatres. This was explicit in the 1978 movie, “Boys in Company C.” It observes the dehumanizing effects the Vietnam War had on recruits, as a U.S. marine travels for his brutal boot camp training to the bloody street fighting in Hue. The public were cursing the war as they took their empty buckets of popcorn from the cinema.

Whether it is to ratify or glorify the current war, cinema has always played an imperative role in persuading masses’ minds on how they should feel about current conflicts. Ultimately, the movie screen has been fighting its own persuasive war for almost a century. Its bullets in the shape of palm-sized admission tickets.