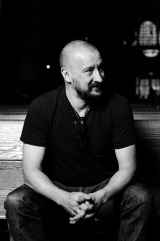 He is the brains behind one of the most recognizable melodies of our time, the only person Darren Aronofksy trusts to compose a score and one of the few original composers left in Hollywood at the moment. Fact is, Clint Mansell, once lead singer of the British band Pop Will Eat Itself, is a man to keep an eye on in the future.

Listing soundtracks like Aguirre, Eraserhead, Risky Business and Betty Blue as inspiration, Mansell is influenced by very different, but mainly older sources. In his own work, the progressive composer is most known for blending orchestral elements with modern, electronic sounds, creating scores that stand out among the common Hollywood piano cliché and completely electronic soundtracks. In an interview with The Quietus, he states that he doesn’t listen to new soundtracks very often „because by and large they’re not that interesting.“ However, he admits loving the recent Prisoners soundtrack by Jóhann Jóhannsson, which he regards as being „outside the norm of accepted film music“. Without doubt, Mansell has a liking for the unorthodox, the inventive and ground-breaking. Perhaps this is what attracted a young Darren Aronofsky and made him offer a long-haired Mansell the job as a composer for his first feature-length film, Pi.

Two years later, Aronofsky’s second film Requiem for a Dream released to raving reviews, and again, Mansell had composed the score. The centerpiece of the soundtrack, “Lux Æterna“, spread like a virus through the world of entertainment. It has been featured in countless movie trailers, tv shows and was remixed for The Lord of the Rings: The Two Towers. Mansell has since become a prolific film composer, his most successful music mainly coming from collaborations with Aronofsky. However, in the last few years, he has been able work his way up further and further with compositions for small yet successful independent films like Moon, Stoker and Filth. It’s time to look back at this up-and-coming star composer and his most impressive tracks.

After the break-up of Pop Will Eat Itself, Mansell moved to New York to compose a solo album – a project that was never realized. The band had been rather successful and in an interview with Empire Online, Mansell says that suddenly being comparatively broke sucked. However, he meets Aronofsky and the rest is history. While Pi didn’t have the biggest impact neither as a film nor as a soundtrack, Requiem for a Dream was a game-changer. Aside from the afore-mentioned centerpiece, the soundtrack evokes a bleak, disconcerting atmosphere that works perfectly within the nihilistic film. Aronofsky went on to recruit Mansell for every other of his projects, most of them gaining accolades for both the director and the composer.

In 2006, Mansell pocketed his first, and so far only, Golden Globe nomination for The Fountain. The soundtrack was very well received among both critics and audience. It has a more mysterious and light feel to it than Requiem for a Dream but shares the ominous undertone of the former success. 2008’s The Wrestler had a less successful soundtrack, however it became a favorite among fans online. Again, it’s a rather silent and ominous score with many small outbursts of electronic guitars and similar.

With Black Swan, both the filmmaker and the composer reached a new high 2010. The re-interpretation of Tchaikovsky’s original Swan Lake composition that was transformed into haunting tracks like “Perfection” and “A Swan Song” appealed to wide audiences and gained Mansell award recognition, such as a Grammy nomination. The latest Aronofsky-Mansell collaboration is this year’s Noah, a film that split audiences like no other Aronofsky film before. The biblical epic is scored by the expectedly hypnotizing tunes of violins and computer produced sounds, a soundtrack that has yet to prove itself come award season.

With Aronofsky usually taking 2-4 year-long breaks between his films, it is yet unknown what his next project is going to be. Still, it is safe to assume that Mansell will be on board once again, and produce something magical.

A composer can’t live on one paycheck every couple of years, so Mansell has worked on many films in between his projects with Aronofsky. After composing for many small productions that didn’t receive recognition among wider audiences, Mansell signed up to compose for Duncan Jones’s Moon in 2009. The film was celebrated as one of the finest sci-fi films of the decade and received instant cult status – and the soundtrack wasn’t overlooked either. Mansell himself enjoyed the film a lot and as he explained to CLASH, thought it was easy to write the score, since he liked the script. Living in L.A. he thinks that „getting a idea of the characters isolation in the film and the theme of feeling alone was pretty easy“. After all, Mansell describes his location as “Floating in space” in his Twitter account (@iamclintmansell).

Indeed, Moon‘s trance-esque soundtrack set it apart from previous sci-fi milestones like 2001: A Space Odyssey and may have served as an inspiration for the later space drama Gravity. Fast-forward to 2013, when the latter film was released, and Clint Mansell is hired for another two independent films that will go on to gain a decent amount of viewers. Firstly, the British black comedy Filth. Spiced with a longer list of existing pop and jazz tracks, the soundtrack features some very unusual, original tracks by Mansell, such as the catchy opening theme “Winter Wonderland”, the sexy, tango-esque “The Games” or the full-on scary “Reeperbahn Madness”.

The second film that gained Mansell recognition in 2013 is Park Chan-Wook’s Hollywood début Stoker. The stylized drama gained a decent following for itself even though it couldn’t completely impress critics. Since the characters and the story are very odd and skew, the music mirrors this as well, resulting in a hypnotizing, eerie work that sounds like Alice in Wonderland gone bad.

Even though his music or the films for which he composed it didn’t always get acclaimed, a look or rather listen into Mansell’s earlier compositions shows that he’s had it in him for years. Shortly after the success of Requiem for a Dream, the musician signed up for the horror film The Hole starring a young Keira Knightley. The soundtrack bears many similarities to the Aronofsky film with tracks starting slow and peaking in an unsettling sequence dominated by violins, and a steady, electronic beat.

A year later, in 2002, Mansell composed the score of the Angelina Jolie and Ethan Hawke crime thriller Murder by Numbers. The soundtrack is just as twisted and sexy as the movie, although both have been more or less neglected by viewers since its release. It’s still better known than the 2003 indie thriller 11:14 though, a critic’s darling at the time and long forgotten by now. One of Mansell’s louder and more electronic scores, it’s a pulsating mess that’s interesting to listen to even without watching the movie.

In 2005, the composer stepped outside his comfort zone with the big scaled action-adventure-comedy Sahara starring Matthew McConnaughey before his serious days. Despite good box-office numbers, the film flopped due to its high budget. The soundtrack is different from anything Mansell ever did before or after, following the common Hollywood Blockbuster formula more than his other soundtracks. Still, it’s more inventive and mysterious than most other adventure movie soundtracks, exploring the opportunities that the oriental setting provides with tracks like “Mosque” and subtly adding a few electronic elements here and there. Mansell composed another action-oriented score for 2006’s Smokin‘ Aces, a film that was generally bad received. Disregarding this, the film’s score is one of Mansell’s most hyped works among fans. It’s more electric than his earlier work and works well for adrenaline-packed action scenes.  A surprising addition to Mansell’s  oeuvre is the 2010 indie drama Last Night. A quiet and simple character piece, the film is wonderfully scored by a list of pop songs that were not composed for the soundtrack and some subtle piano tracks as imagined by Mansell.

With this mixture of critically acclaimed, inventive and original soundtracks under his name, there is no question that the future is bound to hold many more scores penned by Clint Mansell. So far, the only project he has officially signed is The Imitation Game, a 1950’s biopic on British cryptographer Alan Turing set to release November 2014. The film will be directed by Norwegian director Morten Tyldum, known for Headhunters and distributed by the Weinstein Company. Alan Turing will be played by rising star Benedict Cumberbatch, co-starring Keira Knightley and Matthew Goode. Since its completion in 2011, the script has been highly sought-after in Hollywood and names like Leonardo DiCaprio have previously been attached to the project. It seems like this may be Clint Mansell’s first opportunity to get his name out among the most respected people working in the film industry, and who knows, perhaps this time he will succeed in going all the way to the Academy Awards. At any rate, The Imitation Game looks like a promising project.

Clint Mansell has proved his talent and skill in various productions over the last decade and showed that he’s a versatile composer who is not afraid to try something new now and then. While his success with recent independent films and collaborations with Darren Aronofsky is notable, he deserves to be challenged with a truly big chance that may help him get accepted as one of the finest film composers of our time. Hopefully, The Imitation Game is that chance.

Posted on Jun 7, 2014 by
Mette Marie Kowalski
19. Traveler, culture addict and aspiring Uptown Girl. Suffers from Peter Pan syndrome. Does her best to improve level of geekiness and explore every corner of the universe.
Edited by Jordan, Misagh.
Follow