While reading Deadpool #1, a huge smile was on my face for the entire 20 pages. Marvel made a genius move by hiring two comedians, Brian Posehn and Gerry Duggan, to take on perhaps their most hilarious character. They seemed to stick by that old saying “if it ain’t broke, don’t fix it.” Posehn and Duggan aren’t here to reinvent the character or put their own personal stamp on him. They simply want to give us the Deadpool we all know and love, and give him an all new adventure for us to enjoy. I believe the greatest accomplishment of this issue is that it also serves as a tremendous introduction to people who aren’t familiar with Deadpool, but also gives his fans something to really enjoy. 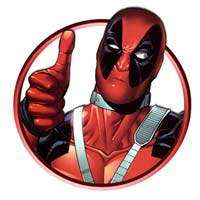 For anyone reading this that have no idea who Deadpool is, I suppose a tiny introduction is in order before I get into the meat of the review. Deadpool (Wade Wilson) is essentially a mercenary and anti-hero who is extremely mentally unstable. His primary ability is an accelerated healing factor, which allows him to regenerate any destroyed tissue at super-human rates and making him immune to diseases. Sounds very similar to another Marvel character doesn’t it? Like Wolverine, Wade Wilson also participated in the Weapon X program but there was an unexpected side effect. The procedure also accelerated the cancerous tumors housed in Wilson’s body, causing them to spread across it throughout. This brand spanking new healing factor caused the cancer to accelerate, resulting in massive scar tissue and giving him a severely disfigured appearance. The healing factor also bolstered an underlining mental condition. He was withdrawn and disturbed, even as a kid. The healing factor just exacerbated his insanity, causing him to constantly have conversations with himself and have no regrets when it came to killing. Probably the most fun thing about Deadpool is the meta aspect of the character. He’s completely self aware that he’s in a comic book, and engages the reader numerous times in the stories by breaking the fourth wall. This facet makes the character very attractive (not his appearance) to comic readers.

Well now that you and Deadpool are best pals, let’s get into Deadpool #1. Posehn and Duggan’s greatest contribution to this story is allying Deadpool with S.H.I.E.L.D. The idea is that there are jobs S.H.I.E.L.D. or even The Avengers shouldn’t take on, especially if they’re too strange or have political ramifications. This is where our zombie President’s story comes in. A rogue S.H.I.E.L.D. agent, who is disappointed in the the current condition of the United States, takes it upon himself to resurrect deceased Presidents in hope that they can repair the country’s fractured infrastructure. As Captain America comes to stop the man, Harry S. Truman rises from his grave. Since Truman is exhibiting supernatural abilities and incredible anger, Captain America has no choice but to decapitate the former President with his shield. Obviously this makes the headlines and S.H.I.E.L.D. believes this isn’t PR that they need. Agent Preston is given the task of fixing this mess, and this is where Deadpool comes into the picture. He’s basically hired by Preston to take on the job to eliminate the zombie Presidents. I believe she puts it best by telling Deadpool, “You’re not the hero we want, you’re the scumbag we need.” I believe that best sums up the situation at hand.

The story line is a great way of reintroducing Deadpool to readers, and it really sets up some fantastic comedic situations. Everything that there is to love about Deadpool is still there. His snappy one liners, lust for violence, lack of urgency, grotesque physical appearance, and charming personality are all at play. The healing factor I discussed earlier is also definitely put to good use in this issue. He’s practically falling apart when we’re introduced to him. While the issue is indeed funny and feels like Deadpool, there were definitely some things I missed. The full range of his insanity was not displayed well, for example he really didn’t engage his conscience or even multiple consciences. Also, the meta aspect was practically nonexistent. These are minor gripes, but I’m sure Posehn and Duggan will bring that part of the character out more as they and new readers get used to him. They seem to be playing it safe at the moment, but that’s fine for now.

The real star of this issue though is artist Tony Moore. Better known for his work on The Walking Dead, Moore brings his amazing art to Deadpool. His somewhat cartoony style really fits the character well, and he really does a good job at nailing facial expressions, especially when characters are reacting to Deadpool himself, which happens a lot. He also displays the gross parts that come with the character incredibly well, really depicting the grotesque look of Deadpool in grand fashion. That should really come with relative ease with working on The Walking Dead and he knocks it out of the park.

So is Deadpool #1 a success? I sure think so. It mostly gives fans of the character what they want, and should give new readers enough to want to come back. Posehn and Duggan may have played it a bit safe, but I think they will really let loose once they’re more comfortable. The combination of staying true to the character, a fantastic setup, humor throughout, and effective art work make this relaunch worth checking out. Also, make sure to check out the letter from Deadpool to the reader at the end of the issue. It’ll make you smile!

Posted on Nov 11, 2012 by
Mike G
I'm an absolute film buff, and love writing about movies and TV. I'm particularly a fan of Asian cinema and hope to introduce people to truly great films from that region.
Follow