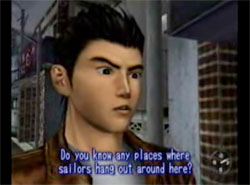 Leave a Reply to Back Show Cancel reply

Games as Art: Displacement within the Art Gallery
Alternatives to Microtransactions in Games and Apps
Mario, Link, and Scott Pilgrim: Relationships in Video Games
Casual Violence in the Borderlands Franchise
The Rise and Fall of Zynga Facebook Games
Why is it so difficult to make video game film adaptations?
The Value in Episodic Game Trilogies