Dredd 2012 Review: fear not, Stallone is nowhere to be found 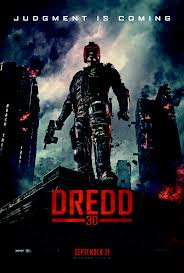 I will start by getting the bad out of the way early. Dredd, released last fall, was a miserable failure in the theaters failing to come close to covering its $50 million budget. Thus far, it appears to be selling well on video so it may find some success yet. While it was not the film that the fans of the character had been looking for, it was a good action film.

Created by John Wagner and Carlos Ezquerra, Judge Dredd (Joseph Dredd to his friends, if he had any) first appeared in 1977 and was an instant hit with readers. Set in a typical sci-fi style dystopian future, the stories of Dredd and the other Judges were violent for the time and dark but with a fair bit of wry humor mixed in. For a story set in a future United States, Dredd’s adventures seemed very British and had a sensibility that seemed odd to American readers. The character first appeared in 2000 A.D., a quirky magazine, and the humor in the Judge’s adventures was a major part of the story. Many early fans stayed with Dredd’s adventure because of use of humor.

The film Dredd however, looks at the concept and character through the dark lenses Hollywood seems to be using when looking at any comic book property these days. What little humor that works its way onto the screen is as dark as it gets and usually a direct result of a very violent act. The level of violence is extreme but handled in such a way that it is never very gory or overwhelming rather it is stylized in such a way that it is very easy to stay detached. Unfortunately this also has the effect of keeping the audience from ever really forming an attachment for or empathy with the characters. It is this lack of a deep connection to the viewer that is the film’s first great weakness. Dredd the person is a cypher and it is hard think of him as anything more than the guy training rookie Judge Anderson (Olivia Thirlby-Juno).

A bright spot is Lena Headey (Queen Gorgo in 300) as the villain Ma-Ma. Ma-Ma is a far cry from a textbook baddie and Headey injected a lot of character into an underwritten part. While Ma-Ma is not drawn from any specific part of the original Dredd stories, she feels fully formed almost immediately and is a powerful and compelling person when on screen. She is not evil, just dead inside and that deadness spreads out to everything she touches.

Unfortunately Karl Urban (Star Trek, RED) as Dredd is the films greatest strength and at the same time it’s greatest weakness. He plays Dredd perfectly, creating the same odd allure that the character has in the comics. But it is that spot-on characterization of Dredd that weakens the film as the character is not very interesting. In the comics he is a symbol that you never really get to know. The whole ‘never take the helmet off’ idea is a strong one and the character is the symbol that Batman would be if you didn’t know that Bruce Wayne was under the cowl. But that same symbol status dooms the film to being enough like the source material that it will never really grab the audience and pull them in.

Dredd (the comic) proves to me that there really are comics that should not be adapted into films. As good as Dredd (the film) is and there is a lot to enjoy, it is just faithful enough to the comics that it fails to be a great film.

Posted on Jan 20, 2013 by
Taylor Ramsey
While I quietly wait for a really good excuse to go on an interstate mayhem spree, I read comics and watch movies. While I do the "writing" here, my wife makes it readable.
Follow