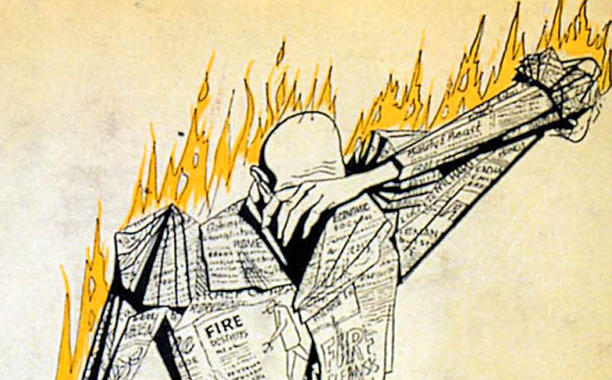 Ray Bradbury is famous for his short stories and novels in which their themes include the future, higher level technology, and usually a dystopian setting. Fahrenheit 451 is perhaps his greatest legacy; the paradoxical book about burning books. Mr. Bradbury had a deep fear of what our future beheld if we continued down our technologically driven path; whether it be televisions, robotics, or the atom bomb, Mr. Bradbury was fearful.

The novel begins with the introduction of what it means to be a fireman in this dystopian future – to set fire to every ounce of knowledge in the world. Guy Montag leads a fairly normal life as one of these fireman, and deals with normal everyday things like setting women on fire in their homes and calling for a stomach pump in the middle of the night for his suicidal wife. Maybe not so normal. What leads Montag to these conditions? Bradbury’s greatest fears of course. Technology is the very center of everyone’s lives in this world, and people need their information to be safe and fast-paced with bright colors and entertainment. Teenagers spend their spare time racing at above one-hundred-fifty miles an hour down the highways, not sparing any time to make sure they didn’t just kill a pedestrian.

So what exactly is the problem with Montag at the beginning? Why is he the main character, and what’s his purpose? Well, for starters it’s his job to destroy books, yet he’s secretly been hoarding them inside his air vents, stealing them from houses he burns when nobody is looking. What does a devoted fireman want with a book? This is a theme deeply explored by Bradbury through the novel. This paradox is used to explain the virus that is knowledge and how it spreads like, well, a wildfire.

Captain Beatty, the captain of Montag’s unit, explains the beginning of firemen back when Benjamin Franklin first created the position; however, as one might figure out, without history books to accurately detail the happenings of the past, it is long since skewed and forgotten. In a series of quick-dab-here-there-where-this-that fast-paced sentences Beatty explains the quickening and cutting of classics such as Hamlet down into a two-minute version stuffed into a reference book and long forgotten. Beatty calls books loaded guns, and firemen unload and destroy the weapons that would harm their current society where people don’t want philosophy or the ability to think. The quote below highlights the greatest warning of the novel: putting a cap on what literature is allowed to talk about is a dangerous road to travel.

“Colored people don’t like Little Black Sambo. Burn it. White people don’t feel good about Uncle Tom’s Cabin. Burn it. Someone’s written a book on tobacco and cancer of the lungs? The cigarette people are weeping? Bum the book. Serenity, Montag. Peace, Montag. Take your fight outside. Better yet, into the incinerator. Funerals are unhappy and pagan? Eliminate them, too. Five minutes after a person is dead he’s on his way to the Big Flue, the Incinerators serviced by helicopters all over the country. Ten minutes after death a man’s a speck of black dust. Let’s not quibble over individuals with memoriams. Forget them. Burn them all, burn everything. Fire is bright and fire is clean.” – Captain Beatty

These future people want now, they want comfortable, they want unity and mind-numbing entertainment that makes them forget all their problems to the point that the major populace doesn’t know what’s happening at the governmental level. Bradbury experienced the dropping of the atom bomb during World War II, and this idea that people have completely been numbed to the goings on of the government were most likely influenced by this. By the end of the novel, the city in which Montag lives is under bombardment by a military that normal citizens were not even aware existed, and were completely unaware of the fact that tensions had even been growing. The reader of course could infer this event somewhere halfway through the novel, but Montag’s America never saw it coming.

“Why is that I feel I’ve known you so many years?” – Guy Montag

“Because I like you, and I don’t want anything from you.” – Clarisse McClellen

Montag’s desire for knowledge is not all that drives him to pursue the collection of books. A strange event occurs in Montag’s life early in the novel: he meets a young woman by the name of Clarisse. Clarisse is unlike other girls her age; she doesn’t go out speeding around in cars, or listen to shell phones (cordless headphones that receive radio transmissions) all day, nor does she seek entertainment the same way others do. Clarisse is slow, calculating, and asks strange questions. For anyone else in the novel, her taking life at a slow pace would be enough for them to completely avoid her. However, this is one of the characteristics that draws Montag to her.

In short, Clarisse represents every aspect of a world with literature, and in many ways she is the epitome of a novel herself. It’s easy to understand her importance of her representations within the novel, but there are several parts of the story to which she contributes outside of being a representation of anything. Clarisse is Montag’s first friend and gives him courage to think for himself outside his normal thoughts of kerosene and flames. Clarisse also asks Montag important questions and gives important answers to lead him to the point where he needs to be to begin questioning the world around him for himself. Her most important question is whether he is happy with life; after deep contemplation on her question he comes to the realization that he is not happy. He is not happy with watching his wife slowly deteriorate into her subconscious suicidal tendencies, nor is he content with the fast-paced, mind-numbing society around him.

Though Clarisse disappears in the middle of the story and is implied to have died, possibly by one of the speeding cars, she has perhaps the largest impact on Montag’s life and truly acts as the stepping stone upon which he makes his decision to learn from books.

“Why don’t you belch Shakespeare at me, you fumbling snob? ‘There is no terror, Cassius, in your threats, for I am arm’d so strong in honesty that they pass me as an idle wind, which I respect not!’ How’s that? Go ahead now, you second-hand litterateur, pull the trigger.” – Captain Beatty

All the main characters in the novel have a great importance, however, Captain Beatty proves to be perhaps the most complex, even more so than Clarisse who holds such an air of mystery. The Captain was once an avid reader back before the time when firemen burned books, and knows all the classics inside and out. He, more than any character we see in the novel, has the greatest knowledge of what literature holds for the reader, and this is the exact reason he became a fireman. He became disgusted with the seeming contradictions and paradoxes that flooded the pages of novels and eventually gave them up entirely.

Though not known to many readers of the novel, Bradbury wrote a scene in which Beatty invited Montag to his house where Montag gazed upon a vast collection of books owned by the Captain. The books we see in this scene are merely a decoration he no longer used. Instead, they remind him why he continues to do his job, and they serve as a type of temptation to test himself daily. This scene reveals Beatty to be quite the masochist on the surface, however there is a much different man that faces Montag when his subordinate points a canon of kerosene and a lit flame towards him near the end of the novel.

The reader sees a different Captain Beatty at this turning point. The two men stare each other down with Montag having the upper hand, Beatty is defenseless, and Montag is a nervous wreck. The audience is left wondering whether Beatty wanted Montag to set him ablaze or whether Beatty truly thought Montag didn’t have it in him to kill his old boss. Beatty does what antagonists do best and antagonizes Montag by quoting Shakespeare and calls him a second-hand litterateur. There’s irony in calling a man Cassius when he has a kerosene torch pointed at you.

Whether Beatty meant for Montag to take his life and end his despair of living in a world where his vast knowledge of literature was useless, or if he simply taunted him with the idea of his former subordinate’s weakness in mind is beyond our knowledge; however, we are left to contemplate the complexity of this man written into life more than sixty years ago. Another aspect to consider is the fact that Beatty believed he had read all he could and came to the conclusion that all the philosophical ideas, theologies, and thoughts he’d come across were in contradiction with one another. The question we as the audience must ask at this junction is who’s point is correct? Do we, as readers, believe in the heart of what literature stands for as Montag does even though he has such little knowledge, or do we choose to allow ourselves to become bogged down by literature’s conflagration of ideas that don’t necessarily correspond to our own as Beatty chooses?

“But now there was a long morning’s walk until noon, and if the men were silent it was because there was everything to think about and much to remember.” – Fahrenheit 451

The end of the novel shows the city being bombed, Montag has made his way into the outskirts of the forest, and he and his new band of companions set themselves down the railroad tracks. Bradbury leaves us with this final scene as the culmination to all the building tension being released and subsiding.

With his new family, of sorts, Montag takes his place among these men of literature who have been outcast by the society from which Montag fought so hard to release himself. Each man in this group is responsible for remembering a different book or story, and Montag is given the task of holding on to Ecclesiastes; essentially, Montag is no longer Guy Montag at this point, but instead is the actual book of Ecclesiastes. The end of the novel is a new start for the life of literature, a new beginning for humanity, as the city of decadence and technology is razed to the ground by the bombs in the background. Montag’s new life begins as he loses his identity, in a way, to be replaced with something much more important: a story.

Posted on Jan 14, 2017 by
Steven Gonzales
I'm a 22 year old, soon to be English Graduate. I'm a published, yet newbie, poet, and a big fan of anime/manga, and American comics.
Edited by aprosaicpintofpisces, Ben Hufbauer.
Follow