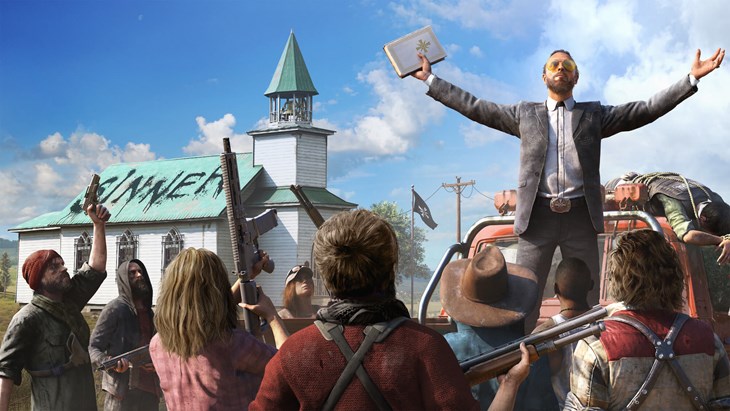 The Far Cry series is pretty formulaic. Each game employs the same set of standards, methods, gameplay sequences, and plot devices, from monologuing villains, to scaling watchtowers, to endless drug-induced hallucinations. Perhaps some players appreciate this surety, this guarantee of what to expect in a Far Cry game. They know what they are getting when they dish out their money.

But others? Maybe not so much.

Far Cry 5 attempts to veer away from some of the standard elements of gameplay known to the series. Gone are the watchtowers run by the antagonist and his regime, which would reveal portions of the map. Forget about hunting animals across the landscape to craft extra weapon holsters, ammo bags, and medikits. The open world is a lot more open, and story missions are often revealed by the player’s own exploration rather than a more linear storyline telling where to go next.

But some of the most notorious elements of gameplay in the series still exist. And the worst of them all? The capture parties.

No, capture parties did not exist in the previous installments of the series, but they do follow suit to some of Far Cry’s more annoying tendencies, which often take the player out of the game—you know, the very thing a video game wants not to do.

How might Ubisoft learn from its mistakes? Where does it often (but especially with FC5) go wrong?

Ubisoft is Obsessed With Drugs and Outer-Body Experiences

This allegation is not limited to the Far Cry series. Connor in Assassin’s Creed III assumes the form of his spirit eagle and goes on a short spiritual quest to gain answers. Edward in AC: Black Flag stumbles through a drunken stupor, encountering deceased friends and multiplying enemies.

In Far Cry 3, the majority of boss fights (if not all) are performed under the influence. Ajay visits Shangri-La for one forced mission and four optional missions in Far Cry 4, and he faces off against the demonic Rakshasas for the boss fight against Yuma.

Now in Far Cry 5, we have Bliss, a drug that the cult leaders use to control and manipulate their followers. In Jacob’s region, Jacob will occasionally alert the player via radio that his hunters are coming, giving the player a good five to ten seconds before a forced cutscene and bizarre hallucinatory sequence take place. It does not matter if you are flying in a helicopter one thousand feet in the air above unexplored terrain, alone in the wilderness and armed to the teeth, or surrounded by ten comrades at an outpost you just conquered. Jacob’s Bliss dart will inevitable and inexplicably find you, and there is naught you can do to avoid it.

Worse is Faith’s region. You may simply be wandering the wilderness when suddenly a hazy cloud envelopes you and transports you to Faith’s trippy netherworld. Or you may find yourself exploring the hills when you encounter one of Faith’s nameless henchmen with a captured civilian in his charge. You may kill the enemy and attempt to free the civilian—

—aaaaand suddenly find the civilian disappearing in a cloud of hazy dust, a hallucination created by the supreme, unconquerable Bliss drug. However you make your way to Faith, what follows next is the Far Cry staple of a villain rambling on about his or her rhetoric for every action and behavior, the “Definition of Insanity” speech that plagues every Far Cry game (on a side note, what Vaas and even Pagan Min had was charisma, the lack of which in FC5 makes the monologuing unbearable, and the villains uninteresting).

So why are these drug sequences so obnoxious? Because they undermine the gameplay. The problem with the hallucinatory boss sequences in Far Cry 3, for example, is that they are performed outside of reality. Of course, this can be done successfully as we have seen in games like Batman: Arkham Asylum with the Scarecrow sequences, but when every boss confrontation takes place outside of reality, it suggests almost a laziness on the developers’ part, a cheap attempt to make something otherwise uninteresting, interesting. It is as if they believe we players would not be satisfied with a boss confrontation that involves guns, explosions, and hand-to-hand combat. Perhaps they have forgotten that the Far Cry series is still a first-person shooter with, you know, guns.

Now if the story were entirely about drugs—which, in FC5’s defense, drugs are a large part of the story—the excruciating hallucination sequences would make more sense. But Ubisoft could’ve made the game about drugs without interrupting the gameplay for repeated delusions. It practically screams in the player’s face, “This is about drugs! Don’t you get it?”

Ultimately, after the player has endured multiple forced drug sequences in a game billed as open world, he cannot be blamed for sighing, rolling his eyes, or throwing his controller. These jarring hallucinations that remove the player from game immersion were not what we were promised with Far Cry 5.

An Absolute Lack of Seamlessness

While wholeheartedly annoying, Faith’s capture sequences make a slight bit more sense than Jacob’s, at least in terms of the deception she employs to capture the player. If Faith’s entire region is based in hallucination, then a captured civilian vanishing in a cloud of dust makes more sense than the invisible hunters that stalk the player out of nowhere in Jacob’s region.

This is more believable than a sharpshooting marksman firing a single dart thousands of feet in the air while the player flies in an enclosed helicopter. Why capture parties are relevant to the story is questionable, especially considering how the player escapes or is released after every capture. Was this the developers’ attempt to put the player close to the antagonists to allow more whispered, indiscernible monologues from the Father? Surely there had to be a better way to give the antagonists more screen time?

If Ubisoft found capture parties absolutely necessary, John’s capture parties were best handled. Giving the player the chance to escape and fight off the approaching enemies would make for a much more seamless and believable experience. It probably would’ve made the majority of players much less frustrated as well. Even if the player’s attempts to evade are always met with resistance, even if the player is always guaranteed to fail for the sake of progressing the plot and story missions, at least it makes more sense than Jacob’s homing darts and Faith’s wily trickery. At least it is relative to the gameplay experience.

Unfortunately, the lack of seamlessness removes the player from the game just like the drug sequences. The player should want to play the game, not angrily mash buttons the entire way through a forced sequence in which he has no interest. Furthermore, even if the player hate-plays his way through a more challenging or less interesting sequence, at the very least it has to make sense.

And it should definitely not take the player out of the game.

Above All, the Story Fights to Trump the Gameplay

Far Cry 5 is, at the end of the day, a video game, and video games are an interactive medium of entertainment. Naturally, one of the cardinal rules of game development is to keep the story out of the way of gameplay. In their book, Slay the Dragon: Writing Great Video Games 1, Robert Denton Bryant and Keith Giglio emphasize that “Players are often not as interested in what happens in the story [the writer has] authored as they are in what happens in the story they are authoring themselves by playing the game.” In other words, gameplay and story must cooperate. They cannot operate exclusively of one another.

Ubisoft ignores that rule here. It wants so desperately to subject the player to its story, to flaunt its antagonists and its setting. It forfeits gameplay experience for an attempt at a story in which many players were only slightly interested, or gave up on halfway through the game after realizing that, in its efforts to force story, Far Cry 5 actually pushes players away from it.

The most redeeming feature of Far Cry 3 was Vaas, mo-capped and voiced by Michael Mando. He was enigmatic, intimidating, terrifying, and unpredictable. The story actually fell off after his death midway through the game. Far Cry 4’s Pagan Min, voiced by Troy Baker, was not quite as compelling, but was still rather fashionable, amusing at times, and a less confrontational villain than most. Pagan Min is actually quite passive toward Ajay, which you discover in the secret ending and/or if you allow him to live at the end of the game. A different type of antagonist he was, which made him interesting.

The Seeds, on the other hand, are hardly interesting. They are cardboard cutouts of cult fanatics and nothing more. Bad antagonists is just one reason why the story fails, just one reason why the story does not compensate for the gameplay experience you are denied while enduring forced sequences. And if the antagonist cannot, in the very least, make up for gameplay experience, then the game is already on a downward descent.

In an interview with The New York Times, game writer Tom Bissell, who has most notably written for Gears of War: Judgment, states that he “realized pretty astonishingly quickly that the more writerly [Gears] got, the more it stopped feeling like a Gears game…And our biggest goal, early on, was to get the hell out of the way of the things that make Gears awesome” 2. Bissell knew that the game was about gameplay, not about story, and he and the rest of his staff took that to heart when developing the game.

Unfortunately, Ubisoft thought itself the exception to the rule. Are there games in which story surpasses gameplay? Possibly. After all, what makes The Last of Us more than just another zombie game is, in fact, its story and characters. But ultimately, it is still a game, and players do not want things forced upon them. They want to interact, to enjoy the experience even in the most frustrating of times.

Ubisoft’s attempt to reinvent the wheel has left Far Cry 5 wanting for more when its very premise was interesting all on its own. The more Ubisoft added to the story, the more it doomed the game. Perhaps in the future, Ubisoft will consider the lamentations, the cries, and the curses of its players and fans, and opt instead for more interactivity than story.

Until then, we have no choice but to suffer through a capture sequence—again.

Posted on May 10, 2018 by
Christina Airola
MFA dropout. Wielder of B.A. in English. Writer of the whimsical. Lover of the video games. Eater of the foods.
Edited by JamesBKelley.
Follow

Games as Art: Displacement within the Art Gallery
The mod – new gameplay and community
Increased Film and Television Adaptations of Popular Video Games
The Minecraft loophole: a library of banned journalism
Storytelling in Gaming
The Outer Worlds, a centrist’s critique of capitalism.
The ‘Dadification’ of Male narratives in Video Games