Feminism in Pop Culture: the Good, the Bad, and the Topless

It’s undeniable that women have come a long way in society. From gaining the right to vote in 1920 to holding honorable positions in politics and media, women have been empowering symbols for the new generation. But with every accomplishment comes criticism; the idea of feminism and the feminist movement have been a hot topic in popular culture for quite some time. With the gradual deterioration of typical gender roles in the homes of America, it appears as though women are taking a giant leap for humanity. However, the debate still continues if women should really go against the grain of what was once normal. Whether it be in music, television, or through campaigning, feminism still remains a touchy subject.

Beyonce, a known feminist in the music industry, has shed some positive light on women and feminism through her track Run the World (Girls) from her album 4. The song itself is a feminist anthem which goes against what women used to represent in society. Some of the lyrics are as follows:

I’m repping for the girls who taking over the world help me raise a glass for the college grads […] I work my 9 to 5, better cut my check
This goes out to all the women getting it in you’re on your grind
To other men that respect what I do please accept my shine
Boy you know you love it how we’re smart enough to make these millions
Strong enough to bear the children then get back to business.

The rest of the song consists of a chorus of “who run the world? (Girls)” repeated multiple times, but the main idea of the song is to reflect on how far women have come in society. From being typical housewives with limited education and rights, to holding positions of power and college degrees, Ms. Knowles is giving women the support they deserve to embrace themselves and their accomplishments all in hopes to inspire other women to take a stand against the still present inequality. With the line “strong enough to bear the children then get back to business,” Beyonce is telling women and men alike that yes, women are strong enough to endure the pains of pregnancy and childbirth, but they are even stronger to get back to their careers afterwards and still make a living, rather than being tied down to the household.

In recent years with the release of her self-titled album Beyonce, Beyonce gave the world yet another feminist anthem with ***Flawless, which features audio of a speech from author Chimamanda Ngozi Adichie. The monologue is on the lengthy side, but to paraphrase, Adichie expresses her concern on the fact that society still portrays negative body images to girls, while also pressuring them to marry. According to Adichie, the media also tells girls to focus their attention on receiving affection from a man, rather than aspiring to be successful in the workforce. The monologue ends with, “feminist: the person who believes in the social, political, and economic equality of the sexes.” The most important part of that quotation is “equality of the sexes.” A common misconception of feminism is that it is a men hating movement. Women have been discriminated for decades, and the feminist movement isn’t about putting men down: it’s about putting women on the same social, political, and economic level. The remainder of the song, much like Who Run the World (Girls), contains a repeated line of “I woke up like this, flawless.” And while most women would kill to wake up looking like Beyonce, most of us wake up with drool on the pillow and smudged mascara from the night before. In this song, Beyonce, again, wants to empower women to not focus on their flaws, but focus on what makes them flawless.

While many women in pop culture are empowering women to take a stand and break the mold, some are going against that notion. In a recent interview with Redbook, “The Big Bang Theory” actress Kaley Cuoco-Sweeting found herself in hot water after claiming she is “not a feminist.” She was hit with harsh backlash after she was quoted as saying:

I was never that feminist girl demanding equality, but maybe that’s because I’ve never really faced inequality…I know it sounds old-fashioned, but I like the idea of women taking care of their men. I’m so in control of my work that I like coming home and serving him. My mom was like that, so I think it kind of rubbed off.

Many on social network sites called her words “disappointing” and shamed her for her comments. Others, however, debated that what she said does not “make her any less of a woman,” but rather just makes her “a good wife to her husband” and chooses to live that lifestyle. While many said that every woman has their own way of caring for their husband, others were still bothered by her words. The comment Kaley made of how she “never really faced inequality” could bring race into the picture, as well, adding a whole separate debate.

Cuoco-Sweeting then attempted to clean up the mess she made by taking to her Instagram page to apologize “if anyone was offended.” She said that her comments were “taken out of context” and went on to praise the women that have “paved the way” for her own success and many other women, even if their ideas are different from her own. This situation shows that the idea of feminism and women empowerment is still an on-going issue. Even though women in society have made tremendous progress, this interview opened many eyes and showed that women still have a long way to go before full equality is reached.

Women everywhere, not just in the public eye, are taking a stand against inequality and exposing more than just support for female empowerment. The “Free The Nipple” campaign is a current film and feminist movement to put an end to female censorship. 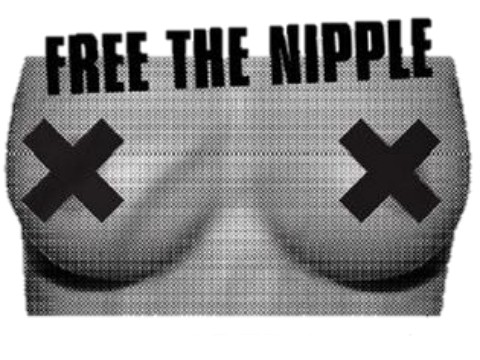 According to the Free The Nipple website, “in the USA, it is effectively illegal for a women to be topless, breastfeeding included, in 35 states…an exposed nipple can take a women to jail for up to three years and cost $2,500 in fines.” Some may call this social acceptability while others may call it sexist inequality. Regardless, Free The Nipple is gaining popularity through celebrities such as Miley Cyrus, who often shows support for the film and campaign on her Instagram page. The film itself is inspired by true events and follows a group of women who roam the streets of NYC topless, all while committing attention-getting stunts, such as graffitiing walls. The film puts everything into perspective, asking “what is more obscene: violence or a nipple?” The right for a woman to breastfeed in public and more “balanced” censorship is what the campaign is asking for, and appears to be empowering women across the globe.

Another campaign that has gained an overwhelming amount of media attention is the video “F Bombs for Feminism” from the organization FCKH8. FCKH8 is an over-the-top-in-your-face organization that deals with topics of gay rights, domestic violence, and in their recent ad, feminism. The video consists of young girls who could use a mouth full of all the soap in the world. Dressed in princess fairy outfits, these young girls seem like your every day children, until the open their mouths.

The video was aiming for shock value, and they definitely achieved it by having 6 to 8 year olds curse repeatedly, all in the name of feminism and equal rights for all. T-shirts supporting the non-profit organization display the words “Girls Just Wanna Have FUN-damental Rights,” but many have criticized the ad for subjecting such young girls to adult language. However, much like the Free The Nipple campaign, FCKH8 just wants to put everything into perspective. Those at FCKH8 fire back at the words they have received by saying, “What’s more offensive? A little girl saying f***, or the sexist way society treats girls and women?” Although the video has gotten countless amounts of hate, the organization has basically said, “FCK it.”

The world of literature and cinema have also taken a stab at what feminism really means with the “Cool Girl” speech from the book to movie franchise “Gone Girl.” This speech tackles the question, “what do men really want in a woman?” Being a “cool girl,” as defined by this speech, is a girl that is a walking contradiction. Gillian Flynn, author, writes:

With ideas such as this planted into the minds of girls everywhere, it makes the think that they can actually achieve this male desired persona, that is ultimately unreachable. Flynn also writes that men always want a “strong woman” when, in the grand scheme of things, is altered drastically when a woman calls herself just that. Flynn writes that when a woman describes herself as “a strong woman” is gets misconstrued into “I hate strong women.”

So, with feminism still being an unresolved topic in the media and society, do women still have the option of living an “old fashioned” lifestyle with outdated gender roles, or are the current movements and songs we hear today granting women the opportunity to make a change? Many famous women such as Katy Perry, Kelly Clarkson, and Carrie Underwood have strayed away from using the term “feminist” because they believe it comes off “too strong” or may have a “negative connotation.” Since when did fighting for gender equality turn into a bad thing? Many have been brainwashed in a sense to believe that feminism is something to stay away from. Unfortunately, in many cases, feminists are viewed as those who hate men and even hate women who look a certain way. The opposite can be seen in many cases; one of which being HeForShe, a feminist organization which encourages men to fight for gender equality, as well.

In the end, we are all humans; when did it become the norm for one group of humans to discriminate another group of humans based solely on their genitalia? When did the image of feminism turn from an equality-driven, strongly supported movement, to somewhat of a taboo? Has feminism taken a turn for the worse, or are these words just adding fuel to the feminist fire?

Posted on Jan 10, 2015 by
Samantha Brandbergh
Journalism student at Rider University with the hopes to become a music and entertainment columnist.
Edited by S.A. Takacs, Thomas Munday.
Follow