FTL: Faster Than Light Review: Permadeath Is The Final Frontier

From the big hearts and minds of the small indie studio Subset Games comes a rougelike space simulator game that will make you laugh, cry, rage and probably do all three in the same setting. Yes, FTL: Faster Than Light is THAT type of game. In this remarkable PC title, you take on the role of a spaceship captain that is charged to deliver some important information to your allies in another sector. With a limited crew and somewhat battle-ready vessel (both which can be customized throughout the game), these are the only resources that stands between you and a fleet of space pirates that want you dead and are closing in quick. That and a couple of fortuitous shenanigans that might or might not spell your doom. Most likely, they will spell your doom, but more on that later.

To meet your goal of reuniting with your allies, you will have to move around on a small mini map that shows various planets and one that holds an exit. However, as you move from planet to planet to reach it, you will encounter random events such as: salvaging for scrap (money used to upgrade your ship and buy various items/crew at stores), helping innocent by-standers that might provide rewards, and other random events. “Risk versus reward” is one of the biggest features of FTL and one that governs the game heavily. For example, at one point into my game, I was running low on scrap and my weapon system was not the best. On my move to another planet, I was presented with an option to either go through an asteroid belt or move on. I choose the first option and found a powerful weapon, one that ultimately helped me defeat the final boss. I did it again on another play-through and took some damage to my ship, desperately searching for a store to make repairs afterwards, but not before I got pelted with a few random pirate battles. In this case, my aforementioned doom was almost at hand, but thanks to some early decision-making (such as to buy a repair droid back in the 2nd sector), I was able to keep myself alive through four battles and eventually located a store.

Fights in FTL are enjoyable, yet static, but by no means easy. In battle, you can either set commands in real time or hit the space bar to pause things. You can target weapon systems to stop enemy attacks, shields from protecting the hull, or even board the enemy yourself with a purchased teleporter. Hit the space bar again and the battle will resume and you can see the results of your choices and do it as much as you like, until you feel ready to take it all on the fly. After fighting a few random battles, they will get familiar, allowing you the foresight to make the best decision to end conflicts quickly. However, as you progress through each sector, enemies will get stronger; forcing you to use new strategies or upgrade your ship. If you win, you are rewarded with fuel, scrap, parts, and even extra goodies. Get cocky, underestimate the enemy, and lose the fight you are in…well, that is it. Permadeath. That means you have to start a new game and do it all over again. 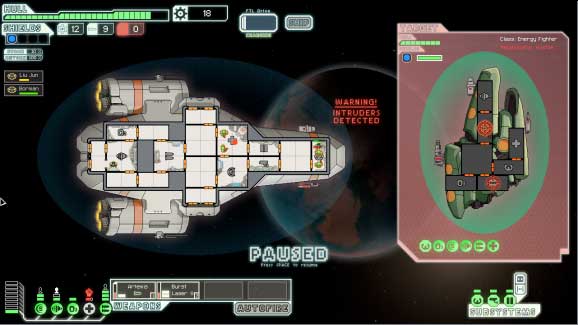 While the permadeath aspect is frustrating (and classic staple of rougelike games), it is also an important part of FTL, since it encourages multiple attempts and play-throughs. This is especially key when it comes to unlocking hidden ships. In addition to the encouragement factor, it also serves a teaching moment; allowing you to reflect on what you did wrong and do it differently. Even though that means trying to assemble the idea ship build, crew, and conditions – FTL makes it fun and exciting rather than feel like a complete chore and bore. Also, while you enjoy (or suffer) through your many defeats/victories, the game also sports a palatable soundtrack by Ben Prunty. You can purchase it off of Steam or Bandcamp if you like what you hear.

Rougelike games are a shrinking breed among many genres in the gaming market (except for Japan). With indie developers like Subset Games, I am at least glad to see that they are not completely forgotten or for that matter, still have a lot to offer when tackled ambitiously. Taking some of the best elements from the genre such as: permanent death and rpg mechanics while executing it with style and keeping it entertaining, FTL simply just works for all those gamers that enjoy a challenge. Did I mention it also has its own modding community? Almost hard to believe that such a game was a Kickstarter project once.

Posted on Nov 26, 2012 by
DantePruiett
Anime enthusiastic, gamer, amateur blogger, and nerd with an insatiable hunger for all things tech.
Follow