Futurama: Gone Before Its Time?

And so it came to pass that on September 4th 2013, Futurama aired its final episode. Again.

It’s a sad history that the show seems to keep revisiting, what with this being its fourth finale. Except this one holds the ominous title of “official” finale. I guess we, the fans, will never really understand the ins and outs of why this keeps happening. To us, the show is still in its prime and there appears to be no logical reason for its cancellation.

At least during its tenure under 20th Century Fox we could point to the excuses of a poor time-slot, inadequate marketing and just general apathy from those executives up at the top. But since it’s revival on Comedy Central in 2008, Futurama still felt as fresh, inventive and funny as it did back in 1999, although there will always be split opinions. And with it being safely out of reach from 20th Century Fox, it seemed like the series was on safe enough ground to continue delighting us for many seasons to come. So this cancellation has come as an even bigger shock, not just to fans but also creator Matt Groening and the stars of the show. Groening has insisted that they will shop around to find a new distributor and that the team still have “way more stories to tell.”

I join the mindset of my fellow fans in sincerely hoping that they do. Yet, in the midst of all the wailings that Futurama deserves to go on and is infinitely better than The Simpsons or Family Guy could ever hope to be, this argument has inevitably risen – maybe the show is better off ending on a high and in its prime rather than being dragged along by the scruff of its neck towards TV infinity. Not to say I won’t miss the show and if the creators believe they have the material then by all means they should try to go forth. But when you take away the possibilities for new stories (and let’s face it, given the set up, those possibilities are infinite) and instead think of Futurama’s story arc and the development of its main characters, then could the show have arrived at its natural end? 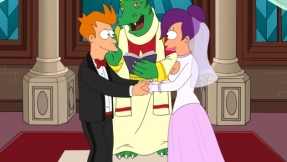 Consider the subject matter of the most recent finale, titled “Meanwhile.” It centres on Fry and Leela finally tying the knot after seven seasons worth of will-they-won’t-they teasing. From the very beginning in “Space Pilot 3000”, their relationship has been the heart of the show’s overarching story and to see it brought to a close this way really does seal the deal. We’ve suffered through years of Fry being rejected, seen hints that maybe someday the two will finally get together, before finally seeing the two embark on a tentative relationship which grew stronger during the Comedy Central years, ending up leading to this ultimate vindication.

The episode prior “Stench and Stenchibility” featured the show’s resident loser Dr Zoidberg finally finding love and it seems like this one might actually stick. Just a further way to bring everything to a close and give our characters and by extension, the viewers, what they want. When all is said and done, our beloved characters have gotten the happy endings we’ve been waiting for and maybe, though we don’t realise it yet, this is the best outcome we could’ve hoped for and “what’s next” may be better left to our own imaginations.

On the other hand, you can also make the argument that there’s still plenty of room for expansion. After all, just because Fry and Leela are now husband and wife doesn’t mean that their story has used up all its potential. If anything, it’s paved the way for all-new jokes and drama. There’s plenty of other characters who can have a turn in the limelight and, as I mentioned before, the show’s premise means that pretty much any story idea is up for grabs. Zany is the name of the game. Adding to this, seasons 6 and 7 have delved much more deeply into character development, with episodes such as “Lethal Inspection”, “That Darn Katz”, “The Tip of the Zoidberg” and “The Bots and the Bees” giving hidden depths to Bender, Hermes, Amy, Zoidberg and the Professor, the latter four previously seeming to be just eccentric side characters. If the show did continue, the writers should continue in this vein. The more we learn about these characters, the more we care about them after all.

But if the show does come back, then what? Will we get another couple of years of enjoyment and then be crushed by cancellation once again or will we still be tuning in ten years from now? And if that’s the case, what will the quality of the show be by that point?

Consider The Simpsons. Not to turn this into a diatribe about the declining quality of that show, but the comparisons between the two sister shows are pretty much inevitable. When I can catch it on television, I still enjoy it. It still has great moments and is still very funny and occasionally heart-warming, but the limitations of its world and the length of its tenure on television (it holds the honour of being the longest-running prime-time sitcom in American TV history) have taken its toll in recent years. The stories have become more outlandish and characterization has veered wildly in all directions in order to give the show more space to breathe. Weirdly enough, it’s feeling a bit more Futurama-ish in terms of tone.

Where once The Simpsons would have episodes featuring Bart failing classes, Lisa feeling depressed about her place in society and Homer and Marge fighting against temptation and their marriage going through rocky patches, now they have episodes featuring: Homer on death row only for it to turn out to be a reality TV stunt; Bart getting ostracised by the whole of Springfield just for blowing a baseball game and being pushed to the brink of suicide; an episode which ends with the family apparently imprisoned on a drug-dispensing island; and that infamous episode with Homer and the panda. There’s Homer’s deliberately over-the-top choking of Bart and then there’s stuff like this. It isn’t nearly so funny when it makes you mad or confused instead. This descent into questionable behaviour in the name of entertaining us feels illogical and symptomatic of the fact that Fox would rather be made into Torgo’s Executive Powder than let our favourite yellow clan march out into the sunset.

Futurama has its own episodes that are less than beloved but, for the most part, the writing is still strong enough to hold it up. If the show were to continue for a lengthy period, who’s to say it wouldn’t suffer the same problem with quality that The Simpsons now faces? Basically, the longer you drag a story out, the more susceptible continuity and canon become to falling apart. The characters reach the point where they can’t be developed any further, becoming one-note versions of their original selves and the plots become more inane and repetitive in an attempt to keep things fresh.

Imagine if you will, some of your own favourite television series carrying on for about ten years past their prime. For example, Friends. I know people who were growing weary of the Ross/Rachel angle long before she got off the plane so picturing it carrying on even for a couple more years just feels like a bullet dodged. Shows that can run for decades, such as Doctor Who, manage to survive due to change-ups in formula and cast and because the set-up is perfectly designed for one-off stories with very loose continuity and allowing change to happen naturally – a luxury that most other television programmes don’t have, therefore leading to stagnation.

The problem seems to be a reluctance to know when enough is enough and to let the story burn out in a glorious haze rather than keeping it on life support. Key elements of storytelling seem to have been forgotten – it’s not just the plot that makes the ride worthwhile, it’s the characters and seeing how they change. Once both have concluded, they shouldn’t be forced to carry on into the unknown unless there is a better reason that getting high ratings. Breaking Bad, for example, is about to finish after five seasons, to rave reviews and fans grieving the passing of a masterpiece. But at least that show is ending where it should and the creators know to end it now because it makes sense in terms of where the plot has been leading all this time. They know not to keep it going because of lingering fondness.

Yet, that very emotion is what brings me back to Futurama. I know other fans may not share the same opinion and despite what I’ve argued, I can’t rid myself of the niggling feeling that we’re just not quite done yet. The characters have enjoyed development, yes, but perhaps not quite to the point where there’s nothing left to know about them, even if some of the major story arcs have been brought to a close.

With that in mind, the conclusion that I can come to lies somewhere in the middle ground. I don’t want to see Futurama become utterly exhausted from a long stint on air but at the same time, I feel it has enough mileage left in it to carry on for a little while longer. I’d like to see it come back, eke out another couple of seasons, maybe then bowing out gracefully before I and other fans grow sick of it.

In the end, I guess we will have to wait and see what happens. We have one more adventure with the Planet Express crew on the horizon, with a crossover with The Simpsons, titled “Simpsorama”, coming our way. But after that, the waiting game commences again. I place my faith in the show’s creators. The curtain may have closed for now, but hopefully “the world of tomorrow” faces a better chance of survival this time around.

Posted on Sep 27, 2013 by
Jennifer Carr
I'm a budding writer who doesn't claim to be an expert in the fields of film, animation, literature and TV, but I do enjoy making scribblings about them.
Follow