Game of Thrones: Top 5 Reasons Why Season 3 Can’t be Missed

HBO’s hit fantasy drama series Game of Thrones will be making its long awaited return to our screens for its third season on the 31st March, just a little over three weeks away! Producers David Benioff and D.B.Weiss stated that because of the third book A Storm of Swords (ASOS) sheer size they will be splitting the book into two seasons. By looking at the paperback version of ASOS which is split into two parts we can make an accurate assumption of just how much action will be squeezed into this season; even with half the book’s events being showcased this time around there are droves of brilliant moments to look forward to if you’re a book reader. Below I have narrowed all the action down to the five scenes I’m dying to see in the third season, and I can’t stress it enough non-readers don’t go any further there are seriously major spoilers! 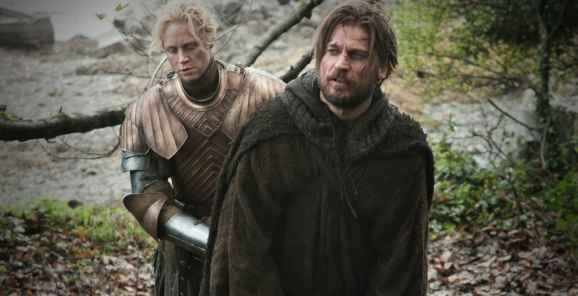 Following Jamie and Brienne’s capture and imprisonment at Harrenhall by Vargo Hoat’s unsavory band ‘The Brave Companions’ Jamie is exchanged his freedom for the hefty ransom his father Tywin will pay the band of sellswords for his return. Brienne meanwhile isn’t so fortunate, she is forced into a ridiculous pink dress and tossed into a fighting pit with a bear unarmed and without assistance. This is where things get interesting, a now one handed Jamie rides back towards the castle, dives into the pit and rescues the damsel in distress as if a knight in shining armor read about in fairy tales. This scene is arguably the biggest for Jamie’s character development as he unexpectedly sways from his nonchalantly cruel ways transforming into the person that the majority of us book readers have grown very attached to. Unfortunately Vargo Hoat and his hysterical lisp splattered dialogue (“Thee’th worth a bag of thapphireth!”) will be out of the affairs, which I can only imagine diminishing from how sublime the scene was in the book which is why I’m going to have to place it at number five.

4. The Fight at the Fist

Season two left off where A Storm of Swords begins, with the White Walkers making their first prolific appearance as they take the fight to the Night’s Watch at the Fist of the First Men. The show has a knack for capturing the scale and monstrosities of any given battle without flaw which will undoubtedly mean a powerful scene will ensue when the watch are ruthlessly massacred atop their encampment at the fist. I can see the on screen adaptation of this battle toppling the experience provided in the book. The HBO series has an oft-times controversial habit of slightly deviating from the story the books have laid out leading to a strong suspicion that Samwell may end up killing his first undead during the battle rather than in the escapees march back south, earning his nickname ‘Sam the Slayer’ and a large development for his character. However in spite of all the above potential there is a possible chance the battle may be a bit brief or lacking in extravagance due to limitations presented by a budget likely exhausted on later moments in the series, it is for that reason the fight at the fist is number four on the list.

3. The Wildlings in Westeros

Jon Snow now skulks around with the colossal band of free folk under the leadership of Mance Rayder, acting as a double agent in the eventuality of an attack on The Wall. Fair assumption can be made that although we wont be seeing Stannis heroicly come to the rescue of the watch and the realm this season; on the other hand we will undoubtedly follow Jon, Ygritte and the small wildling recon squad led by Styr & Jarl as they scale The Wall, roam “The Gift” and assault a weakened Castle Black. Through the campaign Jon’s false allegiance exposes a humanized look at the Free-Folk, and his final transition from boy to man when he courageously seizes the only opportunity to alert his friends at Castle Black of their coming arrival. All the while Jon’s love (and chastity) falls to Ygritte who’s forlorn death I foresee coming around the last two episodes; the effectiveness of her death in the series is liable to ruin if Harrington and Leslie scramble the line delivery but their performances so far leave me with every bit of faith in them. Here’s hoping Tormund also manages to slip in a thing or two about the size of his member, Har!

2. The Brotherhood Without Banners

Shortly after her stint at Harrenhall, Arya bumps into a few members of The Brotherhood Without Banners as she meanders toward Riverrun. Arya is forced to travel with them to their hideout where she meets the brotherhood’s leader, the thrice revived Beric Dondarrion and a captive Sandor Clegane who is then forced into a trial by combat following Arya’s accusations of murder. The Beric vs Sandor fight made for an utterly euphoric reading experience which I can only see translating into a further improved scene on screen with the flaming sword prop and bad ass fight choreography that can been throughout the last two series. Beric’s revival of Catelyn Stark could lead to more stunning visual effects and perhaps even a quick look at the terrifying, mutilated Lady Stoneheart that Catelyn becomes before playing her more prominent role in season 4. Seriousness aside I’m additionally expecting a lot of the series best banter to come from Lem Lemoncloak, Anguy and the musician Tom of Sevenstreams be it through one of his famed songs or simply conversation on the road.

Granted this was an easy choice to make for number one but that doesn’t make it any less deserved. Commonly known as A Song of Ice and Fire’s utmost heartbreaking event, The Red Wedding puts an end to not only Robb and Catelyn’s story lines, but also the foothold of the Northern Rebellion and any immediate possibility of revenge on the Lannisters’ for the North. In spite of this “The Red Wedding” demonstrated that George RR Martin possesses an almost unparalleled storytelling ability and skill to evoke emotion from his readers; if Benioff and Weiss can illustrate the sickening horrors this massacre with even half the finesse of Martin they will conceive a moment of TV tragedy like no other, mark my words. The furious reactions from show watchers, much akin to Eddard’s death, will provide us book readers with plenty to snigger at. Unfortunately this same fury could cause problems for HBO’s viewership if there isn’t a sort of swift recompense, perhaps Arya coming back or maybe Daenerys success at Yunkai? Regardless, “The Red Wedding” will be Game of Thrones crowning moment and is reason enough to tune into season 3 later this month.