Likely Expectations for Season Two of ‘House of Cards’

With my general distaste for all things politics, I usually avoid shows about them like the plague. Sunday morning news shows, cable news channels, C-SPAN—none of these are on my must-watch list. And even scripted shows about politics usually turn me off simply because my mind is conditioned to think that Congress actually runs the way it is being depicted on any given show. So when Netflix came out with House of Cards, I was intrigued but not necessarily overenthusiastic about viewing it. However, I put my normal biases aside and gave it a watch because Kevin freaking Spacey is in it. I thought that good enough reason to at least check it out. Much to my surprise, I had the entire first season completed in less than two days (binge watching for the win!). Needless to say, this show is ridiculously amazing.

In a time when television has given us many deliciously wicked, Machiavellian assholes, Kevin Spacey’s Francis Underwood ranks in the top, sneaking past some veteran TV antiheroic villains. His portrayal of Congressman Underwood is just one of the many reasons why so many people fell in love with the first season of House of Cards. I’m anxiously awaiting the return of the show, and there’s no way I’m the only one. This left me to ponder some of the things that we can potentially expect from season two of the show.

When thinking about season two expectations, one can’t help but to think of how the season one cliffhanger involving Zoe, Janine, and Lucas will play out. As season one came to a close, the viewer became the fourth person in the room as the aforementioned people put together the pieces of the Russo puzzle. They finally caught on that Francis intentionally sabotaged Peter and the Pennsylvanian governorship in order to advance his own political aspirations to become Vice President—just one more step in Francis’ ultimate goal to take over the world Washington. In season two, we can expect a lot of Zoe/Janine/Lucas centered stories as they plot the best way to bring this amazingly convoluted story to the public. 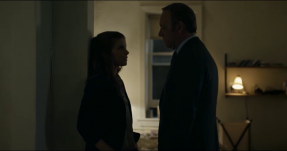 However, with the Russo story going to press, expect a lot of trouble for Zoe, Janine, and Lucas. Janine already has Francis’ right-hand man, Doug Stamper, on her back. And because of the nature of the discovery, we can likely expect quite a bit of Zoe vs. Francis face-offs. If this story goes to press, there is no doubt Francis will be his charmingly manipulative self and deny the accusation on all fronts. In order to discredit Zoe, would he reveal their affair, thus making her appear to be someone who will sleep around to get to the top? Likely. What about discrediting Zoe and Janine’s work publication, Slugline? Is it plausible to expect Francis to claim the up-and-comer Slugline is simply looking for a story to boost its credibility, and that this was just the juiciest damn story to do it? You better believe it. Their only hope may be to find a way for Lucas to get the story published at his employer, The Washington Post. Francis will stop at nothing (as we’ve seen) to take anyone down if it comes between him and what he wants.

Perhaps the most anticipated aspect of this story is the fact that Francis actually killed Peter. Zoe, Janine, and Lucas have only stumbled onto the fact that Francis intentionally set Peter up for destruction. They, along with pretty much everyone else, save Stamper, have no idea that Francis murdered Peter. It’s questionable if the writers will have this fact revealed, but my guess is to expect it. However, compiling my knowledge of how television writers work, we can probably expect that revelation to come at the end of season two. Can you imagine the reactions when that comes to light? I’m sitting on the edge of my seat, biting my nails just thinking about it. Mark my words; Rachel is going to play a huge factor in this story. Something in my gut told me during season one that she won’t be able to live with her part in all of this. She may be loyal to Stamper now, but I don’t expect for that to hold up by the end of season two. Between Janine, Lucas, and Rachel, expect characters who seemed rather peripheral at first to play a much more significant role, especially as this story starts to unravel. 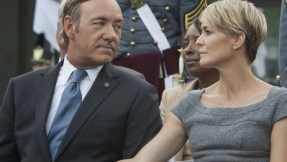 Francis’ Vice President storyline is, of course, going to be one of the central plots for season two. The way this plotline intertwines with my previously mentioned expectations is, I think, going to be a huge focus in season two. We know that Francis is one half of a mighty power-couple; his wife Claire craves power just as much as he does. But I expect that Francis’ Vice Presidency is going to cause some tension (more than what was seen in season one) in his marriage. Because of the way the Vice President scenario happened (i.e., the current VP stepping down to take over the vacant governor spot in his home state of Pennsylvania), there is going to be a massive focus on Francis—more than there has been in the past. Claire likes her man in power, but Francis is going to have a whole new level of power. Is she going to like that his power is taking off while hers seems to be dwindling, mainly regarding her organization? My gut is pushing me toward no.

With his new level of power, it also puts Francis in a vulnerable spot. In theory, he has so much more power now to wield over Zoe. But on the flip side, Zoe also has a new level of power to wield over Francis. Socially, politically, economically (fill in the blank with just about any other societal “-ally”) Zoe is so much further down on the totem pole than Francis. But, Zoe has information on Francis, and he has much more to lose now. She will definitely be an obstacle for him in season two. We can expect the Vice Presidency to be a bigger headache and more troublesome than Francis anticipated—enter business billionaire Raymond Tusk. I think it’s safe to expect Raymond to play a bigger role in season two, and I have a feeling he won’t be Francis’ best friend by the close of the season.

Another storyline that was gaining traction towards the tail end of season one was Claire and her newfound desire for a child. It was made no secret that she and Francis decided long ago they didn’t want children. We found out that she has had three abortions in the past. Now, Claire is consulting fertility doctors to gauge her likelihood of having a baby. It’s safe to expect this story to be a substantial subplot in season two. And it’s also safe to expect that the viewer will find out the real reason behind this sudden aspiration to be a mother. There are several routes to take when thinking about Claire’s motivations.

While having a conversation with Francis, Claire ponders what their legacy will be when they’re gone and there’s no one left to enjoy the benefits of what they’ve accomplished. Having a child simply to leave someone behind who can enjoy her and her husband’s legacy falls in line with the way Claire thinks. She’s all about power, and she doesn’t want her and her husband’s hard work to be forgotten after they are gone. It’s possible that this is the only reason Claire wants a child, but I think there’s more to it. 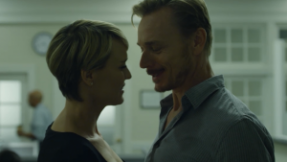 Claire is a complicated, conflicted character. It could be posited that she actually wants a baby because she wants more out of life than she’s currently getting. Her interactions with Adam show that deep down she wants something a little different. She is so much more carefree when she is with him, and the impression is given that Adam is her true love in life, not Francis. It can be broken down that she loves Adam’s heart and soul and loves Francis’ power and influence. Perhaps Claire is under the impression that a baby will provide an emptiness she currently feels in her life. Regardless, it should be expected that Adam will return in season two providing a similar turmoil of the heart for Claire. But if this theory doesn’t appeal to the cynics amongst us, I have another potential expectation regarding Claire’s sudden need for a child.

Claire has a defense mechanism: when she feels threatened, she’ll look out for herself despite the cost. Claire is being sued by her former employee, Gillian, who is pregnant, for wrongful termination. Despite attempts to settle out of court, Gillian has insisted upon taking the case to trial, saying that there are plenty of other former employees of Claire’s who are ready and willing to testify. With the imminent threat of a courtroom battle royal, Claire confides with her lawyer. She seems confident that Gillian doesn’t have a case, but her lawyer insists that jurors are sympathetic towards expectant mothers. Is it possible Claire really wants to get pregnant only to also appear sympathetic to a jury, putting herself on level playing ground with Gillian? I think it’s definitely a possibility. Gillian has threatened Claire’s power and her organization, and because of this Claire will stop at nothing to take someone down who is threatening her. We already know Claire to have flexible morals, so this wouldn’t be too shocking. In season two, we should expect Claire to take no prisoners when it comes to this lawsuit.

These are by no means comprehensive expectations for season two of House of Cards, but I believe these to be some of the more important issues that we’ll see faced as season two begins and progresses. Definitely expect a season of ups and downs, twists and turns, conflicts and tribulations. Season one was a hell of a ride, and season two is going to be the fallout from that ride. If there’s one thing, though, that we can expect from season two, it’s that season two is going to show us which characters possess the real power.

Posted on Jul 30, 2013 by
Robert Humphrey
Grad student with an interest in pop culture broadly and television and film more specifically. I have television on the brain 24/7. It's safe to call me a TV addict.
Follow