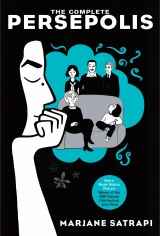 I was first introduced to The Complete Persepolis by Marjane Satrapi in a literature class last fall. I ended up finishing it one sitting, unable to put it down. I was required to read it again in a different class the following semester which indicated to me that this graphic novel was very important.

It struck me that this graphic novel was not only quite popular (listed as #5 on Newsweek’s ten best fiction books of the decade) but also being taught alongside timeless classics such as Pride and Prejudice, Jane Eyre, and Wuthering Heights, prompting me to ask: why is this graphic novel so important? How is it that a graphic novel has made its way onto the syllabus of classes around the country and into my own literature classes, not once, but twice in one year? It seems that this is a question of the canon—can the literary canon grow to accept graphic novels?

The Western canon is essentially a body of literature (or music or art) that has proven to be highly influential on culture and society. This means that any book that has had a compelling influence on a significant number of people becomes a part of the canon. The canon can and should be expanded to include graphic novels, due to their growing popularity.

The graphic novel is a fairly new genre which began with cartoonist Will Eisner in 1978. His collection of stories about a poor, crowded Jewish neighborhood in the Bronx called The Contract with God, coined the term “graphic novel”. Since then, the graphic novel’s popularity has skyrocketed, especially among young adults. It is important to distinguish a graphic novel from a comic book—graphic novels are generally longer and tells a complete story, unlike comics which are issued in successive installments.

With the rise of graphic novels comes their inclusion into curriculum across the country, as instructors embrace their literary merits. Both teachers and professors are particularly drawn to this genre given its ability to engage the reader as a visual medium that combines text and art, adding to the variety and excitement that a graphic novel presents. Graphic novels can engage even the most reluctant readers, lending to its use in the classroom as a tool for literacy.

Persepolis isn’t the first graphic novel to be taught in the classroom; other graphic novels have made their way into the college syllabus and even high school curriculum, given their appeal to young adults. Popular titles with powerful storylines such as Maus and 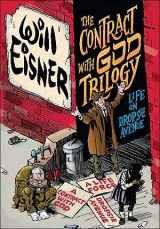 even Watchmen have also been taught. Maus was one of the pioneers of the genre; initially conceived in a three-page comic strip in 1972 and finally published in 1991.

I believe Satrapi’s extraordinary story is made much more effective through the medium of a graphic novel. By doing so, Satrapi has lifted her message out of black-and-white words on a page and has illustrated it in front of the reader’s eyes. The graphic novel is universal and complex in a way that 18th century classics cannot be. By being able to breach the barrier between those who typically read lengthy novels and those who prefer visual representations, graphic novels provide a unifying medium for literary experiences. As a genre, the graphic novel engages a wide audience, is easily translated into many languages, and is appealing to the eye.

The storyline of Persepolis itself is fascinating—I couldn’t put it down my first time through. It’s an autobiographical novel about growing up in Iran during the Islamic revolution. This graphic novel is quite illuminating for someone unfamiliar with Iran and its people; it is an essential look at the life of a girl in Iran and her relationship with her very liberal parents and how she relates to her peers. In her dealings with others, even the law, Satrapi is bold and honest, which are admirable traits— I often found myself wondering how I would have reacted if I were in her shoes. 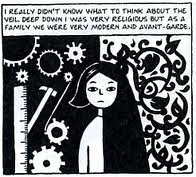 Satrapi’s representation of herself in this novel has a universal appeal because she is unflinchingly honest and remains true to herself, despite the obstacles such blunt honesty creates. Satrapi does not necessarily prescribe to the tenants of Islam; rather, she thinks critically about her views and how she feels, preferring to think for herself. This stems from the way her parents chose to raise her, providing books and encouraging her to read them and form her own opinions. There are many mentions of communism and Karl Marx in this novel, referring to the books she has read and her radical, communist family members who rebel against the Islamic regime. Providing such a perspective of an Iranian family is very different, intense, and fascinating.

The way in which Persepolis deals with difficult subject matter is another reason why this novel is so appealing, using humor at times despite the troubled period during which she grew up. This novel portrays a child and then a young adult frustrated with the limitations that life in Iran imposes on her. Satrapi’s reactions to certain things are indeed funny but also shed insight into Satrapi’s sense of entrapment and inability to fully be herself while in Iran. 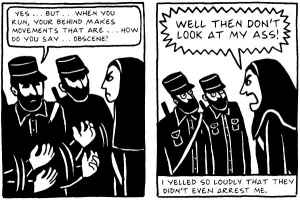 Between dealing with controversial political issues, war, and a rather naïve but delightful protagonist who doesn’t know any better than to be true to herself at all costs, I believe this graphic novel has proved its literary merit, rightfully earning its place as one of the best works of fiction in this decade. In the ten years since it has been written, it has grown rapidly in popularity and is distributed around the world. Compared to classic literature, this graphic novel has done something entirely different—it has achieved international relevance rather quickly and, unlike the classics which are valuable but have a reputation for being stuffy, is immediately engaging and would appeal to almost anyone.Another unique aspect of Satrapi’s graphic novel is her use of interiority—a term that is often used in literary theory and refers to the way in which a work focuses on what the protagonist is thinking and how they feel. The concept of interiority became very important during the 18th century, which revolutionized literature and is a topic that scholars still write about and discuss. Satrapi utilizes interiority to help the reader become a part of her world; she makes the reader feel invested in Satrapi’s life, especially through her charming young character.