How I Met Your Mother: Final Season Speculations

September 23rd is the date. The beginning of the end. The ninth and final season of, CBS’s comedy/ drama hit, How I Met Your Mother premieres on this day. Carter Bays and Craig Thomas have revealed the format will be over one weekend- Barney and Robin’s wedding. This will include flash-forwards and flashbacks to fill in gaps of the story and crucial elements in the story of Ted and the Mother. But what is to be expected from this season? What plot twists are the creators going to give the characters? These are my speculations.

We know many plot lines from season eight link straight into the ninth season of How I Met Your Mother. The Lily- Marshall job crisis is one of these. We know Marshall has accepted his position as a judge and Lily has decided to move to Rome to work with the captain for a year, and that these two career prospects clash. This is one plot line that will have to be resolved in season nine. One of the first photos from the set shows Marshall on a plane with guest star, Sherri Shepherd, but we don’t know if this is on the way to Rome or on the way back, there is also no sign of Lily with him. What this means we don’t know yet? But possibly Marshall delays telling Lily until he is in Rome, or maybe she goes on ahead of him and he is visiting?

Another plot point that has to be resolved is the Ted and Robin love story. We know Ted has still had feelings for Robin in season eight, and that they may not be entirely gone. These feelings need to be resolved between Robin and him for the wedding to go smoothly, which as we know it doesn’t. There is also the gift of the locket to be resolved. How will this impact on Robin, what will her reaction be about this? Hopefully this will all be resolved early in the season so it gives way for more fresh content for the viewers.

In an interview with TV Fanatic, Bays and Thomas revealed two big clues about the next season. The first was that in the premiere episode someone will meet the mother, but it wouldn’t be Ted. From the most recent promo it is revealed that it is Lily who meets her and, let’s just say, it doesn’t sound like they hit it off very well. The other big reveal was decided on the spot by Bays and Thomas. They revealed that during the wedding someone will die. No hints as to who, but it could be family of one of the main cast or even one of the guest stars reappearing, there is no way for us to know, I guess we will have to tune in to find out.

In an Entertainment & Stars article it is revealed about three new characters that are entering into this new season. They will all arrive at the wedding and lead to conflicts and comedic situations with some of the characters. One of them, Barney’s assistant Grace, seems set to tempt Barney back into his bachelor ways and away from Robin leading to a possible conflict at the wedding. The others don’t have much known about them except that one’s name is Knight Templar and the other’s is Sophia, who could lead to the possibility of more Robin Sparkles as she is Robin’s college roommate.

The jokes in How I Met Your Mother that have continued throughout the seasons will most likely be reappearing in this final season. We still don’t know what Barney’s job is a joke that has been going on since season 1. Maybe this season we will finally find out, though the odds are Barney will just say “please”. The creators have revealed that there is one episode that is intercut over the course of one slap bringing in another Slap Bet episode. But who will do the slapping, will the slap be passed on or will Marshall keep it for himself? I guess we will have to see. Other jokes that can come into the final season are the best friend debate between Marshall and Barney, most likely with Barney starting the debate.

Neil Patrick Harris revealed at this year’s San Diego Comic Con that Barney’s brother, James, will be returning in the ninth season but divorced. This is the first in what will be a lineup of guest stars showing in this final season. The creators have hinted that they are trying to get back as many characters that have been seen before, this means that no doubt we will see reoccurring characters such as Ranjit, Carl and Wendy again. Not only this but there is a fair chance we will see all the main characters families again. Bob Odenkirk (Breaking Bad) could also return as Arthur Hobbs, Barney’s boss, and lead into more scenes about Arthur’s love of his beloved Tugboat. Other possibilities could include, but aren’t limited too, any of Barney’s ex-lovers as this could lead to awkward situations with Robin running into them at the wedding or in the flashbacks. 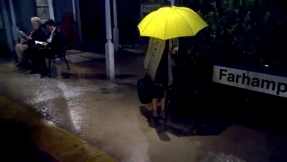 The plot aspect that the audience wants to see most in this new season of How I Met Your Mother is the relationship between the Mother (Cristin Milioti) and Ted, especially after last season’s big reveal. As the season is going to have flash-forwards, we assume that we will see more of this relationship. We have already seen a flash-forward of Ted with one of his future kids, and we hope that this season brings more of those bits into the show. Presumably we will see flashes of Ted’s wedding intercut throughout this next season, maybe even intercut with Barney and Robin’s which I presume will be the final episodes of How I Met Your Mother. Also the audience would want to see part of the time they were dating, maybe their first date and these could be possible flashes throughout the season.

All fans of this great TV show want to see is what happens to these characters in this final season. We want to see Ted happy and win the girl of his dreams. We want to see Barney and Robin’s happy marriage and Marshall and Lily’s life with their kids. We are invested in their stories. For the past eight years we have watched them face triumphs and tragic times. All we want is to find out what happens to them in the final chapter of how Ted meets the mother of his children. We can’t wait for this final season. It’s going to be legen…wait for it….dary! Legendary!