In Showtime’s hit sitcom Episodes‘ first scene, a marriage is destroyed, revelations spill out onto the screen, and a car crash injures Friends star Matt LeBlanc. From this hysterical and kinetic opening, this series establishes itself as a refreshing, groundbreaking, and conniving invasion of the sitcom genre’s personal space. Normally, the genre is forced to present such drudgery as Two and a Half Men, Dads, Men at Work, and The Big Bang Theory. Despite captivating the masses with each new season, these shows refuse to sink their teeth into anything original or intellectually stimulating. They, guided by focus-group pandering and generic studio material, never deliver anything exciting or original. Recycling old plot-lines, character arcs, and jokes, they get kicked to the curb by pop-culture and critical analysis.

Thankfully, Episodes has come along to show them how it’s done. With its starry-eyed premise, crude humour, and realistic outlook, the snappy sitcom contains more honesty and integrity in one episode than Two and Half Men does in its whopping eleven (and counting) series run. With season 3 hitting its strides, I went back over the first two seasons to deconstruct and reconstruct its many engaging elements. Dividing this article into sitcom’s well-known structural facets, this may, hopefully, convince people to tune-in to this enlightening show. 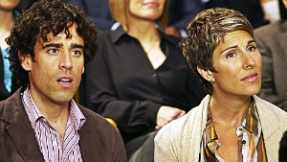 After the car crash sequence, the story travels back six months. The show follows a married couple, Shaun (Stephen Mangan) and Beverley (Tamsin Greig) Lincoln, after their immense BAFTA wins. With their sitcom Liman’s Boys becoming a world-wide smash hit, this writing, directing, and producing duo have become British TV icons. During the after party, they are approached by Hollywood network executive and media mogul Merc Lapidus (John Pankow).

Lapidus, driven by ego, rudeness, and excess, offers the Lincolns a prestigious career opportunity in Los Angeles. Right off the bat, Episodes establishes a kooky yet witty culture clash. Merc, talking in a caricatured British/Australian accent whilst around the Lincolns, becomes a slimy and irritable antagonist. This story arc, based around the Lincolns moving from rain-drenched London to Brightly-saturated LA, becomes a treasured aspect of this skin-wrinkling series. Adjusting awkwardly to studio-speak and hearsay, the couple steadily relinquish control of their beloved series.

Showcasing Hollywood and sitcom production’s darkest shades, the show’s wink-and-nudge story-lines become hysterically absurd. With the show transforming from Boarding school-set dramedy to wacky Ice Hockey-related sitcom trash, the Lincolns struggle to keep their heads above water. In the second episode, after cocky yet charismatic TV star Matt LeBlanc’s introduction, devilishly crude personalities and revelations arise. In fact, season 1 etches itself into the consciousness thanks to its raw edginess and surprising turns. Thanks to alluring people, tempting offers, and material objects, this couple, by season 1’s end, face divorce and the studio’s axe.

Season 2, however, delves into the all-important, and sometimes scandalous, relationships. Driving the heartless yet blackly reflexive narrative, debaucherous activity and temptations threaten to unravel several uneasy alliances. Despite its reflective structure, this sitcom revels in secrets, lies, and sitcom-esque intricacies. Providing this complicated pairing some love interests, awkward moments, and lingering feelings, the show deliberates on the good, bad, and ugly sides of all types of professional and personal relationships. 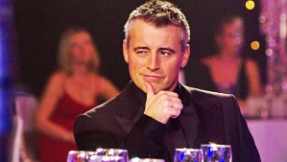 Obviously, sitcoms rest on their actors’ charisma, likeability, and comedic timing. Certain actors can save otherwise atrocious sitcoms. For example, Patrick Warburton has lifted Rules of Engagement out of the forgettable-comedy-TV doldrums throughout its lengthy run. Here, LeBlanc waltz’s into this show with his cocky attitude and enlightening reputation in tow. Immediately, this version of LeBlanc lambasts his ‘nice-guy’ persona.

This foul-mouthed celebrity indulges in the cliched tinsel-town lifestyle. Calling big-shots and aficionados about his new restaurant, his begrudging nature and brash tone overshadow the lead characters’ motivations. Immediately poking holes in the Lincolns’ hit sitcom, the cynical superstar isn’t the series creators’ optimum choice. With LeBlanc depicted as a womanising, two-faced sociopath, the show thrives on Hollywood’s cruel identity and its inhabitants’ socially-inept personalities.

With Friends and Joey being the gigantic elephants in the room, LeBlanc comments on his own overwhelming wealth and opportunistic persona. With grey hair and a slightly bloated stomach, this LeBlanc is presented as a celebrity who lives for excess, deceit, and temptation. Throughout season 1, LeBlanc becomes an intriguing celebrity for the series’ creators to bounce off of. With Beverly’s prejudices getting in her way, Shaun is able to befriend LeBlanc. Shaun’s sarcasm and LeBlanc’s brashness kick-start several enthralling episodes throughout season 1.

However, in season 2, LeBlanc’s inane mistakes push Shaun, Merc, and himself over the edge. However, like LeBlanc, the surrounding characters also hop on roller-coaster rides of emotional torment and heartache. Carol (Kathleen Rose Perkins) becomes the Lincoln’s shining light in this sickly-sweet-yet-pitch-black universe. Lying through her teeth, the ‘truth’ is continually sugar-coated by Carol’s shiny grin. However, due to complex obstacles, her overwrought frustration reaches the surface by season 1 and 2’s end. Holding onto secrets with suffocating force, her bright persona blankets immense anger and pain.

Unlike many sitcoms, Episodes provides several wacky yet humanistic and flawed characters. Despite the egos, personas, and insults, these characters are driven by thrills, sex, war, love, and chaos. With two strangers immersed into this gratuitous world, this particular hook provides two avatars for audience members to empathise with. We, like the Lincolns, settle uncomfortably into this cynical, slimy, and gratuitous version of Hollywood and the studio system. 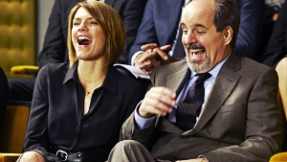 Obviously, sitcom humour contains drastic differences to movie or stand-up comedic hijinks. With sitcoms, nearly every line of dialogue or oafish pratfall is designed to illicit a raucous laugh. With studio audience or laugh tracks guiding each joke, scene, episode, and season, the characters behave differently to those of other entertainment mediums.

No doubt, the characters from The Big Bang Theory would have vastly different speech patterns to those of a darkly comedic Aaron Sorkin creation. With humour vital to a sitcom’s ever-lasting success, the material and acting must deliver that extra ‘oomph’ needed to make a pratfall or one-liner successful. Thankfully, Episodes, with the added incentive of not having a laugh track, is created by well-minded creators, writers, and directors.

With this show based heavily on one actor’s previous successes, the show needed, right off the bat, to delve into LeBlanc’s hidden character traits. What does he think of the present day studio system? What does he think about his loyal followers? And, most importantly, why is he so startlingly different to Joey? Naturally, the show takes several left turns along the way. In each episode, the characters reflect upon their own and each other’s career choices and tabloid-media-induced issues. With LeBlanc’s personality and actions getting in the Lincolns’ way, he looks back on is post-Friends life. Divorce, sex, and booze guzzling prove to be kryptonite for this mega-star.

Calling up his Friends co-stars to ask for cameo appearances on his new sitcom, many sequences display LeBlanc’s strange tendencies, irritating behaviour, and larger-than-life presence. With LeBlanc making fun of Joey (a critical and commercial flop lasting a mere two seasons), he focuses on life’s glowing yet superficial positives and disastrous negatives. In addition, the studio system’s absurdities throw the Lincolns off their game. With their show transitioning drastically from British comedy gold to forgettable American trash, this culture clash scenario provides many big laughs. With diets, bizarre egos, and expensive accessories dictating their lives, the Lincolns become sympathetic and hilariously unfortunate characters.

With its engaging characters, intriguing stories, cynical yet realistic outlook, and hysterically absurd humour, Episodes is an entertaining, nastily relevant, and tasty sitcom. Stripped of the genre’s tiresome cliches and irritating tone, the series pokes fun at popular sitcoms, Hollywood, and the public and media’s perceptions of celebrity. Into its third season, Episodes is establishing itself as an intelligent and raucous deconstruction of TV programming and the First World. Most sitcoms don’t have the guile to delve into interesting issues or even truly deceitful behaviour. Thankfully, Episodes swings for the fences and succeeds.