Is The Big Bang Theory the show that hates you?

The interwebs are all ablaze with irate ‘geeks’ claiming to be offended by the most recent Big Bang Theory promos. Female comic readers are angry about the stereotyping of their gender in relation to comics shops specifically and ‘geekdom’ in general.

Get over it people! First off, when did ‘owning that word’ become the norm? Geek is not a positive word. Geek is a pejorative term for circus freak. Reclaiming a word that is used to reduce you is a fairly foolish thing to do anyway, but this furor over something as silly as a TV sitcom is even more foolish.

Complaining about a stereotype used in a medium where stereotypes are their stock-in-trade is a waste of effort. The Beverly Hillbillies were not aimed at, nor did it offend brainless hicks, and complaining about this show portraying you in a negative way (or at least negative in your opinion—after all, one person’s acceptable behavior is another person’s mortal sin) is not something you should waste your time on. In our ‘civilized’ society, issues on TV are what we get angry about instead of important issues in the real world. Angry about the portrayal of a group or issue on TV? Get off the message boards and write the network or the producers. It is their right to produce it though and your right to change the channel. 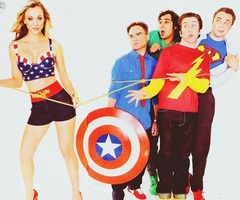 One valid point in all this hoopla about the show last week is that women seemed to be more negatively treated (or again, perceived as negative by some) and marginalized by the very thing they love. That is true; women ARE the butt of the joke perhaps a bit more often than the men but that would also be a debatable point. The female characters in the show give as good as they get and as a viewer of the show, I can honestly say that the girls are the high point for me. Penny, Amy and Bernadette are the funniest part of the cast and have kept me watching the show. They are all smart, funny and quick witted, something that the guys often are not. This episode specifically, everyone is on fairly equal ground by the end and all look and act fairly foolish.

One thing to consider is the fact that all of these characters are caricatures and stereotypes by design. BBT is a sitcom and designed to have as broad an appeal as possible within the constraints of the premise. Without the broad generalization of the people and types, the humor is lost on most of the potential audience. I should also point out that the very same people that are complaining now, both men and women, are the ones that were laughing at the show last week (and likely next week as well). Just because a particular joke has struck you as attacking you personally does not allow you to be selectively indignant now. Do you laugh when they pick on Raj’s ethnicity or Leonard’s height and dietary issues? Do you enjoy laughing at Amy’s social awkwardness? If you answered yes to those and are angry about the current stereotyping then you should probably lock yourself in a room and not have contact with the rest of the world.

As humans we laugh at each other and ourselves. Is it right? Maybe, maybe not, but it IS the way we are. For every person that finds the jokes about Sheldon’s OCD funny, there are a great many people feeling bad or hurt by the joke and have to deal with those issue daily. Should we stop telling those jokes then? No we should not. Humor is mean much of the time but you are not mean for laughing and you are not a jerk or a whiner for getting upset either. Do I feel for the people offended by this? Yes, but I am also one of the people laughing at the above issues. Because the characters are fictional I think that it is OK. If these were real people that where treated that way then we need to listened and empathized with them. If a joke doesn’t offend at least a few people in the audience it probably is not very funny.

Posted on Jan 12, 2013 by
Taylor Ramsey
While I quietly wait for a really good excuse to go on an interstate mayhem spree, I read comics and watch movies. While I do the "writing" here, my wife makes it readable.
Follow