Skinning the Wolves: James O’Barr Returns to the Crow 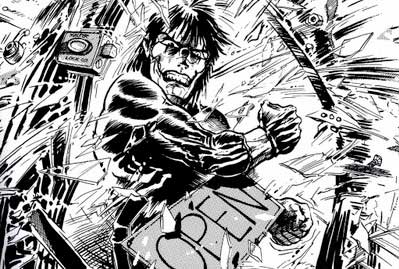 IDW announced a new Crow mini-series and it came with some exciting news for fans of the character. James O’Barr, creator of the character, will return as writer and artist for this run. O’Barr created The Crow back in 1989 for Caliber Comics, and has since let others write the character in recent years. 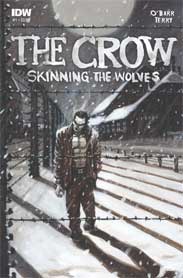 The mini series will be titled The Crow: Skinning the Wolves. It takes place in 1945 in a Nazi concentration camp. According to a press release from IDW, Skinning the Wolves “investigates a world where the dark harbinger of vengeance is dispatched in response to one of history’s greatest atrocities and the ultimate evil that perpetrated it.” Co-artist Jim Terry will be joining O’Barr on the project as well. O’Barr had this to say about the project:

“This is a story I’ve had planned for ages; 20 years maybe. It’s a tough tightrope to walk, using a concentration camp as a setting for a story, but I took care in not exploiting the situation for entertainment purposes. I did layouts and a rough story outline, but got sidetracked with the increasing popularity of the original film and graphic novel of The Crow and never found the time to finish it.”

He continued to speak about Jim Terry:

“I met Jim Terry a few years ago and was really truly impressed with his Eisner-esque style and thought it would be perfect for him. He’s gone above and beyond my expectations and I’m very proud of him and this book.”

The first issue is due out sometime in December of this year, and will be planned as a three-issue mini-series.

Posted on Nov 12, 2012 by
Mike G
I'm an absolute film buff, and love writing about movies and TV. I'm particularly a fan of Asian cinema and hope to introduce people to truly great films from that region.
Follow