Four Reasons Why You Should Know and Appreciate Jean Arthur 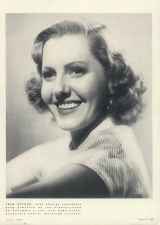 Cary Grant, James Stewart, Gary Cooper. Long departed Hollywood stars with their cinematic presence preserved with a wealth of adoring fans. They share the same connection, co-starring with Jean Arthur. Despite Arthur appearing with Grant, Stewart and Cooper amongst others she seems unappreciated within the wider spectrum of Hollywood’s Golden Age.

So who is Jean Arthur? Breaking into the film industry in 1923 after a teenage modelling career, Arthur had high hopes. However lengthy periods in small scale features barely made an impression, she gave up on Hollywood and returned to New York. Yet Hollywood once more came calling again via Columbia Pictures where Arthur received her breakthrough role in The Whole Town’s Talking (1935). Arthur then went from strength to strength starring in Oscar winning pictures such as Mr Deeds Goes To Town (1936) and You Can’t Take It With You (1938).

In spite of Arthur’s growing success, arguably it was small scale compared to her counterparts. Retiring from Hollywood after Shane (1953), beforehand she had refusing a number of film roles which landed her in regular trouble with Columbia Pictures. The filmography Arthur built up falls behind her former pears (46 out of her 95 features are silent films most of which are lost or destroyed) contributing to her unappreciated status.

Though this is undeserved. With her enchanting voice, vigorous performances and sustainable screen chemistry, Jean Arthur had and was capable of being recognized as a major player in Hollywood’s Golden Age. Here are four reasons why.

Despite Arthur describing her voice as “a foghorn” out of insecurity, to many it became a distinctive trademark to her screen persona. It gave Arthur an edge depending on the characters she played. If audiences study The Whole Town’s Talking, Arthur’s enchanting vocals added attitude to her self-assured character. This is evident immediately from her opening scene.

Arthur’s comic precision in her opening lines draws audiences into her character. It is a testament to Arthur’s vocal advantages charming the audience. Every moment is one grasping for immediate attention which also worked for her more dramatic roles.

In the dramatic climax of Mr Deeds Goes to Town, Bennett sees her amoral ways to defend Deeds from ridicule. Gasping in sheer desperation by pouring her pleas, Arthur had the capability to direct dialogue into raw emotional power. From a personal perspective this film’s climax had atmosphere because Arthur, with her distinctive voice, reached emotional ranges exactly when it was needed.

3. The bad girl with a heart of gold

Though by no means a unique trait in cinematic roles, Arthur’s portrayal of tough women with ultimately sympathetic cores can be seen across a number of her films. Most prominently in Mr Smith Goes To Washington (1939) as hardened political security Clarissa Saunders. In this Capracorn classic (referring to the social and/or political optimism of Frank Capra’s films) young idealistic politician Jefferson Smith learns the immorality and corruption within the Senate. Long immersed to these qualities is Clarissa, who playfully mocks Smith’s idealism whilst secretly admiring him. This is best illustrated when Clarissa explains how to propose a Senate bill.

How to Propose a Bill according to Jean Arthur

Giving Smith a stern lesson, Arthur manages to convey a underlining element of protectiveness in Clarissa. An inkling of a nurturing instinct that later becomes evident as Smith heads towards triumph. Arthur’s conviction is so natural that on my part its remote from acting.

In a more light hearted feature, The Ex – Mrs Bradford (1936), Paula (Arthur) reunites with her Ex-Husband Brad in a loving scene before tricking him into receiving a subpoena. Clearly Paula has a mean streak yet her good natured side soon appears. Brad leads a murder-mystery case becoming embroiled with scheming men and women. Paula soon lends herself as an amateur stealth assisting Brad towards solving the case. Her qualities warms audiences to Paula’s personality as she becomes equally attractive and comical.

Frank Capra referred to Jean Arthur as an actress who “could do anything, could express love or hate or anything else”. This was proven time and time again as Arthur engaged emotional realms at ease. In the testosterone environment of Only Angels Have Wings (1939) Bonnie Lee (Arthur) had to quickly adapt following an unexpected death.

Having previously been in complete despair Bonnie assimilated into the harsh realities of cargo flying headed by Geoff Carter (Cary Grant). Just when you think Bonnie has truly assimilated herself Carter asks “who’s Charlie?” which to Bonnie’s clear sorrow but gritty determination denies the recently deceased’s existence. With Only Angels Have Wings audiences followed Bonnie’s experiences so Arthur had the task of emoting a traumatic, on the edge lifestyle, succeeding with gusto due to her performance’s variety of emotions.

This could be witnessed in an earlier feature, the melodrama Whirlpool (1934). Arthur played Sandra Morrison who reunites with her biological Father years after believing he died. Buck (Jack Holt) had only faked his death to give his Wife (Sandra’s Mother) a better chance at life. Their relationship blossoms on the underlying factor of Buck’s criminal dealings which builds to a melodramatic finale. Vainly attempting to save Buck’s life, Arthur conveyed suffering in Sandra’s plight. This escalated to Whirlpool‘s closing moments when Sandra listened to reports of Buck’s demise, her Mother’s dismissive attitude unbeknown to the irony involved. The final close-up of Sandra looking out and losing herself towards the skyline. It made for a emotionally provoking end to Whirlpool thanks to Arthur expressing a silent strength internalized by grief.

As noted at the beginning of this article Arthur had co-starred with numerous leading men. By her own admission Arthur’s best screen chemistry was with Gary Cooper stating “He was so terrific-looking, and so easy to work with”. Reflecting on their work together it’s easy to see Arthur’s reminiscent carefree nature.

With their chemistry surging it’s hard not to be charmed by this candid moment with the endearing side Arthur unravels within Bennett’s attraction for Deeds. One can notice the carefree atmosphere this scene contains which adds to Arthur and Cooper’s chemistry. This did not diminish in their second and final film appearance together in The Plainsman (1937).

Their clash of personalities along with variations of feelings towards each other firmly established a past history which The Plainsman explored. This comes down to chemistry, a vivaciously that is a part of the dramatic and comical nature of both Mr Deeds Goes To Town and The Plainsman advanced in part by Jean Arthur’s extraordinary talent.

Arthur also showed this with her collaborations with Cary Grant. In Only Angels Have Wings, Bonnie and Geoff slowly bond amongst their clash of personalities as shown in this scene.

In terms of performance Arthur and Grant bounce off one another. The whimsical nature of Bonnie, concealing a schoolgirl crush for Geoff while he overbears his masculinity, trying to hide his true feelings. The continuation of their relationship as it continues to clash and develop made for quality drama. Their worthwhile chemistry had similar results in The Talk of the Town (1942).

Those who are fond of Classic Hollywood cinema should defiantly take time to familiarize themselves with Jean Arthur. There is always something enjoyable in Arthur’s performances. Performances which blossom with vigor that audiences can truly appreciate.

Posted on Jul 27, 2013 by
Ryan Errington
Contributing writer for The Artifice. I have a deep interest in films, television and the arts.
Follow