When Paul Verhoeven (Total Recall, Starship Troopers) was handed the script to RoboCop (1987), like other Hollywood heavyweights, he initially cast it aside. The premise of the movie seemed ridiculous. When his wife rescued the pages, she continued to the end and convinced him to give it another chance, on the basis of a rich vein of allegories and metaphors running throughout.

Edward Neumeier’s story follows Alex J. Murphy, a newly-instated police officer in a dystopian Detroit, overrun with gang warfare and controlled by international conglomerate , OmniCorp (OCP). Breaking down society’s foundations and exposing an underbelly swollen with cultural hegemony, RoboCop sees its protagonist brought back from the dead as a crime-fighting cyborg unit – a crowning jewel in the mixed history of OCP. As the events unfold, what starts out as a mindless sci-fi/action film proves to be an unsettling satiric of our community’s decaying civility and the rise of corporate power.

The film was a hit, regaining its budget four times over, spawning two sequels and a short-lived television series. No spin-off could replicate the success of the original, with the cyborg short-circuiting in the early 2000s. The character of Murphy was sent to the scrapyard and hasn’t been seen since.

The Right Man for the Job

In 2005, Sony announced that a RoboCop reboot was on the cards. Disappointingly, fans of the series had to wait three years for something concrete to leak. Citing that the character needed to mature (like a fine wine… or cheese) a little longer, MGM revealed in 2008 that Darren Aronofsky (Requiem for a Dream) would helm the project. While this seemed an indication that RoboCop was ready for action, the synthetic humanoid was unable to claw its way out of development hell. Aronofsky found himself unable to commit, turning his attention to Black Swan and the upcoming, Noah.

In March 2011, the studio confirmed José Padilha as director, a decision that may prove to be a masterstroke for the longevity and integrity of the RoboCop series.

A native of Rio de Janeiro, Padilha has oft been regarded as a documentarian of his homeland. His body of work boasts three critically acclaimed documentaries: Bus 174; Garapa; and Secrets of the Tribe, which premiered at the 2010 Sundance Film Festival.

His transition into contemporary cinema is somewhat profound and particularly well-received; not only in Brazil, but globally. Elite Squad took home the coveted Golden Bear at the 2008 Berlin Film Festival, while the sequel was the Brazilian entry for Best Foreign Film at the Oscars. It is also the highest-grossing film in Brazilian box-office history, ousting Avatar for the top-spot.

Having gained a reputable name for himself with Bus 174, Padilha teamed up with fellow screenwriter Bráulio Mantovani (City of God) a second time to adapt André Batista’s novel, Elite de Tropa (Elite Squad). The film is centered around the Special Police Operation Battalion (BOPE), an infiltration unit specifically trained for urban warfare in Brazil’s crime-ridden slums – the favelas. The sequel, Elite Squad: The Enemy Within, tackles many of the same issues raised in the first, as well as the state of the Brazilian prison system and political leaders.

It is here that you can begin to feel optimistic for his interpretation of RoboCop.

Much like City of God, Elite Squad situates itself squarely in the favelas of Rio de Janeiro. An overwhelming drug problem is rife in the slums and corrupt police officials turn the blind eye for a favorable cash sum. The Enemy Within expands further and examines how the problem twists through the police network and further afield.

Drawing on a knowledge of politics from his studies in Brazil, Padilha’s work is insightful and well-informed. His writing exposes the country’s leaders as very human individuals, with very human desires. His experiences with the hungry and poverty-stricken are conveyed unerringly, with large portions of the film feeling like a documentary rather than fiction. By experiencing his film, you are (in turn) experiencing a living hell; a society so far removed from democracy it feels like a modern-day dystopia.

This ultra-realistic approach to film-making may have been the reason he was given his latest assignment, with the Dark Knight trilogy and Dredd signifying Hollywood’s current love affair with grit and realism.

It is strange that the favelas of today draw comparisons to Neumeier’s world of tomorrow, but juxtaposing Elite Squad with RoboCop builds a bridge that would be better served torn to the ground.

In the slums, drug-dealers lead the community through manipulation and fear. This is only of secondary concern compared to police brutality and corruption. One scene in Elite Squad places a newly-recruited policeman in a sociology lecture. His classmates engage in a heated discussion on oppression from the local law enforcement, while he argues that the media and government are the leading cause for this depiction. A prime example of a Marxist cultural hegemony.

On various occasions, the police officer’s romantic interest refers to drug-dealers as ‘socially aware’. Whilst being violent, the common people look to them for help; they see them as more suited leaders than their dysfunctional government. When criminals are seen as the leading figures in society, can democracy prevail? Or does this confirm that Rio de Janeiro is the modern-day equivalent to Verhoeven’s Detroit?

These notions are duly present in RoboCop. The organization, OmniCorp, represents a modern-day government. Dick Jones (Ronny Cox) resorts to murder, intimidation and deceit to influence the ruling company, while his rival (responsible for Murphy’s reincarnation) seeks only fame and wealth. Similarly to Rio’s higher-ranking officials in Elite Squad: The Enemy Within, the company appears to act in society’s best interest, but its employees are guided by only personal gain and the lure of success.

Kurtwood Smith’s character, Boddicker, represents the broken society at ground-level. Like the Brazilian drug lords, his actions are despicable and coarse. Though, even as a notorious ‘cop-killer’, he manages to maintain a loyal following. The police, uncorrupted, are still failing to protect the civilians they serve, and rely on the radical introduction of RoboCop to turn the tide in the war against chaos and disorder; much like Captain Nascimento and the BOPE of Elite Squad. Both hero’s are unshakeable in their approach to law enforcement, but inspiration from Nascimento’s rigid values, tenacity and imperfections could see Padilha’s Murphy grounded with a much more humanistic style than the original.

To RoboCop (2014), Padilha brings with him director of photography, Lula Carvalho. Boasting a CV that includes City of God and Elite Squad 1 and 2, it is easy to get an idea of how the reboot will look and feel.

Carvalho’s cinematography has often been described as ‘music-video’ like, utilizing quick cuts, close-ups and a saturated color palette. Reds and oranges pop out of the screen to make blood-splatter (something Padilha does not shy away from) a grotesque joy to behold. His camerawork is inventive and unique; a handheld approach gives his art the feel of a documentary, albeit swinging from artistic to distracting in some cases. With these two pairing up for RoboCop, audiences can rest assured. No matter the outcome, the film will at least look fantastic.

However, it seems pre-production proved to be something of a stumbling block. Confiding in fellow director and friend, Fernando Meirelles (City of God), Padilha confirmed that the process was an unmitigated struggle. One can see why. With Elite Squad, he was working with his own creation; his own script and ideas. RoboCop has seen a screenplay thrust into his hands by three separate screenwriters and constant meddling from the studio. The Brazilian has said that “for every ten ideas he has, nine are cut.”

This is not uncommon with a big-budget blockbuster, particularly when a relatively raw talent heads proceedings.

Yet Padilha is still confident of a successful outcome for the project. “The film will be good,” he told Meirelles, “but I do not want to do this again.”

Though the accuracy of these quotes is questionable, when he was quizzed on the matter he simply said, “we deal with those difficulties with coolness and familiarity.” Trouble was definitely brewing behind closed doors.

Most recently, in an interview with VH1, RoboCop star Abbie Cornish had nothing but praise for the filmmaker. She mentioned that Padilha not only thought the film would kick ass – but would be also go down as a classic. His confidence has certainly risen since the boardroom mishaps of pre-production. 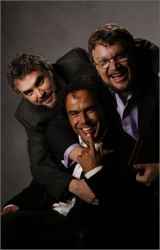 Padilha follows in a long line of Spanish-speaking directors crossing the border into Hollywood. The most notable to do so are Mexican filmmakers; Guillermo del Toro, Alfonso Cuarón and Alejandro González Iñárritu. Like Padilha, these three heavyweights nurtured and perfected their talents in their native country. Del Toro found success with Cronos and The Devil’s Backbone, before bursting into the American film industry with Blade 2 and Hellboy.

Similarly, Cuarón made Love in the Time of Hysteria and Y Tu Mamá También, before taking on the third Harry Potter film and the apocalyptic thriller, Children of Men.

Alejandro González Iñárritu broke onto our screens with the controversial Babel in 2006, but had already achieved success in his home country with Amores Perros. His 2010 picture, Biutiful, made waves at the Oscars, earning a nomination for lead actor (and previous winner), Javier Bardem.

The film business in Latin America has spiked. Audiences viewing local releases around the region have risen drastically, meaning locally-produced work is reaching wider viewers and competing in the market against its northern competitors. Its recognition at the most prestigious film festival is almost certainly a result of such a boom. The 2012 Cannes Film Festival featured a strong influx of Latin American flair. Argentina, in particular, was well-represented. Films like Pablo Trapero’s Elefante Blanco, Alejandro Fadel’s Los Salvajes and Gonzalo Tobal’s Villegas went down well with their respective crowd, avoiding the onslaught of boos Nicolas Winding Refn’s Only God Forgives received.

Joining Padilha in spearheading the next generation of young Hispanic talent to grace American soil, are rookie horror directors Fede Alvarez (Evil Dead) and Andrés Muschietti (Mama), though neither found success in their native land. This places him as the clear front-runner to take the baton from the previous generation.

Padilha’s intellectual insight into political workings will no doubt ground the dystopian action flick with well-informed realism. His action sequences have been unflinching and raw in previous endeavors, something many hope will spill into his remake. It proved advantageous for the crowd-pleasing Dredd reboot; a film that will inevitably draw comparisons with RoboCop upon release.

An exploration of his earlier work will give audiences a taste of what is to come. A futuristic hell with as much style and sizzle as his nation’s football (soccer) team, RoboCop could very well defy critics and pessimists and confirm Padilha’s place as the pinnacle of Latin American imports into the American film industry.

Posted on Jun 9, 2013 by
Dale Barham
A self-proclaimed 'cinephile' who spends too much time obsessing over an out-of-control film collection, I am a lover of all things imaginative.
Follow