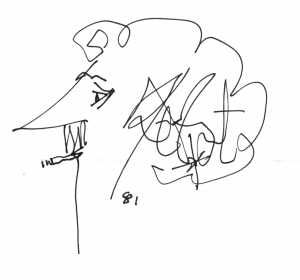 Not many authors -especially well-respected authors- write meta-fiction, fiction that uses literary techniques to draw attention to itself as a work of art. Vonnegut has changed this with his works Slaughterhouse-Five and Breakfast of Champions, in which he appears as a character in both, inextricably linking these novels together.

“And I sat there in the cocktail lounge of the new Holiday Inn, watching Dwayne Hoover stare into the bosom of the shirt of Kilgore Trout. I was wearing a bracelet which looked like this…” (Breakfast of Champions 253). After this quote, Vonnegut draws a picture for us, further pointing out that the novel, and all of the events in it, have been drawn up in his own mind. Having drawings placed in between the text further alerts us to the fact that we’re reading a fictionalized novel; it draws attention to itself, as meta-fiction often does.

“I was really sick for a while, though. I sat there in the cocktail lounge of my own invention, and I stared through my leaks at a white cocktail waitress of my own invention. I named her Bonnie MacMahon” (BOC 199). Vonnegut goes as far as to italicize the word ‘leaks’, highlighting its importance here. Earlier in the novel, and even in God Bless You, Mr. Rosewater, Vonnegut explained that ‘leaks’ are simply Kilgore Trout’s word for glass. Trout believes, half-heartedly, half-jokingly, that looking through a leak allows you to see into another universe. Vonnegut stresses here that he is looking through leaks, and the reader can assume he means he’s using his glasses to look at this separate universe, a universe of his own creation. Staring at and interacting with characters ‘of his own invention’ may remind us of something a schizophrenic might do. In fact, the quote mentioning the idea of ‘leaks’ comes directly after the paragraph where Vonnegut admits to possibly suffering from schizophrenia.

Vonnegut’s words on schizophrenia are these: “I did not and do not know for certain that I have that disease. This much I knew and know: I was making myself hideously uncomfortable by not narrowing my attention to details of life which were immediately important, and by refusing to believe what my neighbors believed. I am better now. Word of honor: I am better now” (BOC 198). Even though he states this, we know he isn’t completely better. Pages later, he admits to downing pills to hold back depression. “There in the cocktail lounge, I took a white pill which a doctor said I could take in moderation, two a day, in order not to feel blue” (BOC 254). Clearly, Vonnegut isn’t to be completely trusted, as contradictions pop out throughout his texts; it is a dialogic text, after all. Vonnegut isn’t sure of the answers to the questions he’s presenting, so it’s only natural that he’d contradict himself in searching for an answer.

Vonnegut goes farther than simply inserting himself as a character in the story. He goes as far as to tell us that he controls the characters and events within the story. “There in the cocktail lounge, I gave Dwayne Hoover credit for having taken a course in speed-reading at night at the Young Men’s Christian Association” (BOC 254). At one point, Vonnegut even acknowledges that he is the god of this universe, the universe within his novel. “I was on par with the Creator of the Universe there in the dark in the cocktail lounge. I shrunk the Universe to a ball exactly one light-year in diameter. I had it explode. I had it disperse itself again. Ask me a question, any question” (BOC 205). Vonnegut’s declaration that he’s the master of this story necessitates that he should not be surprised by anything that happens in it, since he’s created it all. He compares himself to God, and has seemingly revoked the free will of his characters because of his existence as their God. This parallel to God lines up with one of Vonnegut’s many themes of a lack of free will, of the idea that humans are simple machines all predestined to act in certain ways by their ‘Creator’.

Somehow, Rabo Karabekian surprises Vonnegut with a speech inspired by his artwork. “Karabekian slid off his barstool so he could face all those enemies standing up. He certainly surprised me. I expected him to retreat in a hail of olives, maraschino cherries and lemon rinds” (BOC 226). A character of Vonnegut’s own fictionalization breaks free from Vonnegut’s control by giving a speech that changes Vonnegut’s life. This break from Vonnegut’s control shows free will, something that Vonnegut has always been unsure of. This show of free will gives Vonnegut hope and ‘renews’ him, which eventually encourages him to approach Kilgore Trout, his pessimistic alter-ego, the side of him that doesn’t believe in free will.

Though the simple act of being able to surprise Vonnegut well illustrates the point in Vonnegut’s mind that free will exists (Rabo has demonstrated it by breaking free of Vonnegut’s own will), the words that Rabo Karabekian said also reinforces this point: “Our awareness is all that is alive and maybe sacred in any of us. Everything else about us is dead machinery” (BOC 226). Though Rabo’s speech is much longer, this quote sums up the main focus of it: awareness is what distinguishes us from machines, and awareness is what gives us free will. He has drawn a symbol of this awareness as a “vertical stripe [of] dayglo orange reflecting tape” (BOC 213). Rabo, by describing this piece of art, enlightens Vonnegut, giving Vonnegut an entirely new way of looking at things for his fiftieth birthday.

As aforementioned, contradictions are popular with post-modernist writers. Vonnegut may have stated quite plainly that he is the Creator of this Universe, yet somehow the universe manages to surprise him. “While my life was being renewed by the words of Rabo Karabekian…” (BOC 229). Vonnegut’s renewal does away with the pessimistic side of him. This tells Vonnegut that he no longer needs Trout, who embodies Vonnegut’s insecure pessimism. Trout’s embodiment of pessimism is proven not only through his character’s establishment and development, but through how he affects others, as well. When Billy Pilgrim reads Trout’s novels in Slaughterhouse-Five, he begins to embrace the fatalistic view of human beings lacking any responsibility due to a lack of free will. When Dwayne Hoover reads Trout’s novel that embraces a lack of responsibility due to everyone simply being predestined machines, Dwayne goes crazy and injures many people. Trout’s pessimism infects others and only causes harm and self-loathing due to a highly pessimistic, fatalistic point of view. It seems pretty clear to Vonnegut, through the actions of these characters, that this point of view isn’t a good one to have, but Vonnegut hasn’t been able to chase it out of his own mind until now. Now, he follows up his rebirth by releasing Trout.

Before releasing Trout, however, Vonnegut begins to suffer from the newfound fear of responsibilities, since he now believes that he is responsible for what he does (having free will does this to people). This free will appears in his characters beyond just Rabo Karabekian now. “Kazak meant to kill and eat me” (BOC 294). Not only does this character, a dog named Kazak, have intentions of his own that certainly don’t line up with Vonnegut’s intentions as it’s writer, but Vonnegut also doesn’t seem to notice the world around him; a world that he has written. “I should have noticed the queer shape of the fence” (BOC 294). It just isn’t possible for someone to not notice something that they have invented, so Vonnegut is telling us that this world is free from him- it has free will.

“I gazed at the Keedsler Mansion, never dreaming that a volcanic dog was about to erupt behind me” (BOC 295). This launches Vonnegut into a lengthy description of how his body reacts to Kazak’s attack. The description clearly paints Vonnegut as surprised by the actions of his dog, even stating that the shock caused his testicles to resend. Once Rabo Karabekian broke free of Vonnegut’s will as a creator (simply by surprising Vonnegut), the entire universe of Vonnegut’s creation became free, which brings with it Vonnegut’s fear of a world of responsibilities, a world where anything can happen and anyone is to blame. “A character as ferocious as Kazak was not easily cut out of a novel” (BOC 294), Vonnegut jokes.

Living in a world unrestrained by the ‘creator’ (the author, Vonnegut), he can’t even turn on a light successfully now. “…and so attempted to flick on the dome light. I turned on the windshield washers instead. I turned them off again” (BOC 298).

“I laughed there in the dark, tried to turn on the light again, activated the windshield wiper again. ‘I don’t need a gun to control you, Mr. Trout. All I have to do is write down something about you, and that’s it'” (BOC 299). Vonnegut’s dialogue with Trout informs us that he is still in control of his world, but the dialogue being immediately preceded by something that he’s unable to do in his own world shows a contradiction of his statement. He transports Trout to prove his words true, but we’re still in doubt over how much control Vonnegut has, considering the actions of Kazak, the dome light, and Rabo Karabekian. Vonnegut doesn’t embrace simple solutions to complex problems, so he offers no concrete answer to this ambiguous contradiction; we’re left to wonder how much control Vonnegut has in this fictional world. Is he a schizophrenic; one unable to control his own made-up characters?

Vonnegut says to Trout, “I want you to feel a wholeness and inner harmony such as I’ve never allowed you to feel before” (BOC 300). This is Vonnegut releasing Trout from his nature of pessimism, letting him feel the things that pessimism (and fatalism) stops one from feeling. “Arise, Mr. Trout, you are free, you are free” (BOC 301). Though it may be debatable as to whether Trout was free once Rabo broke Vonnegut’s conception of humankind’s lack of free will, Vonnegut officially, verbally releases Trout from his life as an embodiment of Vonnegut’s pessimism.

Kilgore’s scream at the end, “Make me young, make me young, make me young!” (302) seems to represent Vonnegut and Trout’s regret for the life of pessimism they’ve lived, though Vonnegut mentions that “I am cleansing and renewing myself for the very different sorts of years to come” (301), which addresses how Vonnegut is looking forward to his new-found perspective in the coming years. In Breakfast of Champions, Vonnegut is taking the advice of Billy Pilgrim and Elliot Rosewater, who, in Slaughterhouse-Five, “were trying to re-invent themselves and their universe. Science fiction was a big help” (Slaughterhouse-Five 101). Breakfast of Champions is a story about the creator trying to re-invent himself, and any story about a human being has only one way to end: