Parks and Recreation: 6 Reasons Why This Show Survives

At the end of each fall television season Parks and Recreation, and its small, but loyal, following, collectively wait to find out if we get to hang with Knope & Co. for one more season. With just a smidgen of Emmy recognition and lots of critical love, I like to think that Parks is safe, come season end, though, and I’m sure I’ll be eagerly awaiting the news. After all, it’s survived season after season of poor to mediocre Neilson ratings, and a network comedy revamping. One can’t help but wonder if the swagger will eventually run out. Nevertheless, Parks is a survivor. Here are my humble offerings as to why it’s hung in there as steadfastly as it has. (Spoilers Included)

6. It’s Not Afraid to Evolve

If you go back to season one, you’ll see the forced attempt to ride the Office’s mockumentary coattails. From the directional style to the Jim Halpert stock character, everything felt done and unoriginal. Pawnee Parks and Recreation blossomed out of that awkwardness and learned to celebrate its quirky government workers. The story eventually found its footing, as well, moving away from the original restrictive fill-in-the-pit-and-build-a-park storyline and finding new directions for all the characters to take. The character pictured above, Mark Brendanawicz (Paul Schneider), was originally conceptualized as the primary object of Leslie Knope’s (Amy Poehler) affections. With the beginning of the second season, however, the subplot was dropped, and Mark himself only made it until the end of that second season.

Even the office curmudgeon, Ron Swanson, is a pop culture hero. This is probably the most biased entry on the list, but I spend way too much time wishing I could celebrate Treat Yo Self Day with Tom, Donna & Ben. And Chris Traeger Literally. Exudes fun and spirit. Each actor really brings a light to his/her performance that never fails to paste a constant smile on my face for half an hour straight every Thursday night. Part of the joy really stems from the fact that the humor rises above people putting one another down; Parks and Recreation is filled with loveable weirdos who come through whenever they need one another.

4. It Surprises the Audience with Meaningful Moments – That Remind Us How Much We Care About These Characters

The most recent example has to be Ben’s proposal to Leslie. Fans everywhere swooned at the two nerdy heroes getting their happily ever after, and the moment was executed so perfectly. Watch it below to savor the moment again! Another highlight – Leslie’s acceptance speech. I mean it got Amy Poehler her well-deserved Emmy nod, so there’s that.

3. It Makes Fantastic Use of Bit Roles and Cameos

This season alone has packed in crazy amounts of political cameos. It opened with Senator John McCain and just this week there was a visit from Leslie’s hero, Vice President Joe Biden. Going through Ron’s love interests offers fantastic performers: Megan Mullaly, Patricia Clarkson, and most recently, Lucy Lawless. What really strikes me, though, is how they consistently bring back the characters that aren’t all that important. Most shows cycle through extras, but about once a season they’ll visit the same Random Doctor Guy, and then every now and then we’ll see the Super Dorky Accountant Man. I took liberties with the names, but it’s not important that we know these characters intimately, just that they continually exist within this world. These small details really make Pawnee feel like living town.

2. With No Guarantee of a Next Season, the Writers Don’t Hold Back 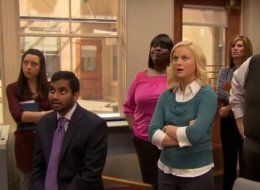 He said their plan would not be impacted by the show’s outlook for another season. “We learned a long time ago that we shouldn’t take anything for granted. For that reason, our motto has been to go for broke,” he says. “Tell every story you want to tell and don’t worry about what comes next. Don’t worry about the future.”

That’s actually a pretty cool mindset for a show to have with no one hedging their bets, Parks and Recreation always goes in fun directions. The show is able to let the story organically grow while still always pushing for the most significant outcomes possible.

1. It Lives in a Fairy-Tale Version of Local Government 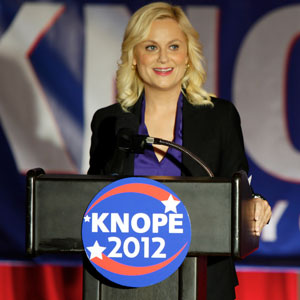 Don’t get me wrong, the writers are regularly guided by real life government struggles, it’s another factor that makes these people so relatable. The difference is in the levity with which challenges are presented and the optimism that can be found within a community. And in this comedic, fairy-tale version of government Leslie Knope is the hero that should totally exist in real life. After a very grueling US election, and lots of ugliness between drawn party lines; it’s amazingly refreshing to watch Parks and Recreation. Yes, they have to deal with bureaucracy, and the same political system exists. But imagine how much faith we could find if there actually were a Leslie Knope out there genuinely trying to make the world a better place. She idealizes all female politicos and truly believes in the good of government. It may sound hammy, but with the cynical state that it’s so easy to fall into now-a-days, it really is a great example to follow. Believe in yourself, believe in your friends, and work towards helping others.

Posted on Nov 16, 2012 by
Rosanne
Rosanne spends her free time hanging out with her husband, constantly searching for films that are exciting, evocative, enriching, or emotional. She also likes alliteration.
Follow