Red Dwarf X Review: The boys from the Dwarf are BACK! 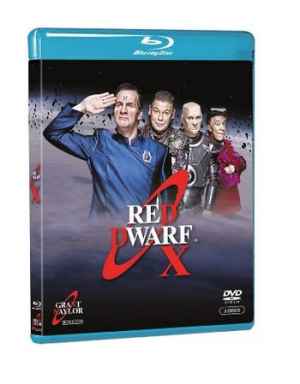 I will admit right at the start; I am a Red Dwarf fan. Sci-fi comedy is a hard sell for some people. There are a lot of fans who don’t like ANY comedy in sci-fi as they feel it is not being taken seriously, or that THEY are being mocked. I do not have that hang-up as I love a little (or in Red Dwarf’s case a lot) of humor in sci-fi. I started watching Red Dwarf, like many other US fans, on my local PBS station. US Public Broadcasting began airing Red Dwarf as Doctor Who was fading in the US and stations wanted something to draw Doctor Who’s audience back. In the UK, Red Dwarf started in 1988 on BBC 2 and was a huge hit. The show lasted for five more seasons before there was a break of over three years caused by the creators of the show dissolving their partnership, legal troubles for a member of the cast and other projects. After the series returned with season seven, several changes made to the format made it harder for fans to re-connect, so the next season brought the show back closer to its original formula.

Just as it appeared Red Dwarf was getting its footing back, my inner fan was crushed to hear that the BBC had decided not to bring back the show for a ninth season. After several years of unsuccessful attempts to get a feature film of Red Dwarf made, the show returned on the DAVE TV network in 2009 with Back to Earth. Back to Earth was not great and while popular in the ratings, it did not please longtime fans of the show. I found it hard to get excited when a tenth series of the show was announced for 2012 and it was with great anxiety that I recently sat down to watch the six episode series on Blu-ray.

As it turns out, I didn’t need to worry. Series X is outstanding! As a refresher, Red Dwarf is about Lister, Rimmer, Kryten and the Cat. They are traveling aimlessly through deep space in search of very little in particular. Rimmer is a ‘hard-light hologram’ of a dead crew member, Lister is a bum searching for his lost love, Kryten is a service droid and the Cat is a descendant of a race of cats from millions of years ago. That is all you need to know to enjoy. Season ten is six episodes in total and the feel of the original show is back along with the studio audience the producers had abandoned for Back to Earth. As is the case with many ‘return’ series, it takes most of the first episode to get the full rhythm of the cast back in sync but once that happens these episodes are revealed as some of the best episodes of Red Dwarf’s ten seasons so far.

It is difficult to pick a standout episode as they are all wonderful and funny but the one that sticks in my mind the most is Lemons. In Lemons the boys from the Dwarf accidentally travel back in time (something they have done many times now in the show’s history) to 23 AD. The only way for the crew to get back is to use the remote that they carried with them, unfortunately the remote has no batteries. Deciding they will make a battery out of lemons, they have to walk across half the earth to find some. Many months later they arrive in India and find not only the lemons they need but Jesus as well. As irreverent as this all sounds, it is a hallmark of the humor in Red Dwarf. This is a show that began all those years ago with the death of the entire crew of the ship after all. Past stories have also included plots revealing that Lister is his own father and that the crew of the Dwarf were responsible for the JFK assassination, so the writers of this show clearly have no fear of offending anyone.

There are elements in all six episodes that are as funny as anything in the show’s long history and we finally get to see greater development with Lister and Rimmer’s characters. Many previous episodes of Red Dwarf had sacrificed story and character for a good joke but that is not done here. All the humor in season ten is organic and comes from the established characters we know. Similarly in previous seasons, the episodes at times looked like all the attention was focused on effects instead of story. In series ten we get decent effects (the show’s odd and slightly cheap-looking effects are often part of the humor) without sacrificing any of the show’s other elements. While the humor in Red Dwarf is a bit off-beat the stories in season ten are sharp and well thought out. The simple and silly tone of the stories conceals some very tight and clever plotting. Subplots and the main story of these episodes intertwine at several points and do so effortlessly. The cast is as strong as ever and there is never a point where you feel any of them have lost their characters.

A great feature of this Blu-ray release is the second disc. While all six episodes are on disc one, disc two contains all the special features including a two hour ‘making of’ documentary called We’re Smegged that goes into great detail on the production. That documentary is worth the price of the set all by itself but there are also deleted scenes and Smeg-ups (Red Dwarf speak for bloopers) that round out this package perfectly. In short, this is a great Blu-ray set for anyone that likes their sci-fi with a bit of silly mixed in for good measure. For any returning fan of the boys from the Dwarf, this is the series you remember at its best!

Posted on Feb 9, 2013 by
Taylor Ramsey
While I quietly wait for a really good excuse to go on an interstate mayhem spree, I read comics and watch movies. While I do the "writing" here, my wife makes it readable.
Follow