The Curious Case of ‘Reign’: Putting the Fiction in Historical Fiction 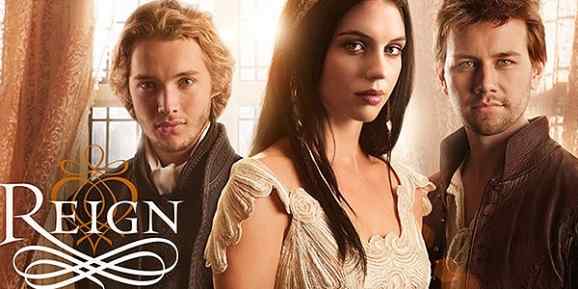 I promise I will get to historical fiction, but in the meantime, please allow me the indulgence of a small digression.

I have a strong aversion to Miley Cyrus. The most popular term here is ‘hate’, however that term is bandied about so much these days it has lost any of the meaning it originally had. Aversion is the most appropriate term, being that her presence on my television or computer screen causes me to break out in a nasty case of grumpy-mouth. You know what I am talking about, the grimace that spreads over your face like an infection when confronted with a particularly distasteful image or phrase. This reaction is not limited to pop-starlets, many women would be familiar with this expression due to the prolific nature of “Get back in the Kitchen!” as a ‘joke’. I sure will get back in the kitchen. That’s where the knives live.

I digress (again). Cyrus represents everything that the nightly news complains is ‘wrong’ with my generation, and that sucks. Do you know how hard it is to defend and popularise the brilliant, intelligent, witty and creative minds of youth when this young woman insists on ‘twerking’ with her tongue sticking and calling it feminist (yes, feminist)? Whoever told her that tongue waggling and bum-jiggling was sexy must have had a weird fascination with dogs.

Damn it if Wrecking Ball isn’t catchy, though.

It’s a difficult (first world) problem, knowing that a song so emotional and strong is sung by a misguided young woman with a penchant for dancing with her tongue out like a sweaty rottweiler. The video is deplorable, and has more to do with wrecking her Disney image than anything to do with emotional turmoil/construction, but I just can’t get that song out of my head. This brings me to the point: what do you do when you love something created by people you don’t like? When it feels wrong, but right? When its very nature should repulse you?

Reign is a 2013 series that just aired its mid-season finale on the CW network in the U.S. This historical series centres on the life of Mary, Queen of Scots, in her time as a prospective bride for the Dauphin (Prince) of France in the 16th century. It is also demonstrably awful. Made by the same people who created Gossip Girl (red flag), the series is more interested in creating romantic turmoil and drama than in any semblance of historical fact. The music is modern (Bastille’s Pompeii second episode), the clothes are more at home on a Paris runway than a Renaissance palace, and the very first scene has a 17-18 year old Mary playing football (soccer) in a convent. Let that last one sink in for a moment, I’ll wait.

The main plot of the season revolves around a love triangle between Mary, the Dauphin (Francis) and his half brother Bash. Yes, Bash, that famous French name. In the wings is a villainous Catherine de Medici, scheming against Mary’s marriage, as she has been told by a suspiciously-young-and-ruggedly-hot Nostradamus that the Queen of Scots will be the cause of her son’s death. Minor characters include a bevy of beautiful and utterly interchangeable ladies-in-waiting, whose various affairs with servants and royals are too bland to comment upon. The only remarkable thing about them is that one of them is called Kenna, yet another famous historical name.

If you will permit, I would like to give you an ever-so-brief history lesson. Mary is hardly the heroine that The CW is desperate to portray. What they want (and are desperate to show) is a headstrong, intelligent, politically minded young woman who will stand by her nation even when threatened with personal peril. Whilst it would be wrong to call the historical Mary a pushover, her reign in Scotland could hardly be called positive, and it was her disastrous relationship with Elizabeth Tudor, as well as her unfortunate marriages, that brought her down.

She impulsively married the mincing and jealous Lord Darnley in 1565, and later caused great controversy when she then married the lead suspect in her husband’s murder, Lord Bothwell, in 1567, only a few months after Darnley’s demise. She was later imprisoned by Elizabeth I under charges of treason, and whether this is true or not, there is indisputable evidence saying the Mary affected the arms of England from the moment Elizabeth’s sister died, making her claim explicit. Later, ‘evidence’ was found that implicated her in a plot to take over the throne of England, leading to her beheading. I wonder, will her execution be in the third or fourth season of Reign? My point here is that there are hundreds of strong-minded women from that era (or thereabouts) that they could have chosen. Elizabeth I. Anne of Cleves. Mary of Guise. Isabella of Spain. Even Catherine de Medici, well known for her controversial and bloody role in history, could have made a great heroic antagonist in the vein of Tony Soprano or Walter White.

There is nothing that should endear me to this show . . . and yet, I keep coming back. Fans of The Big Bang Theory might be with me here, in that they know there is very little to commend the show, but it has a sense of charm and ingenuity that is lacking from many other programs. Dare I say it, I might even enjoy this program more than others such as The White Queen or even the very popular The Borgias. I’m not going to try and weasel out of it either by saying I enjoy it ‘ironically’, not only because that is misusing the term but because I genuinely enjoy the program and become engrossed in the story lines. I can only compare it to how I originally started saying ‘yo’ as a joke to my friends, and yet now I find myself answering the phone in that manner. (If you don’t get why that is wrong, just imagine the whitest girl you know. I make her look like Shaft.)

I think that the actors who portray Catherine and Bash (actual name Sebastian) are quite talented at showing different sides of their characters. The latter’s personal growth is not limited to choosing between loyalty to his royal half-brother and desire for Mary, he is also torn between the ambition of his mother, the maitresse en titre Diane de Poitiers, and his allegiance to the philandering King Henri. Catherine is by far the most complex and interesting character, evolving from a one-note villainess in the premiere to the brave, yet conflicted character we see in the mid-season finale. The writers could easily have had her become a Livia, a woman obsessed only with power (and those too weak to seek it). Instead, while we may not agree with her decisions, we are always privy to the motivations behind them.

Why is it then, that I am capable of forgiving such blatant disregard for history, when history itself is how I make my living?

I should be laughing this series off the face of the planet, and yet I still tune in religiously (but carefully, knowing religion isn’t safe around the Medici family) every week. I wish I could pass it off as [HISTORICAL SPOILERS AHEAD] sadistically anticipating the crushing blow that Francis’s early death will be to his inevitable fan girls, but it simply isn’t so.

I think that, perhaps, I accept Reign based on the fact that it makes no claims for historical accuracy. The inaccuracies in The Tudors and The Borgias are all the more egregious when one discovers that each series attempts to portray “real” history. Reign, for lack of a better phrase, just couldn’t give a toss (no, I don’t really mean ‘toss’). If you are going to throw out any semblance of a relationship to history within the first episode, then I have no issue at all in watching your show. It’s jut another show. Who knows, it might even encourage more people to read about Mary and Catherine. In retrospect, this is easier to deal with than my issue with Wrecking Ball, because if you make no claims to quality, there is no place to go but up.

This brings me to my final point. Isn’t it time we made a new genre for shows like Reign? Or perhaps, we need to reclassify The Borgias and The White Queen. ‘Historical fiction’ just doesn’t cut it when we have such a large differentiation between claimants for the genre- it’s like saying The Vampire Diaries and Breaking Bad are both just ‘dramas’. It’s true, but each has it’s own individual characteristics that make them almost completely different. The only reason that they are both ‘dramas’ is because characters don’t slip on banana peels or spray water on each other with prop flowers. Similarly, Reign and The Tudors have time period in common. That’s it. That’s like saying Sesame Street and The Wire are the same because they both have streets.

I suggest splitting it into historical drama (Tudors, Borgias) and historical fiction (Reign, Da Vinci’s Demons, Labyrinth). Yes, ‘fiction’ is a broad term, but differentiating them this way will allow audience members to see what you are getting, and it will allow VERY SERIOUS HISTORIANS to avoid the inevitable rage when confronted with Reign. Because, let’s face it, however fantastic it is, it really puts the ‘fiction’ in historical fiction.