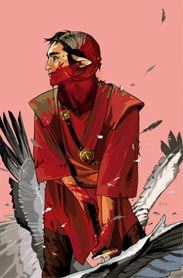 It’s finally back, and the wait was worth it.

Letters and design by Fonografiks

After three long months of anticipation, Brian K. Vaughn and Fiona Staples’ sci-fi epic Saga returns. Issue #7 begins with a flashback of our hero, Marko, as a child. This opening scene presents us with a bit more background on the war between the planet Landfall and its moon, and Marko’s home, Wreath. After the flashback, Alana, Marko’s wife, must deal with quite the situation: meeting Marko’s parents.

With just a brief introduction at the end of issue #6, Marko’s parents now take center stage. I was somewhat surprised with their calm reaction to finding their son and anticipated for them to be much more hostile. Marko had abandoned the military and was now married to the enemy. However, Marko’s father’s reaction is somewhat explainable by what he tells Alana later in the issue.

Brian K. Vaughn has once again scripted a fantastic issue. His expansive universe and cast of characters are presented with expertise. Also, Vaughn’s dialogue is among the best this medium has to offer. Each character’s voice feels distinct and personal, and Fiona Staples’ art doesn’t hurt either. After reading this book, I can see why the delays were necessary. Character faces are expressive and believable, and the backgrounds—ranging from the lush interior of the spaceship to the destroyed wasteland of a planet—are immaculate. It appears Staples has made great use of the extra time between issues #6 and 7. It’s also worth mentioning that Staples really does know how to draw some gross-out monsters.

Saga #7 was well worth the wait and delivers on all fronts. If you are still holding out, try to track down the first six issues or the trade collection, otherwise issue #7 may be the best jumping on point for a while now.

Posted on Nov 15, 2012 by
MaxFrederick
Max Frederick is a bad enough dude to rescue the President from ninjas. He also writes sweet stuff about comic books. Check out his blog at comicconectionblog.wordpress.com
Follow