Park Chan-wook is considered one of the best directors working in Korea. He is the award winning writer and director of titles like Joint Security Area, Thirst and the hugely respected Oldboy. 2013 will see the release of his English-language film debut Stoker in theatres. Here is the trailer. 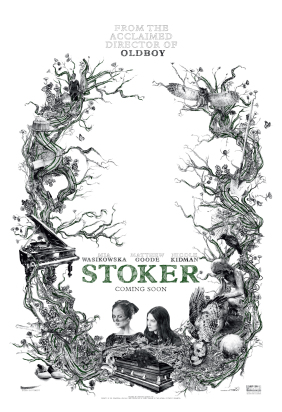 Stoker (Wasikowska) who finds her world changing when her father dies in a car accident and her emotionally unstable mother Evelyn (Kidman) introduces a mysterious uncle named Charlie (Goode) into their house. India finds herself gradually coming under Charlie’s influence and she discovers he has quite the dark side which draws her into bloody events.

Mysterious uncle with a dark side moving into town? Sounds like Hitchcock’s classic Shadow of a Doubt (1943). The writer is Wentworth Miller, star of the TV series Prison Break, and he claims that film as an influence alongside Bram Stoker’s Dracula and while there are no vampires with bared fangs running around, the trailer reveals a lot of darkness in a film that seems to be a cross between a dark family drama and a psychological horror.

Stoker stars Australian actresses Nicole Kidman (To Die For) and Mia Wasikowska (Jane Eyre) and the British actor Matthew Goode in the main roles with support coming from Dermot Mulroney and Jacki Weaver.

Since Park Chan-wook is directing we can expect the dark tone to be maintained, as anyone who has seen his films can attest. With Thirst he turned the Émile Zola’s dramatic and naturalistic novel Thérèse Raquin into a deliriously bloody, blackly humorous and sexy horror film with vampires in a clever take on the sordid love triangle. With Oldboy, Park Chan-wook took a Japanese manga and turned it from a thriller into a sadistic tale of revenge and perversion that ends on a daringly dark note. All of his films have had a distinct visual style that is part expressionistic and it seems from this trailer that he has maintained his form here.

Posted on Nov 15, 2012 by
Jason
A writer and cinephile with a deep interest in Asian film, music, culture and anime.
Follow