‘The Collection’ Review: Rare horror sequel dares to be different

One of the hallmarks of the horror genre is the seemingly relentless pedigree of sequels (how many Paranormal Activity movies are there now, six?). Over the last thirty years, fans of fear have proven that they are willing to cough up the $9 for admission into a movie that they have seen time-and-again; they want more of the same, and the studios deliver. However, Director/Co-writer Marcus Dunstan has taken the Aliens approach to this sequel of his 2009 slasher flick The Collector, thus proving that you can have more of something while at the same time still be distinguishing yourself and establishing yourself as relevant. And that they do.

As per horror movie uge, we get about ten minutes of exposition, which establishes the characters (both new found and recurring) and then we jump headlong into the slicing and dicing. In one of the establishing sequences, the Collector mows down an entire rave of adolescent party-goers, thus perfectly establishing the tone for the rest of the movie: absolute ludicrousness!

Much like how Alien established… well, the alien, and then Aliens dug deeper into the mythology, The Collector establishes the Collector and now we get to see his collection. Not much is directly stated about this collection, but one of the best traits this movie has is in allowing the audience to draw their own conclusion based off of what they see; effectively, we get to expand the mythology for ourselves and seeing is how Dunstan and co-writer Patrick Melton have both worked on the earlier Saw films, whatever we come up with isn’t going to be very pretty. 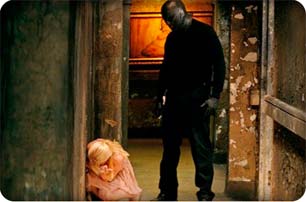 In fact, another thing that scared me was the frighteningly realistic attention paid to the character of the Collector. We never see his face, he only has one line, and his motive for these seemingly random murders is never made clear. This makes for an even scarier antagonist to be sure; but yet, you cannot help but feel what is undoubtedly a human presence beneath the mask; you can see the anger, fear, and, ultimately, the sorrow in his eyes. This down-to-Earth take on a mass murderer must largely be credited to Randall Archer’s undeniably heartfelt and scary performance.

Perhaps the best thing that Dunstan and Melton do with this movie, however, is… whatever the hell the want to! They had fun making this movie and their enthusiasm comes through the screen in waves and soaks into your skin. From the absolute ludicrousness of it all to the level of audience participation, both with the expanded mythology and the killer himself, The Collection just good tongue-in-cheek fun!

Posted on Nov 29, 2012 by
Jordan David
Born and raised in the Great Lakes State of Michigan. I work as a projectionist at the local movie theater and study film/ video at Grand Valley State University.
Follow