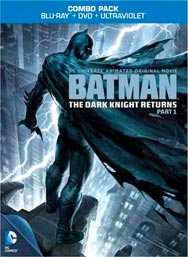 I have to confess up front that I did not expect to like this new Warner Premiere animated movie The Dark Knight Returns part 1. The trailers made the movie look absolutely ridiculous. I feel very sentimental about the book and feared having this beloved masterpiece made into a movie. To say my expectations were low would be an understatement. The good news is the movie is good. It is REALLY good!

As with any attempt to adapt a book to film, changes have to be made. For the most part these changes work well and are very minor. There are a few instances where the source material is softened up, but just as many where the adaptation makes the scene MUCH more violent or dark. Some of what is excluded from the movie is what made the comic so interesting and fresh in its day. For example; the narration captions of Batman’s inner monologue are gone, and without them vital information is lost. In one scene when Batman is on the tower waiting for Harvey Dent to make his move, he checks his utility belt. In the original comic the monologue gave the reader insights into Batman’s mental state and physical condition that are now missing in the movie. Some of the dark humor from the original is lost for the same reason. The “the scream alone is worth it” line that gave me chills and the “thoughts like that keep me warm at night” moments that were in the original are different now because of the loss of any narration. Little moments are always the first to suffer in adaptations. While the feel of the story aches for these losses, they are not fatal flaws. Anyone unfamiliar with the original work will not notice their absence.

A real treat of the movie is the new Robin, Carrie Kelley. The character comes to life here in a way I never would have expected. In the movie Robin is more vibrant and full of life compared to the original character. She provides Batman focus to keep him from going over the edge just as the original Robin did. Carrie also provides the fans a connection by being a normal kid with a godlike worship of Batman. One flaw of the movies is some of her dialog, and that of the mutant gang, does not work as well as it did in print, but it is a minor issue at best.

The art design tries its best to capture the look and feel of the original Frank Miller art, and even succeeds some of the time. It is the nature of animated adaptations that prevent a completely faithful representation of the original visuals, but DK pt. 1 does a decent job. For the most part things look very nice and the animation does its job well. There are a few cases where the animation is rough and choppy making it feel a little like a cheap 70’s cartoon. With very little banding or video aliasing present, the technical quality is as good as it can be. While I liked this movie, it seems that more and more of these DC animated features are a little rushed.

Where this movie fails, if it really can be said to fail in anything, is the timing of its release. The movie feels like it should be a part of the Christopher Nolan Batman trilogy but was not released until several weeks after The Dark Knight Rises. That was a mistake. The cartoon has many references that recall the live action films. This makes sense since parts of the original Frank Miller graphic novel were used in Batman Begins. Seeing those cues the cartoon only serves to strengthen the connection between the animation and Nolan’s trilogy. The music is wonderful and seems at times to be borrowed from Escape from New York and Nolan’s Inception.

This movie is just part one of two, with the second due early in 2013. Since the original graphic novel was four issues telling two largely separated stories, dividing the movies works well. It goes without saying that the original Frank Miller graphic novel is better than any adaptation. However, this movie works very well as a companion to the original volume and should not be dismissed. Any flaws present are due almost entirely to the nature of adapting one medium to another, and should not count against this fantastic film.

Is the World Ready for an LGBTQ Disney Princess (or Prince)?
The Appeal of the female characters in Arcane: League of Legends
The nature of Self in Centaurworld
Steven Universe and Fascism
Disney’s Live Action Remakes: Who are they for?
Children’s Animation and “Bad Behavior”
Adults Watching Children’s Animation