‘The Dragon Prince’ Preview: Why You Should Keep an Eye on this Upcoming Production

Dragons have always been a common feature in different forms of art in both the East and the West – from being used in ancient Chinese interior design and proverbs to being depicted as the ferocious, mythical creature in Harry Potter and the Goblet of Fire (2005) or The Game of Thrones (2011- ). Both cultures view dragons differently, and we seldom see work that tries to combine both Eastern and Western elements of dragons. Such a trait is what the upcoming film – The Dragon Prince – aims at achieving.

The Dragon Prince is produced by Trico Films, a Washington-based film production group founded by triplets Dylan, Jesse and Miles Stipek. A relatively young company in its twelfth year of production, it has won a couple of major awards at the National Film Festival for Talented Youth with their original productions, and has had official selections each year. Its work has caught the eyeballs of many, including Sir Anthony Hopkins, who talked to the triplets about story ideas and hinted that he would be interested in a role if the triplets wrote one for him. 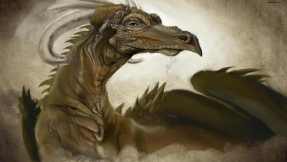 Originally, director Jesse Stipek wanted to do a remake of the 1982 animated film, The Flight of Dragons, and Dominic Monaghan (perhaps best known for playing Charlie in the TV-series, Lost) was going to take a lead role. However, due to legal issues concerning copyrights, Stipek decides to create an original work instead, and hence the birth of The Dragon Prince. Through this movie, Stipek and writer Michael Chase Walker hope to create a story unlike anything before: one that blends both Eastern and Western dragon mythology in an original tale of love, bravery and, most importantly, what it means to be ‘human’. A brief glimpse into the synopsis of the film:

A legendary dragon slayer is cursed to become a dragon and suffer the constant harassment of a thousand insufferable fools who wish to kill him for fame and fortune. When his own inept son shows up, convinced he is the monster that slew his father, The Dragon Prince must teach the boy enough of the skills to combat a real dragon while managing to stay alive himself.

One major topic of discussion in The Dragon Prince is cultural difference, something that has fascinated moviegoers for long. One notable difference between the East and the West is the attitude in treating dragons – figures to be worshiped in the East yet often demonized in the West. The film will twist this way of binary thinking to show a combination of both relationships and how that applies to the characters – ultimately, how we handle relationships with other ‘humans’ and what it means to be ‘humans’, when the Dragon Prince has become a dragon/human hybrid and is being hunted down by his own son. This will not be your typical ‘good vs. evil’ movie; instead, it will be a psychological fantasy that deals with the characters’ inner struggles and challenges the audience’s perception of what is right or wrong.

A film of such will need a vast amount of stunning visual effects, and the production cast won’t disappoint. Members from renowned studios such as Pixar, Weta Workshop and BluFire Studios will assist in the visual effects department, led by animation supervisor and executive producer Tim Everitt. He has worked on blockbuster films such as Pirates of the Caribbean: At World’s End (2007), Blood Diamond (2006), and also in renowned independent films like Sideways (2004). A very experienced animation supervisor in the industry and an award-winning writer/director himself, he knows what it takes to bring the dragons to life and how to make the audience gasp in excitement with the fascinating effects.

In the music department, Carl Johnson and Rodney Gates will be in-charge of musical score and sound design respectively. Carl Johnson is a famed composer and orchestrator in the industry whose work includes Skyfall (2012), The Amazing Spider-Man (2012) and Wall-E (2008). Rodney Gates is the audio director of Sony Online Entertainment, known for creating many outstanding video games such as the EverQuest series (1999- ) and Planet Side 2 (2012). Together, they will create the kind of poetic, mesmerizing sound similar to what Shiro Sagisu has brought to the classic Japanese anime, Neon Genesis Evangelion (1995), and its subsequent movies.

Any special effects or music won’t be able to impress the viewers without a strong plot, and writer Michael Chase Walker is guaranteed to deliver. Walker was an associate producer of The Last Unicorn (1982), an animated film produced by Topcraft, or commonly known as the predecessor of the famed Studio Ghibli nowadays. He has written books about screenwriting, lectured in colleges about screenwriting, and is a screenwriter himself with many credits to his name. With his years of experience in screenwriting, he is guaranteed to deliver a strong script for this film.

Ultimately, director Jesse Stipek really wants to make a great dragon movie ever since he watched The Flight of Dragons (1982). Growing up watching the legendary anime Dragonball (1986) and being influenced by Hollywood movies like DragonHeart (1996), he aspires to use this movie to capture the sentimental and honorable values of dragons, something that are often neglected in modern series featuring dragons. With the help of the distinguished production crew, he promises to bring to the audience something they have never seen before.

The Dragon Prince is currently in production. The trailer will be out by April, and the film will be released online and in a few selected theatres in 2015. For its latest news, please check out their official Facebook page or Trico Films’ own Facebook page. Be sure to keep an eye on this wonderful production if you want to enjoy a story of much exceptional quality!