The Host Trailer: another Twilight or slightly better?

There is no doubt that when it comes to Twilight, despite that some might hate the movie as much as some love it, everybody had certain feelings when the saga ended this summer. Now, though it is the end of Bella and Sparkles and Wolf-boy, Stephenie Meyer does not seem to be going away that easily – her novel The Host will be on screen next year on March 29th. Therefore, the question on everyone’s mind should be: is The Host going to be as popular just because or is the movie going to offer some cinematic awesomeness and emotive acting? 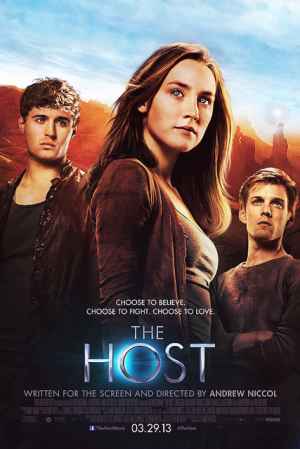 There are two people who could turn around some of the negative opinions towards Meyer’s story about aliens taking over human bodies, first is Andrew Niccol, man behind the script and the camera. His previous movie experiences similar to the upcoming one include Gattaca and In Time, but he was also the guy who wrote The Terminal. Despite this, Niccol does not seem to have any experience with teenage flicks but not that Catherine Hardwicke’s Thirteen helped her with the first Twilight. Saoirse Ronan is the exciting part of The Host, having many great roles including an emotional one in the romantic drama Atonament and a physical one in the action packed Hanna. Based on her body of work, the Irish actress would most definitely give Kristen Stewart run for her money and The Host could end up being less annoying than the finally ended Twilight saga installments.

Still, Stephenie Meyer’s writing might affect everything despite the names behind the movie, because her story telling seems to be attached to the same elements: love and some kind of a love triangle. I have not read the book but I am assuming this based on the poster which clearly showcases a girl and two guys, most likely I am not the only one thinking it is just like Twilight but with aliens! Although, there are some things in the trailer that indicate a big difference, the leading girl seems to be much stronger and less annoying, but that could also be Ronan’s acting and confidence. Finishing off with the final reason why The Host might appeal more to those who hate Twilight, the sci-fi factor: when sparkling vampires did not do it for you, maybe people with injected aliens will win your heart.

So the verdict is: The Host really could end up in a more sophisticated place and not just because of its leading lady being charismatic and talented, but because Meyer’s story of hosting aliens in one’s body might be a more interesting one than the plot with a love-sick teenager dating a vampire and constantly giving the werewolf mixed signals.

Posted on Dec 8, 2012 by
Getter Trumsi
Student by day and a movie-blogger by night, I love to watch movies and TV-shows but not as much as I love writing about them.
Follow