The Muppet Movie: Ambition and Optimism

In the month of June, the Muppets celebrated the fortieth anniversary of their first feature film. While Jim Henson’s beloved foam posse had their ups and downs since their creator’s passing, with Muppets Most Wanted’s box office performance and the early cancellation of the 2015 series being particularly recent downers, their spirit never failed to be hopeful.

The Muppet Movie is the embodiment of the meticulous nature of the artistic craft imagined by Henson and his crew, and the nearly endless idealism of the Muppets themselves.

The film was one of, if not the first of its kind for the franchise. It put the Muppets out of the comfort of their vaudeville-inspired theatre (or fictionalized New York borough, if one counts the Sesame Street cameos) and turned them into fully integrated parts of our world. For an entire hour and a half, viewers got to see the Muppets being themselves without necessarily having to perform any sketches or deal with offstage antics. The movie distinguished itself from its small screen counterparts by incorporating several full body shots, convincing depictions of the Muppets doing everyday tasks or a mix of both. The first scene greets us with tons of Muppets, from the cast’s core members to more minor characters, sitting in a movie theatre, fully body and all. We later get to see Fozzie Bear drive a car and play a guitar (with his entire body in the frame during the latter). We get to see the entirety of Gonzo fly up in the sky as he holds onto a bunch of balloons. We get to see all of the major Muppet characters confront the film’s antagonist in a way that also put their entire bodies in the frame, instead of using the traditional ‘from the waist-up’ approach, which could’ve easily been taken by the crew. And who could forget the iconic scene where Kermit sings “Rainbow Connection” in the middle of a swamp, banjo in hand, or Kermit riding a bike? 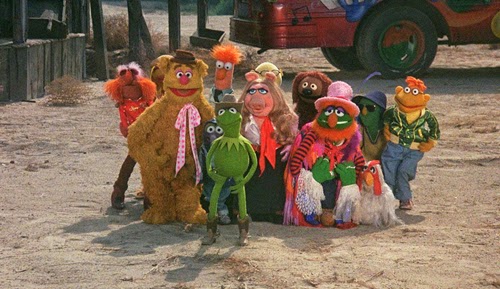 This was also the film that enriched the Muppets as a cast; without the restrictions of The Muppet Show, they could finally interact with everyone else in the gang, instead of being limited by their performers’ availabilities. The Muppet Movie brings back the relationships established in The Muppet Show, and it allowed characters that share a performer to interact with one another, something almost inconceivable at the time. Jim Henson’s Kermit and Rowlf, Frank Oz’s Miss Piggy and Fozzie, Richard Hunt’s Scooter and Janice; all examples of the film breaking the traditional mould developed by The Muppet Show’s production cycle. Logically, this results into the film ending off with a shot of almost every character introduced at the time that could be considered a Muppet singing the final lyrics of the last song.

These technical marvels are all fine and dandy, and so is the full realization of the Muppets as a collective. However, they wouldn’t be complete without the dazzling charm the characters bring to their world and the message they preach. They are why The Muppet Movie should still be celebrated forty years later.

Beyond its achievements in special effects and its cultural significance, it’s a tale of one’s dream coming true. It showers you with optimism that becomes a breath of fresh air after confronting a frequently harsh reality every second of your life. The quirkiest of misfits, whether they’re a banjo-playing frog who’s being targeted by a guy that wants to cook their legs, an aggressive wannabe diva pig, a porkpie hat-wearing failure of a bear comedian, or whatever Gonzo is supposed to be, can find their place in the world, and even the industry they want to work for. Even Sweetums, who spent the entire film running at the Muppets’ car, desperately trying to catch up to them, finally reached his goal of catching up to his fellow Muppets by the end.

The film humanizes the Muppets (animal, monster, or otherwise) and makes them even more rounded by using established notions about them in previous reiterations of the franchise. Kermit casually playing the banjo in his swamp gives the viewer, used to the frog being the level headed but stressed out leader of the gang, a much more naturally relaxed side of him. This is the film that told us that Gonzo was not just a sadomasochistic, chicken-loving daredevil whose species reeks of ambiguity, but a somewhat lonely soul whose uniqueness is as much of a blessing as it is a curse. It indirectly justifies Fozzie’s neuroticism by showing us that Statler and Waldorf were never his only hecklers. In fact, Fozzie can probably endure most of Statler and Waldorf’s shenanigans because he has performed for a much more aggressive audience in the past, as this movie suggests. Scooter, the backstage gofer who went from being manipulative because of his uncle’s ownership of the Muppet Theatre to being a close ally of Kermit and the gang, is introduced alongside the Electric Mayhem, by far the most bizarre pairing (or perhaps grouping) in the film. If we can see him casually hang out with the resident hippie rock musicians, maybe there is more to the guy known for warning the celebrity guest that the show is about to start than we thought.

In a cultural realm where exploration of darker and more depressing topics is becoming more accepted, and more expected, revisiting a saccharine but heartwarmingly jolly tale like The Muppet Movie can be quite the refreshing experience.